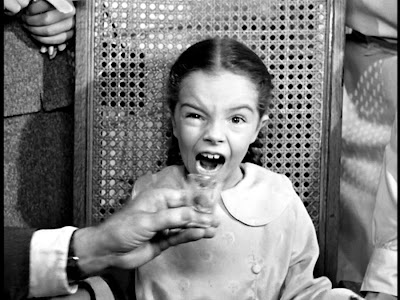 Raging alcoholism was the only way little Becky could cope after enduring Mike Myers in THE CAT IN THE HAT.
Posted by Bunche (pop culture ronin) at Wednesday, April 29, 2009

The hottest new trend in underground nightclubs involves "tapping" young girls by collecting their vomit which, when mixed with tequila, provides an almost ethereal hallucinogenic high.

Way ahead of you, John. We pioneered that shit at the barbecue joint years ago and dubbed it "Squelch."

As this photo of early alcohol abuse shows, we can surmise much about how Minnesota representative Michelle Bachman got as bat-shit crazy and blindingly stupid as she is today.

Isn't that a scene from THEM?

"Isn't that a scene from THEM?" Good eye, John. Give that boy a fish!