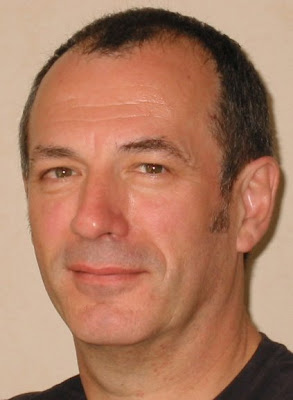 Living legend comics illustrator Dave Gibbons hits the big six-oh today, and I'm sure I speak for comics appreciators the world over when I extend him a very happy birthday. Best known for his seminal work on WATCHMEN, Dave's career has birthed many indelible efforts, but if you ask me his crowning achievements are WATCHMEN (well, duh!) and three other stories that kicked my ass when I first read them and still blow me away to this day. 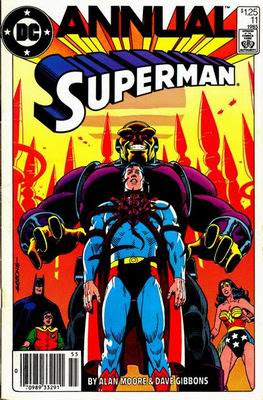 SUPERMAN ANNUAL #11, containing one of the all-time classic Superman stories.

First is "For the Man Who Has Everything" (SUPERMAN ANNUAL #11, 1985), written by Alan Moore — Gibbons' future collaborator on WATCHMEN — and featuring Superman on the wrong end of one of the most diabolical bits of psychological/emotional torture on record. I won't spoil the surprises, but this one was a classic right out of the gate and the struggles against the world-conquering Mongul while Superman is incapacitated are truly impressive, particularly the complete and utter defeat of Wonder Woman after she suffers a broken arm and gets launched through one of the Fortress of Solitude's walls. And if you ever wondered how scary it would be if Superman ever got really, really angry, this one is a must-read.

In another unforgettable Alan Moore collaboration, the TALES OF THE GREEN LANTERN CORPS backup story "Mogo Doesn't Socialize" (GREEN LANTERN Vol. 2 #188, May 1985), readers learn of the reclusive Mogo, a member of the intergalactic/inter-species Green Lantern Corps police force who may be the most unique of the Corps' members by virtue of being a sentient planet. 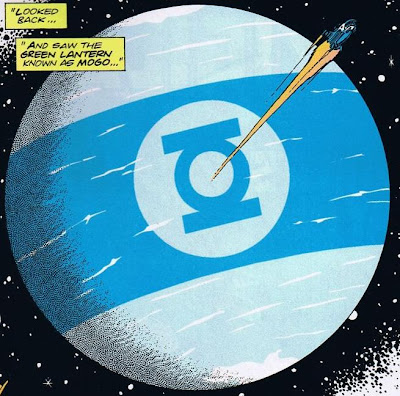 The simultaneously ridiculous and awesome Mogo.

The setup for the reveal of Mogo's true nature is quite intriguing and when the punchline comes it is at once both totally laugh-out-loud ridiculous and completely awesome in every way. Simplicity itself, I just plain love this one.
Though it gets mentioned third, my absolute favorite Dave Gibbons story is a four-part Pat Mills-scribed installment in 2000 A.D.'s classic RO-BUSTERS series, "The Terra-Meks" (2000 A.D. Prog #98-101, Feb. 1979), featuring the greatest giant robot hero ever, namely Charlie, a sweet and humble mechanical colossus who acts as a sentient tugboat for the harbor of the future city of Northpool. 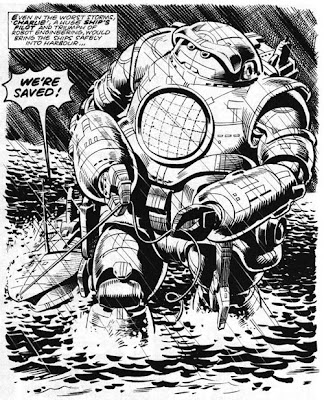 Balls of steel and a heart of gold: Charlie at work.

Working tirelessly and selflessly, Charlie is beloved by the townspeople, and he repays that love a thousandfold when evil and unscrupulous developers set out to raze Northpool without caring one whit for the homes or safety of its inhabitants. As the gigantic and destructive Terra-Meks (sentient and uncaring demolition robots) launch a campaign of urban renewal that amounts to heavily-armed assault, Charlie violates his obedience programming, picks up a construction girder and sorts out the Terra-Meks in a symphony of robotic carnage that still leaves me breathless. The climax is one of comics' greatest tear-jerkers, and while he may not agree with me, I consider the work done on this story to be the finest of Dave's career. WATCHMEN may be the work of a more seasoned draftsman, but the story of Charlie remains unparalleled in 2000 A.D.'s annals for the depth of feeling and humanity it puts out there. This story stuck with me from the moment I first read it in a Titan Books collection in the mid-1980's, and when I first met Dave at a con sometime around 1988, he was doing sketches for the fans, mostly of WATCHMEN's Rorschach. When my turn on line came, I asked him for Charlie and he looked rather surprised that an American knew that story, but he made my day by rendering the Hero of Northpool. I have nothing against Rorschach, but given a choice of having an original drawing of his psychotic ass or one of the genuinely heroic Charlie, there's only one choice for me. 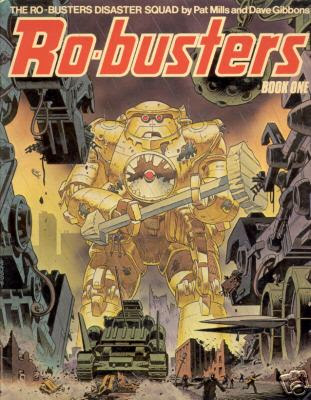 The cover of the reprint edition where I first encountered Charlie. 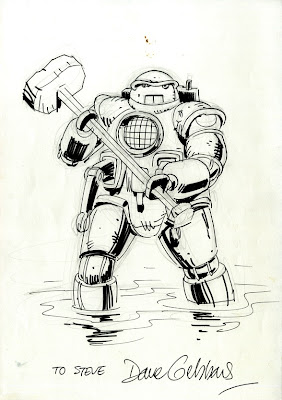 My Gibbons original of Charlie, one of the crown jewels of my collection.

So with that I'd like to conclude by stating how fortunate I was to have worked with Dave in a professional capacity on his graphic novel, THE ORIGINALS, and I can tell you honestly that he was a delight to work with. In fact, next to John Romita, Sr., Dave may be the one titan of the comics biz about whom nobody has even one bad thing to say. Consummately talented, an editor's dream to work with and an all-around terrific guy, I salute Dave Gibbons on this day of days and wish him continued success and nothing but the very best.
Posted by Bunche (pop culture ronin) at Tuesday, April 14, 2009