I CAN'T EVEN THINK OF A SUITABLE HEADLINE FOR THIS 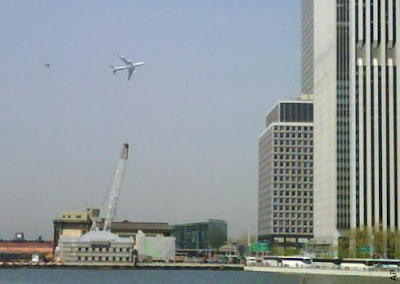 Yesterday's lower Manhattan photo-op low altitude flyby of one of the planes used as Air Force 1 was ill-conceived enough, but to have it tailed by a couple of fighter jets? I cannot believe that no one involved stopped to consider how the public might react to such an unexpected sight, especially considering where it took place and just how fresh the memories of the 9/11 tragedy is in people's minds even almost eight years later. And, if the news reports are true, the officials who authorized the flyby actually alerted various NYC offices but advised them against informing anyone about it. Clearly not a single brain cell was engaged during all of this and I'm simply appalled.

I was not at the World Trade Center when the planes hit, but I was in an elevated train going over the Manhattan Bridge late that afternoon and saw and smelled the Hell-on-earth inferno, an experience permanently and very much unwillingly burned into my memory and I'm offended by the idiocy of the flyby. That said, I only witnessed a small bit of the incendiary fall of the towers from the safety of a train; I can't begin to imagine what those who were at Ground Zero must have experienced, but the sheer terror must have been something virtually impossible to put into words. A good friend of mine was there and as a direct result of the system-shocking fear or being caught in the toxic cloud of debris or both, that friend's hair actually turned white some days following 9/11 and as a result that friend dyes their hair, and I'm willing to bet that friend is far from alone. So how did those who were there for that atrocity take yesterday's events? I can't answer that question and I'm not about to, but I know that if it were me who saw that shit yesterday I damned near may have had a heart attack. And in this age of imaging miracles being achieved through Photoshop on a minute-by-minute basis, I question the need for a live flyby in the first place. With something with wholly created or retouched via digital means, the public would have been none the wiser.

Completely fucking stupid to the Nth degree, all involved with this fiasco should be fired immediately for towering insensitivity.
Posted by Bunche (pop culture ronin) at Tuesday, April 28, 2009

I find it ironic that you want people fired for insensitivity. Heh heh...

The folks involved should be sacked for sheer stupidity... not to for mention the cost in fuel, salaries and wear-and-tear on the jets. Bad call all 'round.

Satyrblade: Bunche said "insensitivity" not me. I wish you'd have been sensitive to that.

Dude! You *sniff* hurt my feelings! How... *whimper* insensitive of you!