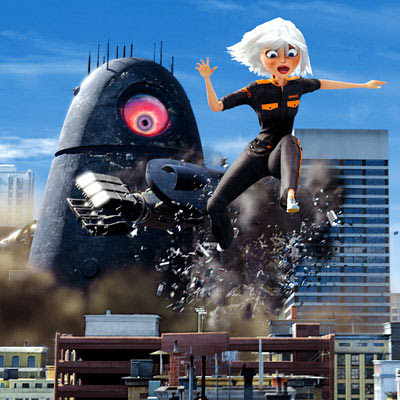 An amusing enough animated feature, MONSTERS VS ALIENS is more of a superhero movie disguised as an homage to the sci-fi/monster movies of the 1950’s than its marketing would suggest.

The story follows the heroic journey of Susan Murphy (a perfectly voice-cast Reese Witherspoon), an unassertive bride-to-be engaged to an ambitious and assholish television weatherman, who finds herself irradiated by a meteor moments before tying the knot. In front of all assembled, Susan is suffused with a green glow and her brown hair turns white as she grows to colossal proportions. In short order she finds herself kidnapped by the government and housed at a top secret facility where a motley assortment of monsters have been kept since the 1950’s. Given the idiotic code name “Ginormica” (I guess they couldn’t get away with “Vagiant” in a kids’ movie), Susan is none too pleased with her new status as a so-called monster, but soon comes to care for her fellow prisoners, each basically harmless but locked away thanks to governmental paranoia. Dr. Cockroach Ph D., a nod to the 1958 version of THE FLY (voiced by BLACKADDER alumnus Hugh Laurie), B.O.B., a sweetly brainless but sentient take on the Blob (the now-ubiquitous Seth Rogen), Insectosaurus (a fucking enormous larval beastie who fuses Godzilla and Mothra), and beach bunny-abducting Creature from the Black Lagoon lampoon the Missing Link (Will Arnett) each possess amazing abilities and it soon becomes apparent that they are monstrous in appearance only. 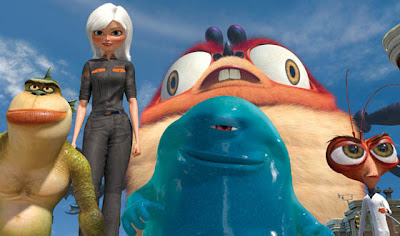 As the unlikely group of nominal prisoners form a bond, the Earth falls under siege from the planet-busting technology of Gallaxhar (Rainn Wilson), a multi-eyed, huge-craniumed and tentacled extraterrestrial despot who’s evil for no particular reason. When Gallaxhar unleashes a giant robot to retrieve the radioactive alien element that transformed Susan into Ginormica, the monsters are deployed by the government to stop the automaton’s rampage from destroying San Francisco. Unaware that she’s the robot’s target, Susan discovers her colossal capabilities the hard way as she nearly single-handedly saves the city in the film’s most spectacular sequence. Realizing he’s underestimated his opponents, Gallaxhar escalates his plans to include the destruction of the human race and re-population of the planet with clones of himself while still seeking to leech away Ginormica’s power source, thus instigating a final showdown between monsters and aliens that proves Susan and her misfit teammates to be the very definition of “weird heroes.”

MONSTERS VS ALIENS is beautifully realized and offers what may be the most outstanding 3-D effects yet seen — I felt like I’d been placed directly into the film’s environment — , but its script is a very slight trifle that relies far too much on its special effects gimmick. Susan’s journey to self-esteem and empowerment is quite engaging, but the other goings on and characters that surround her are kind of just “there,” and the audience never really connects with anything other than Susan; that’s rather a problem when she has four other teammates who each have a good deal of story potential, but little is done with them and the viewer walks away with not much more than the lesson learned from Ginormica’s story of belief in oneself and subsequent empowerment. It’s a good lesson, but it almost gets lost amidst all the 3-D sturm undt drang in a movie that feels at times like a feature-length short stretched way past its narrative limitations.

What’s saddest about MONSTERS VS ALIENS is that its 3-D is incredible and well worth the extra fee tacked onto an already exorbitant ticket price (I paid $14.50 to see it during the lower-priced matinee hours), but once shorn of its rich special effects icing, all that’s left is a butter-free pound cake. If you plan to see MONSTER VS ALIENS, make sure to experience the 3-D version before it leaves first run and ends up on DVD and cable; once it hits those venues, its flaws will become even more painfully apparent and you’ll wonder how the filmmakers could have gone to the trouble of crafting such a sure thing without taking the time to write a real script. Sure it’s kid stuff, but that’s not to say it doesn’t need a heart. 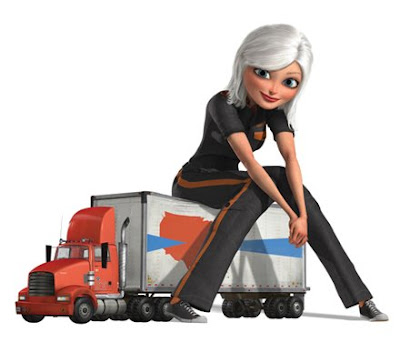 Got to see it with my 5 year old daughter and she liked it quite a bit - she was talking about it a few weeks after too - "The girl - she gets hit by a METEOR!"

i thought the first 15 minutes were really, really clunky, - I still don't understand why he had to skip Paris for Fresno when he was still in Modesto three weeks later, and what was with the old lady and the thumbs? She'd never seen her mother in law before the wedding? But the second act picked up quite a bit, and the 3-D was the best 3-D I'd ever seen - Sony had a 3-D trailer in there and you could see all the levels, it was like a die-cut, foil-cover come to life. Monsters and Aliens' 3-D was flawless, perfectly rounded objects in space, great job.