As I continue catching up on my regular comics reading following finishing THE COMPLETE TERRY AND THE PIRATES, here are some more reviews: 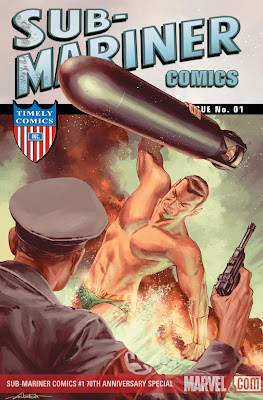 So it's Marvel's seventieth anniversary and they quite appropriately decided to put out the first good Sub-Mariner comic since SUB-MARINER: REVOLUTION (the less said about that piece of shit SUB-MARINER: THE DEPTHS, the better). Harking back to Prince Namor's early days, namely the time just before America entered WWII, this special gives us three fun tales from the Avenging Son's youth, two of which are new and detail the moments when Namor focused his blanket hatred of humanity to a tight focus on the Axis powers. The first story is written by professional Golden Age booster Roy Thomas and details a disastrous Nazi attempt at recruiting Namor into the service of Der Vaterland; arrogant bigot though he may be, Namor takes considerable offense at the Nazi theory that they are superior to "lower" groups like blacks and Jews and are therefore justified in whatever heinous behavior they choose to commit, and sinks a U-boat full of the Sieg-Heiling vermin, including a beautiful Hitler-dispatched agent whose unterhosen drenches at the thought of taking a ride on the prince's torpedo. The second story, "Vergeltungswaffe!," is written by Mark (XENOZOIC TALES) Schultz and drawn by living legend Al Williamson and relates another tale of Namor's early strikes against the Third Reich, this time rescuing an American aviatrix while taking out a missile testing facility on a remote island. The last story is another reprinting of the 1939 version of the Sub-Mariner's origin as concocted by his creator, the late Bill Everett, and it's a great bit of fun that establishes the character as an anti-hero from the get-go. This special is a solid bit of fun, and if you ask me that's what comics are all about. 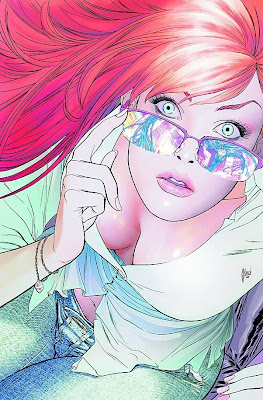 Gratuitous (though well-drawn!) cleavage cover notwithstanding, the adventures of the post-BIRDS OF PREY Barbara Gordon continue as her search for Cheese Fiend's murderer brings her to a cadre of top-flight computer hackers in Hong Kong. Good stuff, but I suggest waiting for the inevitable collected edition; this kind of thing simply reads better in the long form. 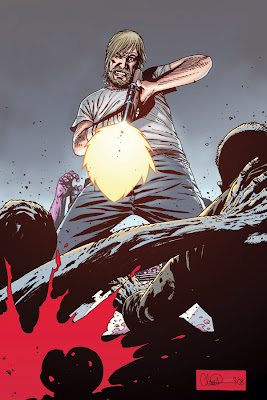 The world's bleakest comic magazine brings yet more gore, violence and zombie misery. This time the ragtag band of survivors must flee what would have been a perfect haven in which to settle down, thanks to the all-too-close threat of a two-thousand strong herd of flesh-eating undead, a retreat that doesn't go down too well and sows further resentment against former-cop Rick... It's good stuff, but I'm starting to lean toward waiting for this to come out in collections instead of buying it month to month. THE WALKING DEAD in individual chapters is a criminally-fast read and it's over before you know it, so a solid book's-worth is probably the way to go. 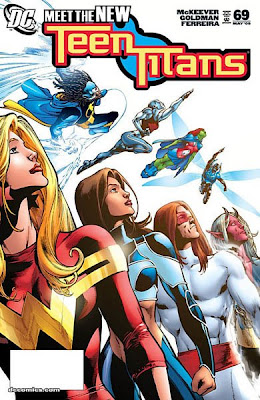 I swear to Zoad, if I have to read the cover blurb "Meet the New Teen Titans" one more goddamned time... Frankly, I've found much of what's gone on with the Teen Titans since the Wolfman/Perez days to be unworthy of much attention, but since the two latest issues were in my stack I figured, "Why the hell not?" Picking up right where the TERROR TITANS mini-series left off (apparently another entry into the "superheroes press-ganged into unwilling gladiatorial combat" genre, which I did not read), we once again get a shaking-up of the team's lineup and since I find few of the post-original Teen Titans interesting in the least, I really didn't care who stayed or left. I despise the new Blue Beetle (I wasn't much of a fan of his previous versions either, if truth be told), can't stand the so-called Wonder Girl (her mere existence in the same world as Donna Troy offends me), and find the new Aquagirl and dykey hardcase Bombshell to be a couple of non-entities, but I do like Miss Martian (filling the teams "sunny innocent" role vacated by Starfire) and am kind of intrigued to see what will be done with Static and the Vertigo-ized version of Kid Eternity, so this issue's as good a place as any to jump on and see if anything of interest happens. It's well-written enough and the art's quite nice, so that helps considerably. And don't think I forgot to mention the now-powerless Kid Demon; he sucks, but let's see how he gets along with nothing but his pitiful original costume and an energy-spewing trident. 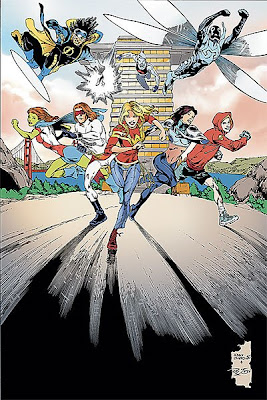 This is what, the eleventy-seventh first Teen Titans annual? Whatever the case, this picks up right after TEEN TITANS #69 and is the prelude to "Deathtrap," a five-part crossover that I may or not bother with since I'm indifferent to the Titans and loathe crossover stories. All you need to know about this issue is that Titans Towers goes lethal Danger Room on its inhabitants and all hell breaks loose, To Be Continued in TITANS #12 (the book featuring the former-Teen Titans whom I cared about during the Wolfman/Perez days). The art's nice, but the narrative kickoff has me only slightly interested in what happens next. 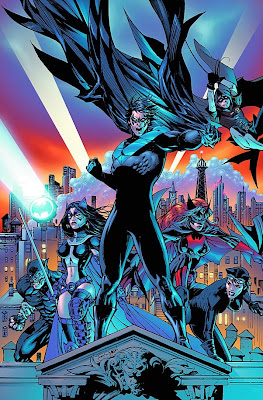 Considering the totally contradictory fates of the caped Crusader found in the Grant Morrison-penned "R.I.P. Batman" and FINAL CRISIS story arcs, I'm amazed at how entertaining I found this followup. With the Batman presumed dead (yeah, right!), Gotham City pretty much becomes a demilitarized zone as criminals of all stripes come out of the woodwork and go totally fucking apeshit. The entirety of the Batman Family, led by Nightwing, do their best to keep things in check, but as shit begins to get too thick it becomes apparent that somebody has to assume the mantle of the Batman so the Gotham underworld will once more have something tangible to fear. But who's gonna step up? What does the Black Mask have planned when he demolishes Arkham Asylum after turning loose its notoriously-dangerous inmates? And who is the guns-a-blazin' homicidal maniac who claims to be the new Batman? 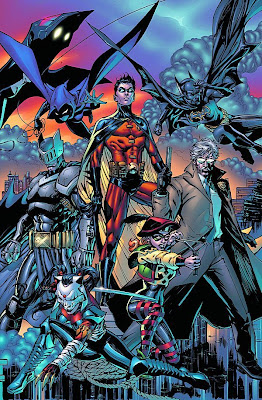 The identity of the homicidal "Batman" is revealed (anyone who's read Batman comics since 1985 will have figured that one out), the Black Mask ups the ante, a war is orchestrated between the Penguin and Two-Face (my money's on Cobblepot). and Tim Drake dons the old school Batman costume, only to meet with a very nasty turn of events. If this is how good the Batman books can be without their starring character, I think it says a lot about the current state of the Dark Knight's comics and I say leave his ass allegedly blown up or stuck in Anthro's prehistoric world or whatever for the foreseeable future. At fist I thought a Bruce Wayne-less Gotham would be even less worth reading than it had been for years, but I'm very glad to be proven wrong.
Posted by Bunche (pop culture ronin) at Wednesday, April 22, 2009

So why is the Sub-Mariner throwing a huge cock at a Nazi?

Or, "I got your Schutzstaffel right HERE, muthafucka!"