A VAULT RERUN: IN REMEMBRANCE OF WENDY O WILLIAMS

Note: my old buddy Stinky Weasel — the guy single-handedly responsible for turning me on to quality heavy metal during my long-ago freshman year of college — reminded me that April 6th was the eleventh anniversary of the self-inflicted death of Wendy O Williams, the most badassed rocker woman who ever lived, and in honor of her memory I'm dusting off this heartfelt piece written during my days at the barbecue joint. If you knew her, please observe a moment of silence. If you have no idea who she was, please read this and hopefully you'll be inspired to check out what she left as her legacy. 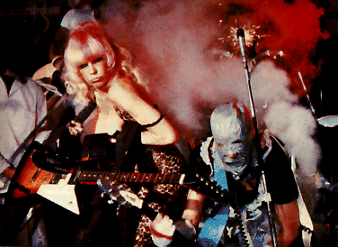 -"Doom Song" by the Plasmatics

I went in to work at the barbecue joint very early last Sunday, arriving just before 9AM to prepare fresh racks of ribs for a wedding party that had rented the place out for the tail end of the afternoon and the early portion of the evening, four hours in total. Not fun for me since by virtue of the job I have become more or less nocturnal (but was a night person by nature anyway), but somebody has to do it, so I hauled my beige ass through the door in a semi-somnambulent state (I went to bed as early as possible, but I couldn’t sleep, and stopped trying to at around 7:30AM). I don’t drink coffee, so caffeine wasn’t going to help, but I could always rely on my tried and true drowsiness cure: very loud music. And since the place is very well soundproofed I could rock out with my cock out (metaphorically of course, because otherwise there would be health code violations to deal with).

But what to choose? I have a small library at the ready in the kitchen, initially dragged in to wage a self-defense war against the mostly torturous tastes of one of our bartenders (you know who you are, Joy!), and as I perused my choices, I caught sight of the Plasmatics’ “New Hope For the Wretched,” a classic punk/metal hybrid that I’ve adored for some twenty-six years. Featuring staggeringly idiotic lyrics, balls-out guitar masturbation, and a beat that combines a beehive-like buzz with a poppy bounce, I find it irresistible as an enjoyable alarm clock. But what sends the album into rock ‘n’ roll bedlam Nirvana is the unique vocal stylings of the ultimate hardassed frontwoman, Wendy Orlean Williams, or Wendy O to those of us who loved her. Immediately getting a warm feeling at the mere thought of the record, I put the disc in the stereo and hit “play.”

In no time I felt my vitality surging back to life and I bopped about the kitchen, merrily seasoning ribs, cutting up pork, and loading the two smokers while singing along with “Tight Black Pants,” “Monkey Suit,” and many others before settling on one of the greatest songs of all time, namely “Doom Song,” an Invocation of protection from and curse upon hypocrites and oppressors, accented with a “Toccotta and Fugue in D Minor”-style pipe organ. Upon the CD reaching that track I reset the stereo to repeat play mode, listening to “Doom Song” over and over until my boss showed up, at which point I opted for conversation. Once the chit-chat was over, I began to think back on the Plasmatics and how they would have most likely been swiftly forgotten had it not been for the presence of Wendy O Williams, a performer who would do just about anything onstage to entertain her audience.

I first heard of the Plasmatics in 1980 when they appeared on New York City's tepid afternoon talk show "Live at Five" and the visual of a scowling Wendy O, foot-high Mohawk proudly defying the staid sensibilities the usually boring chat show, being interviewed by NYC news mainstay Sue Simmons shocked my young mind. Williams was by no means attractive or pretty in the way that most female rockers had been before her, but she displayed a cold, clinical intelligence that Simmons did not expect her to possess, especially since Wendy O's infamous stage antics included her blowing up Cadillacs with dynamite, chainsawing brand new guitars in half, demolishing television sets with a sledgehammer, regularly going topless save for black electrical tape on her ninnies, and getting totally nekkid and covering herself with shaving cream, a fashion statement that inevitably melted and landed her in the hoosegow on more than one occasion. 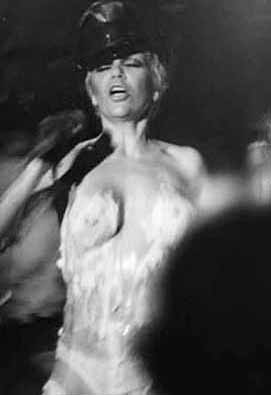 Needless to say, such a crazed spirit greatly appealed to my adolescent misfit nature, so I went out the very next day and bought "New Hope For the Wretched" on vinyl, thereby ensuring my lifelong loyalty to hard rock chaos and occasional cacophony.

Over the years I saw many a Plasmatics video and even attended a Wendy O show when she went solo (as one of the headliners of a legendary all night show at the old Ritz in 1986 that featured Stormtroopers of Death, the Cro-Mags, Wendy O Williams, and Motorhead; when the show let out at 7AM I was drunk as hell, and even though I was smack dab in the middle of Manhattan's Lower East Side I could not hear a goddamned thing) and while I did not care for her post-Plasmatics output, I still enjoyed her persona.

Wendy O simultaneously flew in the face of and gloried in the hypersexuality of the woman rock star, her severe features and balls-out (or ovaries-out, if you prefer) ferocious attitude serving as a bizarre counterpoint to her sexy, athletic body that was on display as often as she could get away with it. Prowling about the stage like a werewolf in heat, howling with a growl or moan rather than anything resembling an actual singing voice, Williams' aspect was reminiscent of an utterly fearless, post-apocalyptic super-hero from a hellish, irradiated wasteland like that roamed by the painted and befeathered post-apocalyptic savage biker tribes seen in THE ROAD WARRIOR.

A tougher, scarier antithesis to the cock-rockers of the day, Williams was a fiercely defiant she-demon who not only knew she had a pussy, but knew how to use it (don't get me started on her skills involving her naughty bits and a bunch of ping pong balls), and if she wanted to mate, you’d damned well better be ready for it. Preaching physical carnage and destruction as catharsis, supplemented by a firm belief in going through one's existence with absolutely zero bullshit from oneself or those who sought to fuck over the individual spirit, Wendy O was a rock ‘n’ roll shaman. This metal priestess was a woman warrior bellowing her power at an audience of men too weak to even comprehend just what is assailing them, or exactly what it was they liked about being on the receiving end of such forceful aggression.

Then in 1998, Williams died in the woods near her home in Storrs, Connecticut of a self-inflicted gunshot wound at age 48. The reasons for her suicide remain obscure, though there are those who posit that she took her own life rather than compromise her art, while some of her intimates claim that she was "despondent" as she neared the end. Perhaps all that need be said can be found in this excerpt from her suicide note:

"I don't believe that people should take their own lives without deep and thoughtful reflection over a considerable period of time. I do believe strongly, however, that the right to do so is one of the most fundamental rights that anyone in a free society should have. For me much of the world makes no sense, but my feelings about what I am doing ring loud and clear to an inner ear and a place where there is no self, only calm."

I like to think that Wendy O's unquenchable spirit is dominating some inhospitable corner of the underworld, scaring the unholy shit out of whatever demonic forces there may be and showing them a thing or two about how to kick ass. But I also ponder who will step forth to take her place as the Number One, take-no-prisoners female voice in rock; after first hearing the Lunachicks' "Jerk of All Trades" album I though that distinction might go to their frontwoman, Theo Kogan (now heading Theo and the Skyscrapers), but she has mellowed considerably and her aural approach is far more cerebral (and even poetic) than Wendy O's (bear witness to "Mr. Lady" to see what I mean), so for the moment we faithful must be patient. 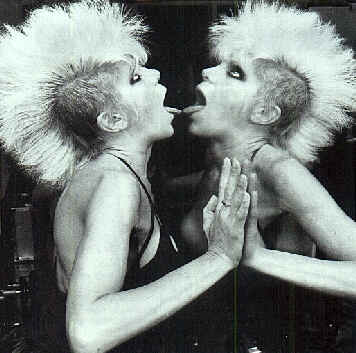 I discovered The Plasmatics at around the same time period (by way of a puzzled Tom Snyder and a car blow to hell on his soundstage), and they have always epitomized everything I loved about the Punk Rawk spirit.

Saw Wendy during her solo carer, too, although the gig was not as glorious as the one you describe. It DID feature Seattle's pre-Grunge grinders Coffin Break and the second-to-last appearance of pre-Gwar Death Piggy, though, so it was by no means a boring show. I was depressed for weeks after WOW's suicide, especialy considering that Christian Death founder Rozz Williams had also offed himself only days earlier. That was a very bad week for great bad music!

Oh, for current clits-out lunacy and attitude, my recommendations would be either Tarrie B from My Ruin and Manhole, Katie Jane Garside from Daisy Chainsaw and Queenadreena, or a mad fusion of both.