EVERY DAY'S BETTER WITH UNEXPECTED FIST OF THE NORTH STAR STUFF! 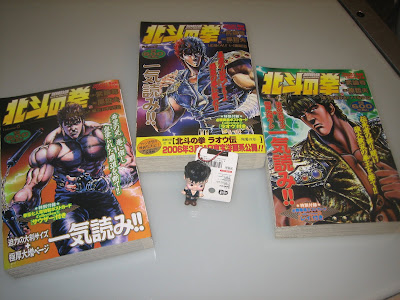 An assortment of FIST OF THE NORTH STAR swag, all for under twenty bucks!

It's Wednesday, that magical day of the week when the new comic books come out, so during lunch I headed over to Jim Hanley's Universe on 33rd Street to slake my geekish thirst, and while making my way over there I passed a Japanese book store notorious for its inexpensive prices on import items. Just for the hell of it I went in and asked the helpful saleslady if the hardcover editions of the untranslated and still in B&W HOKUTO NO KEN — aka FIST OF THE NORTH STAR — were still in print, and she whisked me upstairs to the place's copious manga section. Current volumes of the classic post-apocalyptic martial arts/superhero epic were located in no time, in four editions to choose from, but alas no hardbound copies. But the nice thing about what did happen to be available was that some of the recent versions were in a somewhat larger format than I'd ever seen (I picked up my full set back in the 1980's and those volumes were the standard digest-sized tankōbon format), thick as phonebooks and dirt cheap at five bucks a pop for over four-hundred pages of material. Although I already had the complete series, I couldn't resist picking up a few volumes so I could have the art at a bigger, more enjoyable size, and among the ones available were the ones containing some of my favorite sequences from the strip's five-year run. When I hit England in a few days, I plan on giving one of those favorite sequences to Chris (THE TWELVE) Weston so I can see what he makes of artist Tetsuo Hara's Neal Adams-influenced work. Should prove interesting...

When I hit the checkout counter I was served by a very cute and sunny salesgirl whose name tag identified her as Tomoe (pronounced "Toe-Mo-Eh"), and when she saw what my books were she laughed and said (in a thick accent), "You like-a Kenshiro? He look-a so coo-rayzee when he-a scuh-reem-uh!" I couldn't help but return her laughter and agree, and as I whipped out my cash I decided to add one more item to my purchases, namely this utterly horrible but so-awful-it's-great key fob of ultra-violent badass Kenshiro rendered as a nauseatingly-cute Cupie Doll: 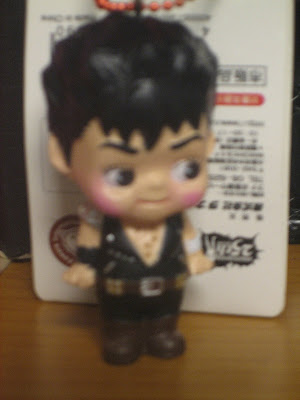 The latest in my ever-growing collection of FIST OF THE NORTH STAR crap, but easily the most bizarre!
Posted by Bunche (pop culture ronin) at Wednesday, April 29, 2009