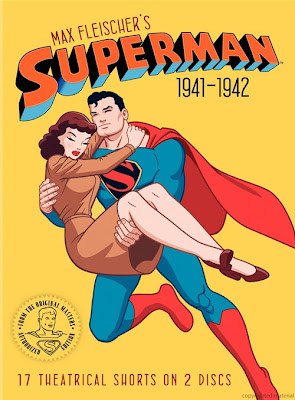 I haven't seen the Max Fleischer Superman cartoons from the 1940's in quite a while, but I was reminded of their excellence (well, most of them) when I stumbled across and ad for the set being released yet again on DVD, this time with some supposedly kickass digital remastering. I just ordered them and when they show up it will be the first time I've owned the series of seventeen theatrical shorts, although I have seen all of them.

The cartoons are a hell of a lot of fun and the first nine are justly considered among the finest work from American animation's golden age, easily rivaling Disney's and Warner Brothers' output in terms of sheer quality. It much have been a real jolt to see the barely-three-year-old Man of Steel explode into action in glorious color on the nation's motion picture screens, and thanks to the special effects technology of that era the only way to make Superman work on film was in animation. The first nine in the series are genuinely spectacular and my favorites of that bunch are the first one, simply entitled "Superman," and "The Mechanical Monsters" (both from 1941), along with "The Arctic Giant" (1942), in which Superman takes on an unfrozen dinosaur as it rampages through the city in a fashion that would later become familiar thanks to THE BEAST FROM 20,000 FATHOMS (1953) and the entire Godzilla series. Hell, it's all good, and how can you not love such an early piece of Superman lore that gives us this genuinely creepy visual for his use of X-ray vision?

That's one of the few times where I ever think of Superman as an alien, and I love it. I can't wait to see these cartoons again and pass them on to my niece, Cleo.
Posted by Bunche (pop culture ronin) at Thursday, April 09, 2009

Agreed. They're still amazing. I show Mechanical Monsters in my Language of Film & Animation class and it evokes delight even from those jaded kids.