SOME RECOMMENDED READING FOR SUPERMAN FANS 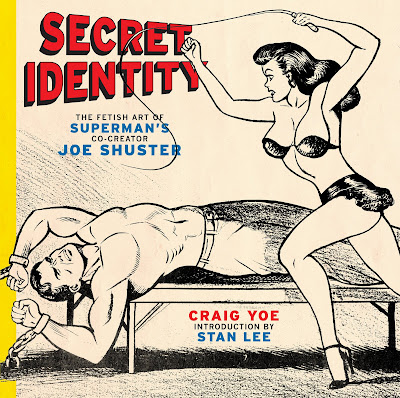 About two weeks ago I interviewed comics historian and all-around swell guy Craig Yoe about his latest bit of comics-related archaeology — when the interview goes up over at PUBLISHERS WEEKLY COMICS WEEK I'll let you know — and I have to tell you it's one hell of a read. SECRET IDENTITY: THE FETISH ART OF SUPERMAN'S CO-CREATOR JOE SHUSTER (from Abrams Comicarts) not only gives us a fascinating look at the artist's illegal, pornographic output following his and co-Superman creator Jerry Seigel's lawsuit against National, aka DC Comics (after which they were effectively persona non grata at the company), but also provides an unexpected element in the founding of the Comics Code Authority.

Following the disappointing (to say the very least) results of the lawsuit, Shuster found work illustrating NIGHTS OF HORROR, a multi-volume series of S&M pulp booklets that featured visuals depicting all manner of flagellation, torture with hot irons, topless and naked females subjected to assorted degradations and discipline and other such fun ways to pass a boring weekend, all delivered in a style I can't believe no one ever connected with the guy who first drew the Man of Steel. Other than its kinky content, the stuff looked exactly like what could be seen in the pages of any given issue of ACTION COMICS, particularly characters who bore a marked resemblance to Lois Lane, Lex Luthor, Jimmy Olsen — looking hilariously jaded, with a ciggie hanging from his lips and a nubile blonde within reach — and even Superman himself, so how this escaped notice is beyond me. Perhaps because much of it is technically superior to the work seen on Superman?

The NIGHTS OF HORROR books were definitely not comics but they were among the bad influences cited by Dr. Frederic Wertham when he appeared before the Senate Subcomittee Hearing on Juvenile Delinquency in 1954, held up as shocking material that found its way into the hands of a bunch of Hitler-worshipping Jewish Kids who dubbed themselves "the Brooklyn Thrill Killers" and unfortunately lived up to their name. Too bad Wertham neglected to mention that the NIGHTS OF HORROR booklets weren't comics, but why let a little thing like an omission of facts stand in the way of one's political agenda?

I could explain in more detail but I'd rather you discovered the eye-opening story for yourself by checking out Yoe's excellent book. And if you live in the NYC area, Craig will be at JIM HANLEY'S UNIVERSE — my vote for the city's most customer-friendly comics shop — on Friday night from 5PM through 8PM, signing his book and talking about it with the cognoscenti (click on the invite below to see the details at a larger size). 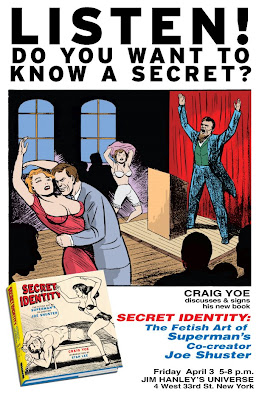 There's also a book launch — or "raunch" — party for SECRET IDENTITY this coming Sunday night, so I hope to see all of you there! (Click on the invitation below for the skinny.) 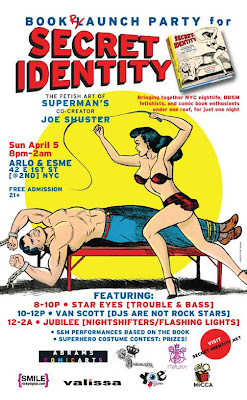 And, no, this is most definitely not an April Fools' Day gag!
Posted by Bunche (pop culture ronin) at Wednesday, April 01, 2009