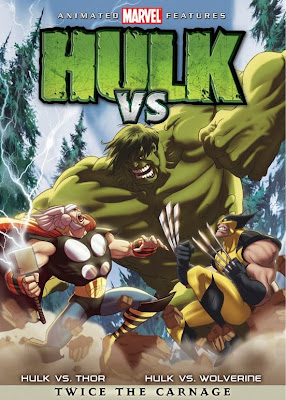 Are you a Marvel Comics fan who's completely fucking sick of seeing an endless deluge of shitty versions of your favorite heroes cranked out by uninspired animation houses, a situation that has worsened considerably thanks to straight-to-DVD productions? I know I am, so imagine how pleasantly surprised I was to discover that this DVD is both very entertaining and quite faithful to the spirit of the source material, as well as being the most balls-out violent Marvel cartoon release to date. (Hey, it's stories featuring the Hulk — in unbridled and extremely angry "Hulk smash!!!" mode — , Wolverine and the Mighty Thor, so what else could one hope for or expect?) There are two stories, both around just under forty minutes, and while the Hulk gets top billing he's really only there to be the implacable force of nature that he is, serving to provide a living torrent of disaster and destruction for the opposing heroes to deal with and hopefully survive. 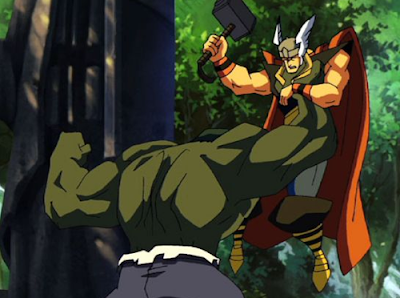 Ever wanted to see the Mighty Thor get his blonde ass thoroughly kicked in no uncertain terms? Well, here's the DVD for you!

HULK VS. THOR involves the annual "Odin Sleep," a brief period in which the chief of the Norse gods falls into a deep torpor to allow his vast powers to recharge, and during that time all of Asgard's foes gang up and attempt to conquer or destroy the Realm Eternal. For however long the gods of Asgard have existed this annual set-to takes place, forever won in hard-fought battle by our heroes, but this time around the evil Loki, Thor's adopted brother and god of mischief, has sussed out a way to use the situation to his advantage and give his hated brother a serious kicking in the process: while Odin is pretty much comatose during his recharge and thus unable to interfere, Loki magically summons Bruce Banner (the Hulk's tortured alter ego) to Asgard and, with the help of Amora — better known to comics geeks at large as the Enchantress — , separates Banner from his monstrous other half and gains control of the Hulk in order to send him on a mission of outright devastation. As the Hulk makes a beeline toward Odin, Loki knows it's only a matter of time until Thor shows up to protect the slumbering All-Father, and when Thor finally arrives he receives a beatdown worthy of a Thunder God. It's brutal, but before it all turns into a mere slugfest the story takes a major turn when Loki discovers the hard way that the Hulk cannot be controlled by man or god, and thanks to that error in judgment Loki and Thor must join forces and journey to the Norse underworld and attempt to bargain with Hela, the goddess of the dead (and Loki's daughter), before Asgard is completely razed by the Hulk. 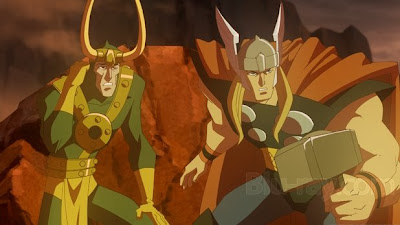 Loki and Thor in Hel, the Norse underworld.
Nearly every familiar face from the pages of Thor is on hand, including the Warriors Three, Balder the Brave, Lady Sif, and even the Valkyrie, and each is handled well, especially Hela, a character I never expected to see in animated form thanks to her Jack Kirby design being a bitch to animate. 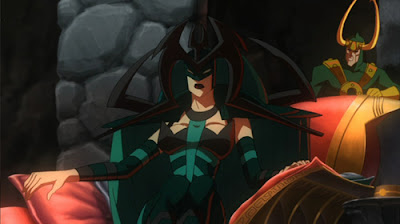 Hela, animated at last!
As a lifelong Thor booster I was very happy with this mini-feature, easily the best use of the Thunder God and his supporting cast yet committed to animation and by far the more plot-driven of the stories on this DVD, and it gives me much confidence that the upcoming animated feature TALES OF ASGARD will be every bit as good as this. In fact, by the look and sound of it in the preview found in the DVD's special features I'd say TALES OF ASGARD will probably surpass HULK VS. THOR by a longshot. 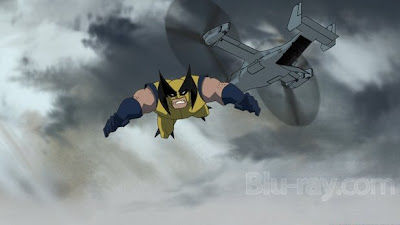 Wolverine, proving that parachutes are for pussies.

My own deeply-held love for Thor aside, the real draw for the vast majority of potential buyers of this DVD is HULK VS. WOLVERINE, and I promise anyone willing to sit through it that you will in no way be disappointed.

X-Men mainstay Wolverine, one of the most popular of Marvel's post-"Marvel Age" (1961-1970) heroes and just plain one of the company's most popular creations period, got off to an inauspicious start in an issue of THE INCREDIBLE HULK, so it's kind of appropriate to use that classic encounter as a launching point for this mini-feature. While not adapting that particular story but retaining its snowbound Canadian setting (and unfortunately leaving out the man-eating Wendigo), HULK VS. WOLVERINE has little on its mind other than providing fans with the most badassed, knock-down, drag-out ass-kicking festival that it can bring, and the film succeeds at its task with flying colors.

When the Hulk goes on a seemingly-random rampage in Canada that devastates an entire town and leaves dozens of casualties in its wake, the Canadian government calls in Wolverine to handle the situation. Dropped deep in the woods, Wolverine soon encounters Bruce Banner, pisses him off and, Presto! there's the Hulk, bigger than big, stronger than strong, and meaner than Hell. 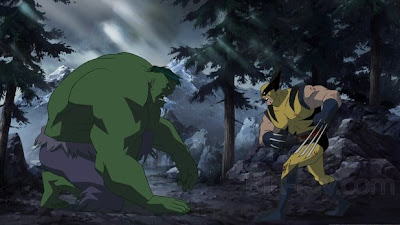 When the Hulk clashes with Wolverine, major-league ass-whuppin' is imminent.

Now let's look at this rationally, within the context of what is known about the characters in question. The Hulk is a gargantuan, nigh-unstoppable monster whose strength only increases with his level of excitement or anger, essentially making him the most powerful mortal on the planet. Plus he heals at an incredible rate, making him damned-near unkillable. Therefore pitting a relative pipsqueak like Wolverine against him serves about as much purpose as a football bat and, healing factor and Adamantium-reinforced skeleton or not, there is simply no fucking way Wolverine could hope to withstand or even survive a set-to with an enraged Hulk. Sure, Wolverine's one of the toughest sunsabitches out there, what with the claws, genuine love of combat and a mutant system that retards fatigue poisons, but I never bought him being able to go toe-to-toe with the Big Green, not even after years of development in the ranks of the X-Men and fighting the likes of the Imperial Guard. So when the throwdown against Green Genes ignites it's only a matter of time before Wolverine unceremoniously gets a size 73 bare green foot shoved straight up his poop chute, and next to what occurs in the animated film of SUPERMAN/DOOMSDAY, the mutual kicking of ass found here may be the most brutal I've seen in an American-produced cartoon. In fact it's so damned brutal and violent that I was very surprised and shocked by its content; we get the Hulk nearly run through by Wolverine's claws (said damage being accompanied by blood, unlike in the comics and previous cartoons), bloody altercations with Lady Deathstrike, Omega Red, Sabretooth and even Deadpool (whose literal disarming by Wolverine looked like a display in my local Italian butcher shop's window), and the mother of all "Hulk smash!!!" beatdowns when the Hulk pins Wolverine to the ground and pummels him and pummels him and pummels him and pummels him, over and over and over, with each blow being powerful enough to take down an entire building. That bit got so intense that I actually found myself saying aloud "Please stop hitting him!" several times.

Also of note is the squeezing in of elements from the Barry Windsor-Smith-drawn WEAPON X origin story, a sequence about a hundred times more interesting than that bullshit Marvel came up with in WOLVERINE: ORIGIN some years back. The ending leaves itself wide open for a sequel, but if you're looking for unadulterated action, you've found the right DVD. TRUST YER BUNCHE and add this bad boy to your NetFlix queue immediately, but keep in mind that it's waaaaaaay more violent than expected and, depending on your own individual parenting views and the sensitivity of your little ones, you may want to preview it before you let your kids check it out.
Posted by Bunche (pop culture ronin) at Sunday, April 05, 2009

Yeah I got this one too. It is as you say the best Marvel animation ever.

I really loved this too! Especially the animated version of my favorite Marvel villain Hela. Kirby's costume for her was a career highpoint. For someone who never went to fashion school, his wardrobes for his various uber-races were incredibly of-a-piece with each other.

The body count in both stories really surprised me. The commentary track narration makes it pretty clear that Hulk has actually killed all his opponents in the Wolverine story. Not cartoon dead or just knocked them out or whatever. They're dead. He would have done the same to the Asgardians too if they weren't gods. I was really surprised Marvel allowed them to kill off so many characters.