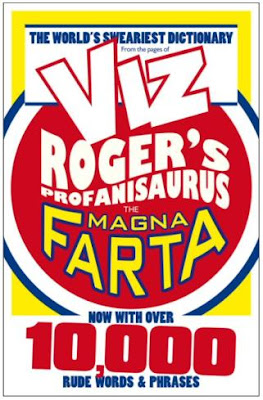 The most indispensable book in all of Western culture.

I just picked up the latest issue of the monthly British humor magazine VIZ and immediately went straight to the Profanisaurus section, one of the two regular features I buy the pricey ($9.50 per issue!) import periodical for (the other being the hilariously violent THE BACONS, a comic strip about an incredibly loutish family). The Profanisaurus is a popular monthly column that the magazine's editors and its readers profusely contribute to, loading it with cuss words, filthy euphemisms and innumerable usages of the English language that you would never have thought of in a million years and that are totally unsuitable for use in polite, erudite conversation. It's fucking hilarious and a joy to read, and the amount of new material received on a monthly basis only adds content to the annually updated collected edition, the latest version of which is THE MAGNA FARTA , a literal doorstop of vileness that features "over 10,000 rude words and phrases." Seriously, can you live for even another minute without acquiring such a worthy tome? It's simply irresistible to those of us with who happen to be wordsmiths with juvenile senses of humor, and even the layman will find it quite enlightening.

As for today's Profanisaurus column readings, the following entries delighted me utterly:
Elanor Rigby's funeral euph. A mutually unsatisfying sexual encounter, ie. One at which, in the words of the famous Beatles song, "nobody came."

Over Niagra in a barrel phr. The situation which occurs when flushing a blocked toilet, for example in a train lavatory, causing the water level to rise up to the rim, thus causing any floating Thoras to risk a death-defying plunge over the edge.
Posted by Bunche (pop culture ronin) at Thursday, April 09, 2009

I think one of my mates bought the leather-bound edition for his library - or says he has/will.

The thing I (also) like about Viz is how shops blithely put it with all the comics and kids magazines section.. That always makes me chuckle when I'm at the newsagent.

I love me some Fat Slags.