REASON #372 WHY DOLLY PARTON IS AWESOME 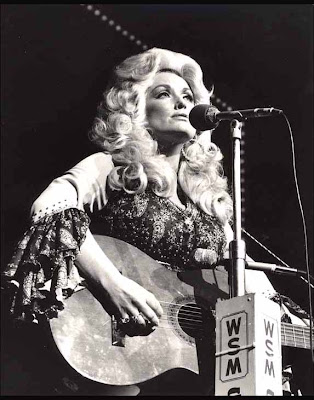 Somehow managing to ignore the redoubtable Miss Parton's most in-your-face assets for the moment, I'd like to bring up a bit of classic Dolly excellence that exemplifies one of my two favorite aspects of real Country/Western music (as opposed to much of what comes out today, namely soulless crap performed by people whose most awful experiences amounted to a bad day behind the counter at Kinko's). Country/Western always struck me as white people's version of the blues, marked by that genre's amazing ability to range between two extremes of the human experience, namely the humorous and the incredibly depressing. At times country goes so overboard with its descents into clichéd misery that it can come off like unintentional self-parody, and when those tropes are addressed in earnest they can become quite hilarious, as is the case with David Allan Coe's totally straight-faced "You Never Even Called Me By My Name" — humorously intended to be the perfect country song thanks to its inclusion of damned near every country song subject imaginable, including getting drunk, failed romance, "momma," standing in the rain, Jesus and Judgment Day, prison, trains, and death — but when the genre gets dark it could teach death metal a thing or two about being disturbing. Case in point: Dolly Parton's 1969 "Evening Shade," a song whose title I had forgotten for years but just remembered about a half hour before sitting down to write this. 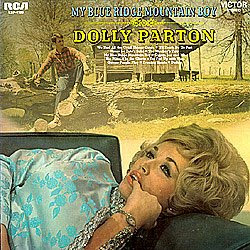 1969's "My Blue Ridge Mountain Boy" album: here lurks some surprisingly dark stuff, and I think it's telling that it's not available on CD.

Hailing from her third solo album, 1969's "My Blue Ridge Mountain Boy" (the title track of which is from the point of view of a bored girl who leaves her sleepy hometown for the excitement of New Orleans, only to end up as a prostitute), "Evening Shade" kicked my ass when I first heard it right around the time the innocuous and annoying "9 To 5" movie theme song was a monster hit, and I simply could not believe such a pitch-black dark number could have been created by the same merry Top 40 songstress. Parton's delivery of the tune's words is as matter-of-fact as a police blotter report or a statement given to investigating police officers after the event took place, and I buy every word of what the character has to say. Once I heard it I checked out a lot of Parton's early works, and from that exploration was born my undying respect for the woman and her work. Anyway, here are the lyrics to "Evening Shade," and I say you'd be hard-pressed to find a more disturbing song in its entire musical genre. It certainly isn't anywhere near the same galaxy as "9 To 5," but then again if a tune like Kenny Rogers' "Coward of the County" can be an immense crossover hit and be perhaps the only hugely-popular Top 40 song to feature a gang-rape, I guess anything is possible.

I agree - there's a lot more depth to Dolly Parton than shnow in songs like "9 to 5". She's a savvy business woman, so the mainstream stuff pays the bills... Brains, talent, and that brassy sexiness. Pretty cool for a white chick.