KICKING BISHOP BRENNAN UP THE ARSE 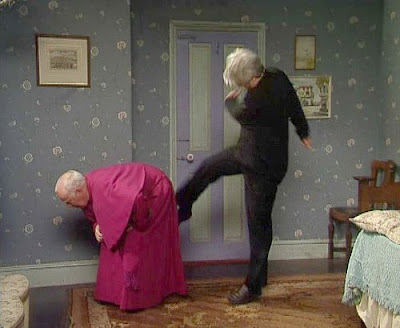 It's Sunday morning and I can hardly imagine a more worthy thing to post about on the most sacred day of the week.

Heeding the sound advice of Declan Shalvey, I'm making my way through the Irish sitcom FATHER TED (1995-1998) and am at the moment recovering after nearly pissing myself with laughter over the episode "Kicking Bishop Brennan Up the Arse" (yes, that's really the title). The whole series of FATHER TED is pretty damned funny, but this episode showcases everything that makes for classic comedy: a great script, class acting by the entire cast, and some sequences of simply unforgettable lunacy. Several preceding episodes made me a fan, especially the one about Father Ted offending the local Chinese community and his disastrous attempt at making amends with a ludicrous "ethnic diversity" celebration, but this one cements my love for the series, so I urge you to add FATHER TED to your Netflix queue. Do it now, ye feckin' eejit!!!
Posted by Bunche (pop culture ronin) at Sunday, April 19, 2009

HA! Great episode...on eof my favorites. I was living in Ireland at the time thses aired on Channel 4 and Father Ted is still hilarious today as the first time I saw them.

One of my all time favorite shows. Lover the Eurosong episode with the 'My Lovely Horse' video. It you think that's funny...you should check out some REAL Eurovision song entries...as tacky as hell and make Father Teds video seem like state of the art.

It's info on Tedfest that they hold every year.