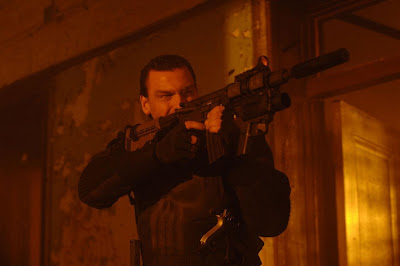 Frank Castle (Ray Stevenson), aka The Punisher: blasting the motherfucking shit out of criminal scumbags and letting God sort 'em out.

After two previous attempts that sucked a dead bum's asshole, The Punisher finally gets a movie that's just as ultra-violent and completely over-the-top as his most extreme comic book adventures. This one's definitely brainless and I know that several of my former colleagues consider this a piece of shit, but my buddy Chris and I loved it and cracked up from start to finish. Chris summed it up quite concisely when he described PUNISHER: WAR ZONE as a perfect contemporary exploitation movie that would have had a long life on the big screen if the grindhouse circuit hadn't more or less died out; I'd say his assessment is not far off, but I don't give it perfect marks because it lacks the one major element of the great exploitation opuses, namely gratuitous nudity. There are no titties-a-bouncin' in this one, but I'm happy to overlook that when a movie entertains me this much.

This time around somebody actually bothered to read some Punisher comics and by the look of what turns up on screen I'd say much of the film owes a serious debt to what Garth Ennis wrote during his lengthy run on the series, although it betrays a knowing sense of levity absent from Garth's serious-as-a-heart-attack narratives. The Punisher himself is no longer a pretty boy a la Dolph Lundgren or Thomas Jane, but is instead essayed by Irish actor Ray Stevenson, who looks the right age for the part, has an imposing physical presence (unlike Thomas Jane) and exudes the hardness that the character has been portrayed as possessing in the comics for the past twenty years or so. This Punisher is a total killing machine, a one-man army who's gotten his Terninator on and takes it straight to the heart of organized crime, emotionlessly and thoroughly exterminating criminals like the vermin they are. It's during one such confrontation that the Punisher wipes out pretty much an entire New York Mafia family in a spectacular festival of carnage that opens the film, but one of the wiseguys he kills turns out to be an undercover FBI man and that kill violates The Punisher's inviolate rule against harming cops or soldiers. Wracked with guilt, The Punisher presents the FBI man's widow (Julie Benz of BUFFY THE VAMPIRE SLAYER and DEXTER fame) with a bag of money retrieved from the site of the massacre and unwittingly sets some very dire events in motion. 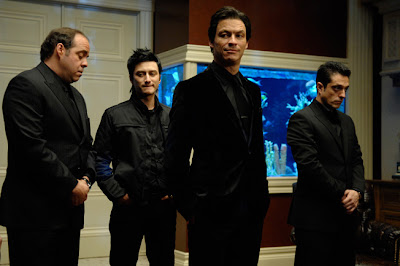 Mafia asshole Billy Russoti (Dominic West), pre-"losing face."
During another of his military actions against what remained of the mob family he'd demolished, The Punisher takes down the organization of arrogant and vain Billy Russoti (Dominic West) and savagely disfigures the capo by unceremoniously dumping him bodily into an industrial glass-grinder. How the fuck the guy survived that agonizing turn of events is beyond me, but survive he does and promptly gets plastic surgery in a futile effort to restore his face to anything resembling normalcy. In a scene just like the Joker's big post-surgery reveal in BATMAN (1989), Russotti goes completely insane once the bandages come off and renames himself Jigsaw in honor of his newly-hideous visage. 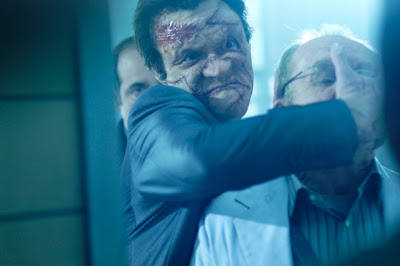 The wrath of Jigsaw.
With a loyal father-and-son pair of torpedoes in tow, Jigsaw retrieves his terrifyingly psychotic (and not to mention cannibalistic) little brother, Jimmy (Bill Hutchison), from what's pretty much a stand-in for Arkham Asylum and doggedly embarks on a two-pronged mission: get back the money that was stolen by The Punisher and fill said Punisher with so much lead that he could use his dick as a pencil.

That's the plot in a nutshell and none of the tremendous violence that ensues is bogged down by romance or mushy and inappropriate sentimentality of any kind; this film is out to provide a kickass, balls-out, SCARFACE-level shoot-'em-up violence opera of epic proportions, populated by truly vile, cartoonish bad guys who really need killing, and The Punisher's just the guy to dig the hole. Jigsaw and his uber-insane little brother steal the movie, but there are several memorable baddies throughout (including a dreadlocked black meth-head with an Irish accent who leads a like-minded gang that jumps all over rooftops like cut-rate free-running stuntmen a la CASINO ROYALE) and a well-cast Wayne (Newman from SEINFELD) Knight shows up as The Punisher's computer genius armorer and intelligence-gatherer, Microchip. 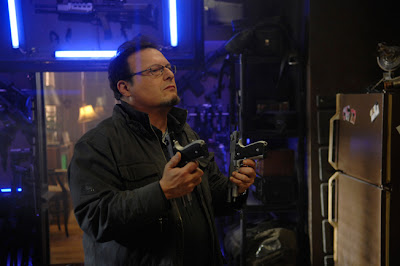 Wayne Knight as Microchip.
The bottom line is that if you're looking for William Styron you'll be shit outta luck, but if you're after the most fun and bombastic piece of "action figure cinema" to come out since, arguably, KILL BILL VOL. 1, you should put this on your Netflix queue immediately. TRUST YER BUNCHE and stock up on brews and invite as many friends as possible over to share the good times. It's a literal riot and I will defend it proudly. It's not as reality-warping insane as DEATH WISH 3 (1985), but few films are and this one will do quite nicely until something that mind-meltingly idiotic is once more unleashed.
Posted by Bunche (pop culture ronin) at Tuesday, April 07, 2009

I was going to pass on this one...since the second attempt at The Punisher was merely far better than the first attempt (though still pretty sucky)...but you've convinced me. Onto the Netflix queue it goes.

However, I have to get some Teen Titans first for my little girl before I can enjoy the mayhem and bloodshed.

This movie was so much fun. I was laughing my ass off at the way the Punisher would off some people. Especially the scene when he shoots on of Jigsaws guys in the face at the table. Hilarious.

It has become one of my favorite 'B' movies of all time!

I'm off to watch it again.

Shit, now I'm pissed I let this pass in the theaters. I didn't know Newman was in it! I love that guy in everything he's in!