WATCHMEN: TALES OF THE BLACK FREIGHTER/UNDER THE HOOD (2009) 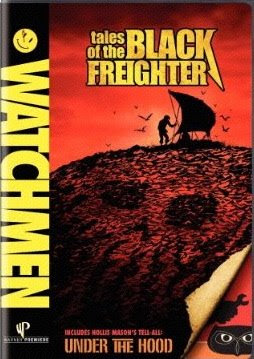 Just when I thought I’d experienced all the WATCHMEN-related filmmaking 2009 had to offer, this DVD comes out featuring two of the ancillary bits of business from the landmark graphic novel. From what I’ve heard and read, the material was meant for inclusion in the feature film but was left out in favor of bringing in the theatrical release with a running time under seventeen hours, and unless the footage was used very judiciously it would have brought the action to a screeching and somewhat disjointed halt.

Back in the bygone days of yore when I first read the WATCHMEN graphic novel, one of the few things that I solidly did not enjoy about it was the TALES OF THE BLACK FREIGHTER comic-within-a-comic that reflected how comic books may have turned out in a world that actually had costumed adventurers running around. The rationale for BLACK FREIGHTER was that while eschewing superheroes the comics biz instead latched onto pirates as fodder for stories, and TALES OF THE BLACK FREIGHTER was a particularly gruesome example of the genre, relating the story of a ship’s captain who survives the horrific scuttling of his ship and the butchering of his crew only to find himself cast away on an island where he builds a raft from the gas-bloated corpses of what remained of his crew. He then sets back to sea in an effort to make it home before the eponymous vessel makes it to where his wife and daughters live and destroys them with its crew of possibly demonic buccaneers. His journey is harrowing and filled with hunger, shark attacks and festering madness punctuated with flowery narration, all of which is, I’ve been told, meant to be a synonymous parallel to the events of WATCHMEN’s main narrative thrust.

I’ve heard that explanation for TALES OF THE BLACK FREIGHTER’s inclusion in the graphic novel for the past twenty-three years and read many other interpretations of its meaning, and no matter how many times I’ve gone over all that information I have never been able to stomach that pirate bullshit. I’ve read WATCHMEN perhaps five times and I’ve intentionally skipped TALES OF THE BLACK FREIGHTER since my initial reading. No matter how much I’ve read about its intent or had it explained to me by assorted writers and literary critics, I think it's a huge, floating load of pretentiousness that offers nothing to the overall narrative, stopping the story’s momentum outright, and its omission from the film was nothing short of a narrative godsend. And now TALES OF THE BLACK FREIGHTER has hit DVD, fully animated, bringing its pointless turgidity straight from the pages of the graphic novel to your TV screen.

While well-crafted as an animation piece, all of the things that made TALES OF THE BLACK FREIGHTER so annoying in the first place seem amplified when presented uninterrupted by chapter-to-chapter breaks. It’s a loooong twenty-six minutes loaded to the gills with gore and savagery that would possibly have landed a live action interpretation an NC-17, yet it’s dull and so slow-moving that it seems a hell of a lot longer than it actually is. The relentless violence and misery are a total downer, and once the end credits finally roll the numbed viewer is further pummeled into submission by the jaw-droppingly inappropriate and awful theme song sung by Nina Simone. It’s a jazz tune — jazz and apocalyptic piracy metaphors? What the hell were they thinking? — that features howlingly idiotic lyrics delivered in a quavering bellow that caused my mouth to hang open during its duration, and I actually laughed out loud while proclaiming, “You have got to be fucking kidding me!!!” In fact I actually recommend seeing TALES OF THE BLACK FREIGHTER just so you can share in my bewilderment at the song in question, but that’s the only thing about it that I recommend, and that’s only recommended because the song is just so fucking terrible. 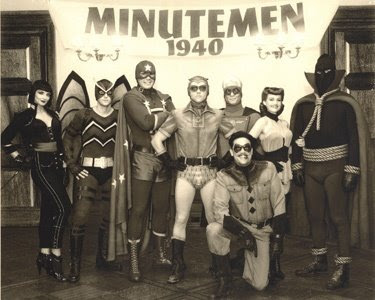 While TALES OF THE BLACK FREIGHTER actually manages to be worse than its four-color source, UNDER THE HOOD is a very engaging thirty-six minute translation of the graphic novel’s excerpts from Hollis Mason’s best-selling autobiography. Mason was the 1940’s-era Nite Owl, one of the Minutemen, the first group of real-world costumed crime-fighters, and his memoirs are brought to vivid documentary-styled life with compelling gusto. Framed as a 60 MINUTES-esque television news magazine segment originally aired in 1975, UNDER THE HOOD feels quite realistic and showcases Mason’s history along with that of the Minutemen and the heroes for whom they served as an inspiration, namely the latter day Watchmen. Mason (Stephen McHattie) comes off as a genial sort who wanted to make a difference in his world, first as a cop and later as a costumed vigilante, and his story will hold your undivided attention, punctuated by anecdotes from a number of colleagues, foes, man-on-the-street observers and, most notably, Sally Juspeczyk (Carla Gugino), aka Sally Jupiter, the original Silk Spectre. It’s good stuff that more than makes up for the uninvolving excesses of TALES OF THE BLACK FREIGHTER, and makes me wonder exactly why BLACK FREIGHTER was chosen as the headlining attraction for the DVD release. UNDER THE HOOD is live action and directly figures into WATCHMEN’s narrative and would therefore conceivably be of more interest to both the comics geek and the civilian audience member, so why draw attention to a pretentious cartoon? I have no answer to that question, but whatever the case the damage has been done and I’ll be curious to see how well this DVD sells. And I’m even more curious to see how footage from these two films will be integrated into the upcoming director’s cut DVD of WATCHMEN…
Posted by Bunche (pop culture ronin) at Monday, April 06, 2009

I read the Watchmen once in college and remember enjoying it BUT then when I read it again almost two decades later b4 the release of the flick I was stunned by how little I remembered about it. The Black Frieghter business completely slipped my mind. But you know after re-reading it made a real impression on me. I thought it was ironic that in a world where so much sturm und drung was popping everyday you got this part of the story where this kid is totally engrossed in this mouldy old pirate story. Plus I just thought it was properly baroque and over done. I'd love to see both features at some point. Does this mean though that this material WON'T be on the legitimate DVD release? Thieving SOBs!