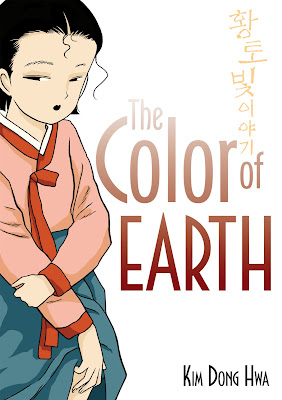 Originally published in Korea some six years ago, Kim Dong Hwa's THE COLOR OF EARTH is the first part of a trilogy and is hands-down the best graphic novel I've read in years. People who know me personally and readers of this blog may be somewhat shocked to find me championing a comic that has no violence, monsters, space aliens, jungle girls, dinosaurs or any of the other stuff that usually lights me up, but let me assure you that this is well worth your time and hard-earned scratch.

Spinning the story of protagonist Ehwa and her widowed-too-young mother set against an idyllic rural Korean background, author Kim weaves a charming, engrossing and very real-feeling chronicle of a little girl's transition from seven-year-old childhood to young womanhood, showcasing all of the awkwardness and confusion that everyone went through at that stage of life. It's touching, heartfelt, beautifully illustrated and features the best-written female characters I've ever seen in comics; most of my friends are women and I've always been a "girls' guy," so it all felt and read just right to me. My only complaint about this book is that I read it before the two subsequent volumes are out, because now that I've gotten to know Ehwa and her mom I want to read more about them. TRUST YER BUNCHE and seek this one out, especially if you know any young girls who would appreciate a book that they can most likely relate to. I recommend it for anyone over the age of ten, meaning an age where the reader is aware of the basic facts of puberty, and suggest that readers of both genders give the superhero stuff a rest and check it out. HIGHEST RECOMMENDATION.
Posted by Bunche (pop culture ronin) at Saturday, April 04, 2009

Y'know, South Korea now is what Hong Kong was 15 years ago: a center of vital creativity that we westerners are only beginning to appreciate. Films like Tae Guk Gee, My Beautiful Mari, The Host and Oldboy (among others) have showcased the growing savvy and increased resources and vision of Korean entertainment. Sure, that work displays obvious roots in American and Japanese pop culture; the vision, though, is growing truer and truer all the time, and their quality, these days, is far higher.