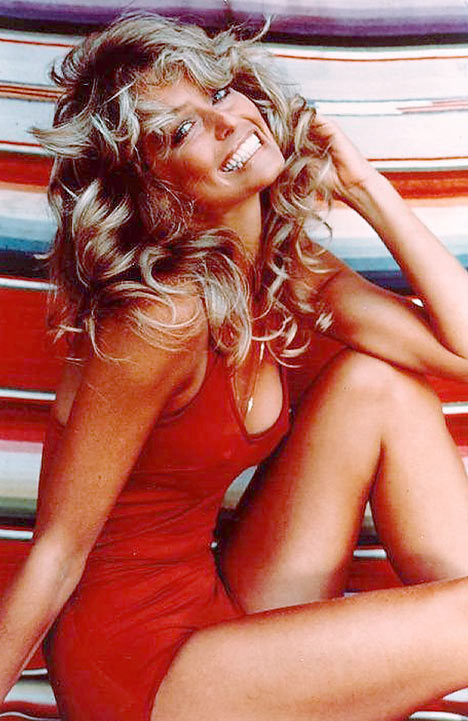 The 1976 poster that conquered America.


The 1940's had a cheeky Betty Grable looking over her shoulder while sporting a cute one-piece bathing suit, the 1950's found Marilyn Monroe luxuriating in the nude on that stunning tableau of red satin sheets, and the 1960's gave us Raquel Welch proving that cavewomen wore smokin'-hot fur bikinis and apparently had stylists and professional waxers at their disposal. For most of the horny kids of my generation, the 1970's pinup/poster ne plus ultra was undoubtedly the image of blonde Farrah Fawcett, her face split by an ear-to-ear smile, in that famous red swimsuit. Whenever I hear the term "iconic" in reference to that time in my formative years, the Farrah poster, which by some estimates sold as many as twelve-million copies, is the first thing that springs to mind. Of the myriad fads and pop culture juggernauts of the 1970's, perhaps only STAR WARS looms as large over that era as that simple descendant of the pinup.

Looked back upon from a vantage point of over thirty years I'm personally at a loss as to explain the popularity of that image, especially when the 1970's had women like Lynda Carter running around (to say nothing of Farrah's CHARLIE'S ANGELS colleague, Jaclyn Smith), but my tastes have seldom run to blondes so that more than likely has something to do with my confusion (that and the undeniable fact that I'm a boob man to the core). Whatever the case, I just did not get it, but nearly every single one of my male contemporaries certainly did and they would have preferred the loss of a limb over missing the latest installment of CHARLIE'S ANGELS. (I felt that way about WONDER WOMAN, despite the fact that it sucked as well. That show would have been relegated to well-deserved and total obscurity if not for the appropriately goddess-like Lynda Carter.) 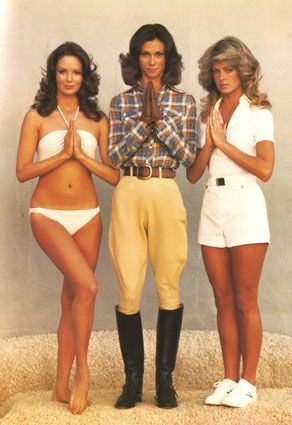 Well, I'm about to commit blasphemy by saying I thought CHARLIE'S ANGELS fucking sucked then and think it still sucks to this day. I completely get the appeal of a "jiggle" show, but it bored the crap out of me and I could always get my fix for hot TV babes via reruns of shows like STAR TREK, BATMAN, THE AVENGERS, and the now more or less forgotten PETTYCOAT JUNCTION. Hell, even the execrable THE MISADVENTURES OF SHERIFF LOBO was kind enough to feature 1979 Playmate of the Year Candy Loving, so I had no need of Miss Fawcett's "California uber alles" charms. (Yeah, I know that SHERIFF LOBO episode aired in 1980, but for all intents and purposes the '70's had not quite ended and the 1980's as we really remember them didn't get off the ground as such until some time after 1982 or thereabouts.)

Anyway, once the seventies ended and Fawcett strove to shed her vacant poster image by proving she could act, she surprised the hell out of everyone with her 1983 off-Broadway stage role in 1982's EXTREMITIES (she replaced Susan Sarandon in the part) and the 1984 TV movie THE BURNING BED. I didn't see either the stage or screen version of EXTREMITIES but I did see THE BURNING BED when it first aired, and lemme tell ya it totally kicked my ass. From that moment on I respected Fawcett as a legitimate actress and I actually enjoyed seeing her in non-ANGELS roles when I encountered them, which was no mean feat after the awful SATURN 3 (1980).

So with that I bid Fawcett a respectful if not gushing farewell, and if my less-than-reverent eulogy doesn't do it for you, I urge you to look elsewhere on the Internet for reminiscences and the like that come from her entrenched fans. All I have to say in summation is that I would not have wished her death on anyone, not even my worst enemy, and I was genuinely saddened to hear of the circumstances of her passing.
Posted by Bunche (pop culture ronin) at Friday, June 26, 2009

And yeah - a long, lingering death by cancer is an ugly fate no one (with the exceptions of Dick Chaney, Rush Limbaugh and Osama bin Ladin) deserves to endure.

So Candy Loving was on Lobo? That might actually make it worth looking up on youtube - she was always my favorite Playboy girl. (Well, her and Dona Spier; Hard Ticket to Hawaii pretty much cured me of my crush on Dona, though. So much prettier when you didn't have to hear her try to act...)

I saw the movie version of Extremities, and THAT kicked my ass. She was an awesome actress. Her looks did not stir my lesbian tendancies either, but I still appreciated her beauty and am mourning her today...

You should see Extremities, Bunche, for its cinematic groundbreaking element, as well as some kick-ass wounding with wasp spray.