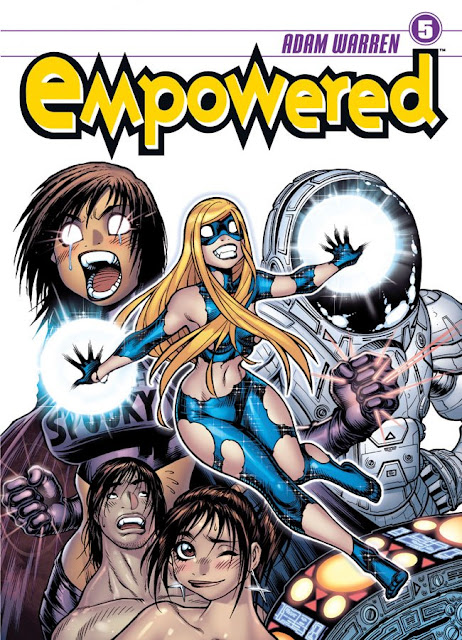 Adam Warren's excellent EMPOWERED is back with this latest all-new graphic novel, and the eight-month wait between doses was once again totally worth it.

Picking up immediately after the events at last volume's superhero awards ceremony, our heroine's life continues to spiral down the shitter while some very interesting plot developments occur. You know how when you read any superhero comics series regularly there is the occasional issue where nothing much happens, but the character stuff that takes place in lieu of world-shattering action or spandex-clad punch-ups is every bit as compelling as gratuitous sex and violence? This volume is one of those issues, and it's a 208-page tour de force of character development and simply gaw-juss artwork that more than justifies its $14.95 cover price.

This volume can't really be discussed in detail without ruining its fun, so here's as much as I can say without doing much spoiling:
Again, this one's mostly character stuff, but it all culminates in a final chapter that is both totally shattering and a testament to Emp's evolution as a superhero. This one ups the stakes tremendously and despite a few moments of much-needed levity, it's as serious as a heart attack. Definitely a fucking huge TO BE CONTINUED, the months of waiting can now commence and they will be agonizing. Adam Warren, you rule. You completely fucking rule. HIGHEST RECOMMENDATION.
Posted by Bunche (pop culture ronin) at Sunday, June 28, 2009

Can't wait. Getting #4 and possibly #5 with my nexy paycheck. I've been loving this book, and consider its compact storytelling and concise character development to be amonst the best in recent comics media. Who'd've thunk it?

The only thing that bugs me are the blacked-out word bubbles. Jeezus, Adam - if you're gonna have a skull-fucking incindiary device as your Big Bad, why exactly are you censoring the word "shit"? Okay, the effect is sometimes amusing; more often than not, though, it's distracting as hell.