I DONE BEEN CONFUSED (WIF SOMEONE ELSE)

This past weekend saw this summer's Big Apple Con take place at NYC's Pennsylvania Hotel, with free admission no less, and I decided to attend so I could finally meet Kevin O'Neill, the illustrative hand behind NEMESIS THE WARLOCK (one of the classics from the early years of 2000 AD) and THE LEAGUE OF EXTRAORDINARY GENTLEMEN. Making my way into the show, I was met with a decent-sized dealer's room and a small adjoining space where assorted comics biz types and B to D list celebs were available to sign stuff for the fans, and it was in the latter area that I located Kevin O'Neill.

O'Neill turned out to be just as amiable as the majority of the British talent I've encountered over the years, both in my professional capacity and not, and he was kind enough to sign my small mountain of NEMESIS and LEAGUE-related items, regaling me all the while with tales of his career and his upcoming gallery show in London (I would post a link for it here, but the online site doesn't go live until July 8th). But then, as we were in mid-conversation, we were interrupted by another big name in the comics-biz, someone who's very familiar to many of you out there, but I'm refraining from identifying him by name for reasons soon to be made apparent.

I've known the guy in question since my early days in the Marvel Bullpen and have spoken with him at length during my time in DC's production department, a couple of times specifically relating to fixes that had to be done on a book he was writing for the company at the time. In short, he knows me by name and has greeted me with such when we've crossed paths. This time, however, he had a bit of a high-handed air about himself, and after having stepped all over my conversation with O'Neill for about six minutes, he took it upon himself to floridly introduce me to Kevin, as though I hadn't the social graces to have done so myself. "Oh, and, Kevin," says the comics-biz celeb, "This is Jamal."

"Jamal?" I hear you ask. "Who the flying fuck is Jamal?" Well, dear Vaulties, Jamal is none other than Jamal Igle, a talented comics penciler who has worked on FIRESTORM and a number of other things over the years, and this is a picture of him: 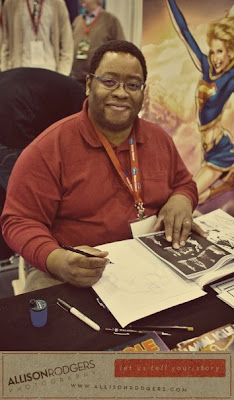 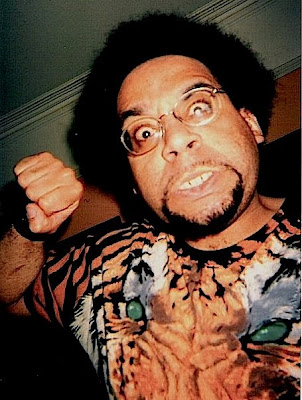 I think it's fair to say that although we are both overweight, bespectacled males of the African-American variety who do not speak dialect, there are significant differences in our appearances.

Anyway, I immediately and politely cut the celeb off and stated, "Um, no, Comics-Biz Celebrity. I'm Bunche. He's Jamal," at which point I directed the celeb's gaze to Jamal Igle, who was sitting three seats to Kevin O'Neill's immediate right, merrily signing comics for his admirers. His gaffe was brushed off by the celeb with an annoyed, "Whatever" before he returned to conversing with O'Neill.

I just got off the phone after relating the previous story to Fred Haynes, a former colleague from both Marvel and DC (who's still at DC) who's also a comics-biz Negro, and he nearly hacked up his lungs with laughter upon hearing it. Whatever the case, the comics-biz celeb in question is now off my list.
Posted by Bunche (pop culture ronin) at Thursday, June 18, 2009

Oh c'mon now, do you know how many times I was confused with Pond Scum when I was at Marvel? And we look less alike than you and Jamal.

Well, you ARE both wearing glasses...

and Jared - I think when they were calling you "Scum" they might not have been referring to Scott. ;-P

Was it the celeb with a urinary problem? Or perhaps the one who needs to spend more time working on comics and less on TV appearances?

Not even giving us a clue who it is, are ya?

Jeez, get over it already Jamal.

I met Jamal this weekend!

You're a saint for keeping your composure. When will people learn that we don't all look alike!?!?!?!