ONE TOKE OVER THE LINE 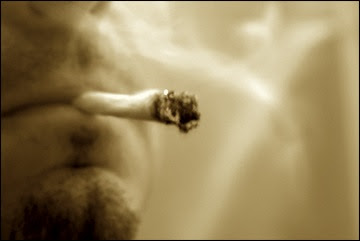 This past Saturday/Sunday was spent in the company of my extended family — henceforth referred to as my family — and it was during the somewhat-Bacchanalian festivities of Saturday night that I have officially decided my love affair with marijuana has reached a long overdue conclusion.

Those of you who've known me for a long time remember quite vividly my years as a fairly serious stoner, and some have expressed quite a bit of surprise at how drastically my consumption of both weed and booze have fallen by the wayside in the past few years. Well, the truth of the matter is that during my years of heavy-duty drinking and definite inhaling, I was incredibly unhappy with damned near every aspect of my life and sought any form of artificial refuge I could find (although I never graduated to the hard stuff), and in the process subconsciously set about trying to do myself in rather than face my deep-rooted dissatisfaction and overall disappointment with life. So I actively cultivated a "party guy" persona and stupidly kept it up for waaaaay longer than even remotely appropriate, and it was during my time working at the barbecue joint that I had the epiphany that clued me into what I was doing to myself, something probably evident to anyone with the wherewithal to cut through my bullshit. On a nightly basis at that job I was drinking like a fish and occasionally sharing joints or bowl-hits with some of the regular clientele (outside the place, and, admittedly, sometimes under the kitchen's industrial hood fan), and when I noticed I was waking up the next day and suffering no deleterious effects, that was a hint and a half for my beige ass and I did some serious rumination on why I was continually self-medicating. Upon reaching the conclusion I already related to you, I cut out about 96% of what I'd been doing and don't miss the ludicrous excess. Instead I now only drink socially and responsibly, with maybe an occasional beer keeping residence in my fridge until needed, and I have not actively pursued weed in well over two years, taking maybe two hits since leaving the barbecue joint and specifically only when hanging with my dear friend Arizona. Quitting my overindulgence with assorted mind-altering substances has not made my issues go away, but at least I'm now no longer running from them and am making day-to-day progress in dealing with my bullshit. I draw strength from my family, and I can't believe I wasted so much time surrounded by their love and support but seldom allowing myself to accept it in ways that matter.

Which brings me to the events of this weekend.

This weekend saw the family hauling its collective ass to New Hamburg, a rustic environ about an hour and a half or so from Manhattan, where we assembled at a lodge with several attendant cabins for a massive cookout/booze-up, and among the guests was a guy whom I hadn't seen in a few years, but was one of my freshman residents during the infamous year when I was the hide-in-plain-sight one-man Cheech & Chong RA in SUNY at Purchase's E dormitory (Fall 1986-Spring 1987). 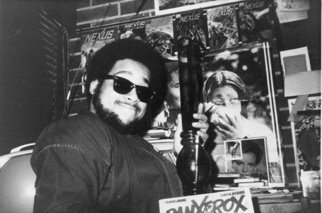 Yer Bunche: perpetually baked in the second half of the Eighties.

When this future success story arrived as a wide-eyed, long-haired freshman, I welcomed him to the campus with a few friendly bonghits, and he would later return the favor with some quality hits from a sturdy water-pipe he'd beautifully crafted from antique wood and saxophone parts, imaginatively dubbed "the Saxobong." That act of other-than-nicotinal bonding left a lasting impression on the young lad, so when he drove in to New Hamburg on his gorgeous Triumph motorcycle — an agonizing five-hour ride from Rhode Island in the pissing rain — one of the first things he did once he got himself out of his rain-soaked biker leathers was to hand me a bag of quality ganja and some rolling papers. He looked at me with an expression of genuine sweetness and warmth — he's a lovely human being who is impossible not to like — and said, "In honor of how you welcomed me when we first met back at school." I took the bag and immediately set about creating a decent joint, a skill I had not put to the test in quite some time, and shortly there was a "funny cigarette" to be shared by various family members who shall remain unnamed here, in order to shield them from the possible (though unlikely) wrath of spouses, employers, and students who may read this blog.

This was the first time I smoked since I honestly can't remember when, and while it held some of the effects that were by now familiar after first encountering them some twenty-five years ago, all I felt from it was a sense of "been there, done that" and a noticeable elevation of my heart rate, something I would rather avoid entirely. While I experienced that pounding of my ticker and an utterly unfounded sense of slight paranoia, I realized just how out of practice I was with this kind of thing, and then and there resolved that this would be my final foray into the once-treasured state brought about by an intimate relationship with Tetrahydrocannabinol (that's an eggheaded/pretentious way to say "THC"). I'd pretty much given up on it for all intents and purposes anyway, but this "circle of stonage" moment seemed to me an almost poetically perfect coda to my two-plus decades of Marley-ism, so with that I bid a fond farewell to "Sweetleaf" and move on.

Thank you, blessed herbal panacea, for all the good states of mind you guided me into. Thank you for opening my perceptions of how music could be looked at from previously unconsidered perspectives — the Who's "Pictures of Lily" and Keith Moon's drumming after some serious Hawaiian buds was revelation — for helping me to calm some of the vast rage I'd held onto since childhood, allowing me to marvel at the beauty of art for hours at a time without getting bored, granting me better ability to understand my body's processing of the martial disciplines, a greater enjoyment of food that made me completely re-think my approach to cooking, and the heightened tactility of sex that served to make the most pleasurable of physical experiences an open book of two-way sensual discovery. I will never forget you, but if truth be told, you are now a once-beloved security blanket that I'm finally certain I've outgrown. Goodbye, and may you serve others the same way you served me.

Am I going to be the only hold out from the old days, gazing at life through a veil of sweet smoke?

More power to you..but I feel like a brother in arms has fallen in battle.

They'll take my herb when they pry it from my cold dead hands, to paraphrase a certain group of nutcases.

I too have probably done my last puff. It makes me sad. But my stroke, and the elevated heart rate when I smoke, means I really can't. I would puff, then feel paranoia and fear. It isn't worth it. But, man, the wonderful feeling of music when high.... it's hard.

By the way, I am inviting my friends -- you certainly qualify -- to my Homecoming. This Friday, the 27th, at Quarter, 8 PM. I hope to see you there!

Funny. I was just talking about this subject with my partner Damiana this morning, and my buddy/ collaborator/ ink bestower Bryan Syme last night. Neither of them have expressed an herbal fondness (Bryan just isn't interested, Dami had a stoner lover who soured her on recreational chemistry early on), whereas I have... um, indulged... on and off since high school. In both conversations, I'd said that I'd always had a "take it or leave it" attitude to pot, so much so that I've gone years without a toke and could easily do so for the rest of my life. At that point, I also cued to the idea that stoning out is fun when you're 16, common when you're 20, but vergin on pathetic when you're 45. Yeah, Bunche - you are a legend in Stonertown, but I think you're right here, too. Best, perhaps, when you're (no longer) a head. ;)

I have to admit, this does make me a little sad. I hear ya though...people do take to the toke quite often to literally ignite a happiness that's missing in their own lives. However people also take an all or nothing attitude with the sweet leaf. It's all about moderation, and what's right for you. I respect you doing what's right for you, and will miss you as one of us.