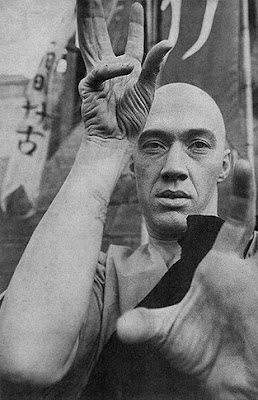 I just heard that David Carradine, star of the 1970's cult TV series KUNG FU (1972-1975), was found dead in a hotel room in Bangkok, hanged in what may have been a suicide. I'll post more details when I get them, but for now here's what the Associated Press has on it:

BANGKOK — Actor David Carradine, star of the 1970s TV series “Kung Fu” who also had a wide-ranging career in the movies, has been found dead in the Thai capital, Bangkok. A news report said he was found hanged in his hotel room and was believed to have committed suicide. A spokesman for the U.S. Embassy, Michael Turner, confirmed the death of the 72-year-old actor. He said Carradine died either late Wednesday or early Thursday, but he could not provide further details out of consideration for his family. The Web site of the Thai newspaper The Nation cited unidentified police sources as saying Carradine was found Thursday hanged in his luxury hotel room and is believed to have committed suicide. Carradine was a leading member of a venerable Hollywood acting family that included his father, character actor John Carradine, and brother Keith. In all, he appeared in more than 100 feature films with such directors as Martin Scorsese, Ingmar Bergman and Hal Ashby. But he was best known for his role as Kwai Chang Caine, a Shaolin priest traveling the 1800s American frontier West in the TV series “Kung Fu,” which aired in 1972-75. He reprised the role in a mid-1980s TV movie and played Caine’s grandson in the 1990s syndicated series “Kung Fu: The Legend Continues.” He returned to the top in recent years as the title character in Quentin Tarantino’s two-part saga “Kill Bill.”
Posted by Bunche (pop culture ronin) at Thursday, June 04, 2009

Pretty sure it was AEA.

Sadly, I've been leaning toward that conclusion all day...

AEA - Aircrafts Electronics Association? what would they have to do with it?

I understand kinky....I really do...even kinks that strike me as silly or gross...but kinky that can get you killed just confuses me.