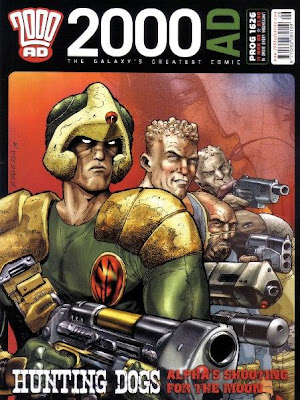 "Blood Moon," the latest serial in the post-killing off-of-Johnny-Alpha reboot of 2000 AD's classic series STRONTIUM DOG, has recently wound up and speaking as a STRONTIUM DOG fan of nearly three decades I've gotta say I was mostly underwhelmed.

Co-creators John Wagner and Carlos Ezquerra (with art assists by Ezquerra's son, Hector) return to the early days of mutant hero Johnny Alpha, specifically his time as a freedom fighter/terrorist for the Mutant Army, and place him squarely in the sights of the insane General Moon, a cold figure with little concern for anything other than keeping a tight grip on his troops and making sure any humans who cross his path meet with a swift and terrible end. When a reconnaissance mission coincides with the bombing suicide of an alleged mutant girl Johnny fancied and the discovery that General Moon is a homicidal maniac, Johnny vows to find and destroy Moon, thus setting in motion the wheels of a rather by-the-numbers STRONTIUM DOG tale. The whole thing doesn't really come to life until the later chapters when it regains the "Sergio Leone in space" flavor and tone that made the series famous, and up to that point it's the usual avalanche of double-crosses, would-be death traps, Eastwood-esque tough guy dialogue. But when it does come to life we get treated to Johnny discovering where Moon's been hiding out and the rounding up of a team of hand-picked "best of the best" Search/Destroy bounty hunters to supposedly bring the bastard in for a hefty promised reward — a team including good old Middenface McNulty, Evans the Fist, and the Torso from Newcastle — but then the "been there, done that" aspect once more kicks in and the whole thing ends on a so-so note.

I expect better from Wagner and Ezquerra and hopefully they'll turn in something much better next time, however I earnestly implore the powers that be at 2000 AD to stop allowing Ezquerra to color his own work because it's garish, candy-colored tones don't sit well with STRONTIUM DOG'S well established dour and dirty visual aesthetic. In fact, just do us all a favor and restore the series to its glorious black and white! Compare the work seen on the series in the past ten years (in color) to the work Ezquerra was doing before the series went to color and you'll see a considerable difference in quality. He's relying too much on his computer to fill in the visual gaps, and lemme tell ya the guy's no Matt Hollingsworth...

Well, so much for the latest SD, and now the year-or-more-long wait until the next installment rolls around. There used to be a time when I could pick up 2000 AD and read it cover to cover, happily plunking down the import price to sample its wonders, but these days I read it solely for whenever STRONTIUM DOG shows up or when there's a new series of the excellent KINGDOM (a collected edition of which will be reviewed soon). Chris Weston swears up and down that the new series CRADLEGRAVE is very much worth following, so I'll give that a chance as well. And I also have the collections of the classic Two Thou material to keep me happy; the much-lauded very early 2000 AD series FLESH is scheduled to be released in a collected edition in August, and I await it with baited breath. Sadly, such is not the case for future STRONTIUM DOG stories if things keep up the way they've been going.
Posted by Bunche (pop culture ronin) at Wednesday, June 03, 2009