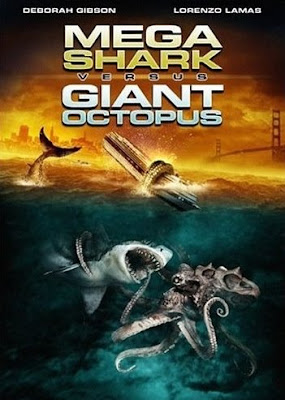 I'll just cut straight to the chase: this movie sucks ass. The trailer and clips available on the Internet are all you need to bother with because the movie itself is a slow-moving waste of time, replete with bottom of the barrel CGI effects that wouldn't have passed muster on HERCULES: THE LEGENDARY JOURNEYS fourteen years ago.

In case you actually give a fuck about the plot, what happens is a giant octopus and a Megalodon — that's archeology/egghead-speak for "big-assed Great White shark lookalike" — are freed after eons of being frozen in a chunk of ice (in mid-combat, no less), and the second they get loose they go on a rampage of destruction that we're mostly just told about rather than shown. Instead we're forced to endure the goo-goo eyes being made between marine biologist/ace submarine pilot Deborah Gibson — yes, that Deborah Gibson — and a Japanese colleague, and it only gets more turgid and "who cares?" when the scientists are press-ganged into service by the U.S. military and forced to work under the supervision of Lorenzo Lamas as a military type who's such an obnoxious racist that he's easily the funniest thing in the movie (which isn't saying much). The scientists come up with a plan to lure the beasts to two different locations using species-specific pheremones, but that plan backfires when the mega shark makes its way to San Francisco and bites the Golden Gate Bridge in half while the octopus wreaks similar havoc in Tokyo, a could-have-been-fun bit that we're merely told about instead of shown. 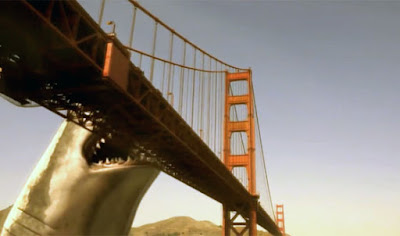 Yes, this actually happens, and you just won't care.

Seriously, dear Vaulties, even during the brief moments when there's giant monster stuff, sometimes it's so poorly rendered in CGI that the image it out of focus, presumably so the animators don't have to expend the time and budget to actually make it look halfway decent. For example, there's a potentially terrific and still hilarious sequence in which the mega shark flies several hundred feet into the air and brings down a 747, but if you check it out for yourself (about 2:23 into the clip) you'll see the shark and plane suddenly go out of focus as the plane explodes and all involved plummet into the ocean. That and the bit with the bridge are the only things in the entire movie worth seeing and they both add up to about a solid minute's worth of screen time, so it just isn't worth enduring the complete film. A huge disappointment in all areas, I wouldn't recommend this to anyone, not even fellow giant monster junkies. Hell, even the made-for television SPRING BREAK SHARK ATTACK (2005) was more fun than this in every way. Fuck MEGA SHARK VERSUS GIANT OCTOPUS right in the gills!
Posted by Bunche (pop culture ronin) at Sunday, June 07, 2009