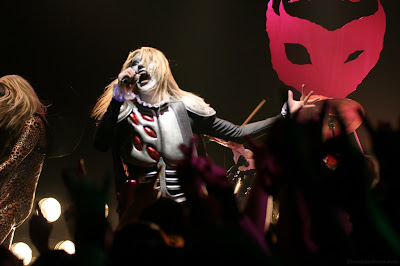 NOTE: despite my reputation as a prolific blogger, I'm occasionally as much of a lazy turd as the next guy, so portions of this review are cribbed from a piece I posted back in February. Just in case you thought some of this drivel looked familiar...

Ever since falling in love with Kiminori Wakasugi's hilarious manga series DETROIT METAL CITY, I'd been jonesing to get my mitts on a subtitled copy of the DVD, and I finally obtained one at last weekend's Big Apple Convention. I remembered seeing some untranslated hype material for the live-action film version (it's also been animated) at the 2008 NY Comicon and at the time I dismissed it as the latest lame-assed Japanese filtering of Western stupidity, but now, having devoured the manga and almost pissing myself with laughter while doing it, I'm the first to admit my prejudicial error and happily proclaim DETROIT METAL CITY to be among the funniest of the post-THIS IS SPINAL TAP lampoons of the heavy metal genre (or in this case, the "death metal" sub-genre). 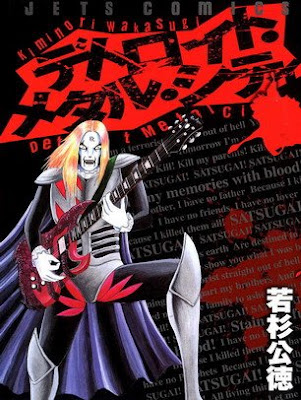 DETROIT METAL CITY tells the story of Soichi Negishi (pop idol Kenichi Matsuyama, who's surprisingly good here), an acoustic guitar-playing complete pussy of a musician whose fondest desire is to create songs like the Swedish pop music he adores, treacly crap that would give many listeners diabetes. 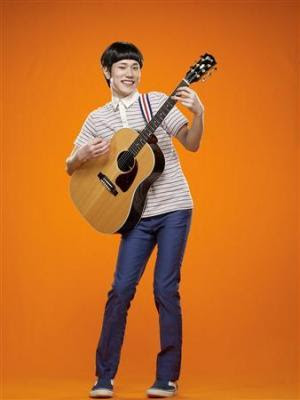 Kenichi Matsuyama as uber-pussy Soichi Negishi.
But Soichi's true gift lies in writing songs and performing as Lord Johannes Krauser II, an over-the-top-offensive death metal singer/guitarist who fronts the series' titular band. When on stage, Soichi loses himself in his demonic stage persona — whose look is more than a little bit influenced by Gene Simmons of Kiss and Mercyful Fate frontman and solo artist King Diamond — and bellows out ultra-stupid songs of rape, bestiality, matricide, patricide and damned near every other "-icide" one can think of, all the while delighting his fans who totally buy into his satanic act as the inspirationally-transgressive real deal. 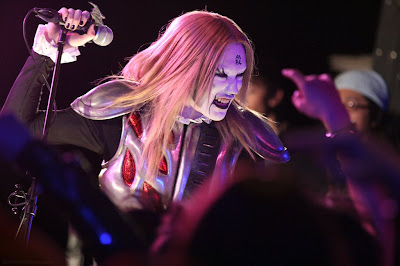 As DMC's popularity flourishes, Soichi's discomfort with his lurid stage antics grows while his insane manager (Yasuko Mitsuyuki) — who determines whether a DMC song is worthwhile by just how wet it makes her —does everything in her power to warp Soichi into a lifestyle more in line with Krauser's purported forays into garden-variety murder, cop-killing, public molestation of the innocent and cannibalism (this corruption is considerably toned down from that sequence in the comics). But despite his success and growing fame/infamy, Soichi keeps his rock 'n' roll self hidden from his friends and family out of a deep sense of shame at what he's doing, to say nothing of how being Krauser brings out parts of his personality that he never knew existed (i.e. very public displays of disrespect for authority, verbal abusiveness toward women, and generally unbecoming behavior that makes the Japanese blanch).

The movie is pretty faithful to the manga, but it plays with the narrative's structure to make it more appealing to people other than metalheads and fans of offensive humor. That move excises the aforementioned hardcore corruption of Soichi and makes his interest in a cute journalist (Rosa Kato) more of a conventional and up-front love sub-plot. But at least the filmmakers wisely retained the sub-plot about DMC going up against the retiring American "god of death metal" Jack Ill Dark for the right to be recognized as the greatest, most evil band currently active in the genre. That sequence in the manga is laugh-out-loud hilarious and though considerably tamed for the film, it's still ridiculous enough to pass muster. In fact, when Jack Ill Dark is first seen in the movie during a TV entertainment news segment on his impending retirement, I said to myself, "Y'know, Gene Simmons would have been a no-brainer to play this character..." Then, upon closer examination of the actor playing Dark, I exclaimed, "Holy shit! That is Gene Simmons," so somebody at the casting office had more on the ball than just hiring the letter-perfect guy to play Soichi/Krauser. 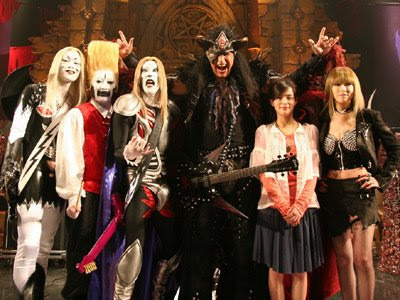 The legendary Gene Simmons of Kiss looms over the cast.
The film ends in such a way that it allows both a finite done-in-one ending and the possibility of sequels, so I hope there's more to come, only with more of the manga's utterly anarchic spirit undiluted. If you find the real-life excesses of heavy metal music in general and death metal in particular to be goofy as hell and amusing enough as is, you'll more than likely get a kick out of DETROIT METAL CITY. The only problem is that as far as I know there are no plans to release the film in the States, either theatrically or on legitimate DVD (the copy I got my hands on looks professional and the subtitles are about a 9 out of 10, but it does not appear to be a legally sanctioned release), so your best bet is to see it like I did or keep an eye open for it to turn up in Japanese film festivals, provided you live in a town or city that regularly runs such fare. 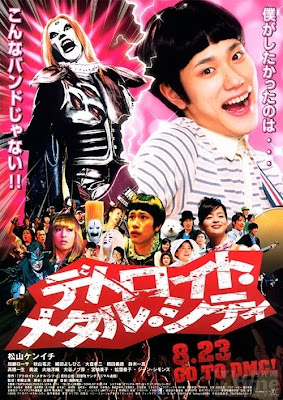