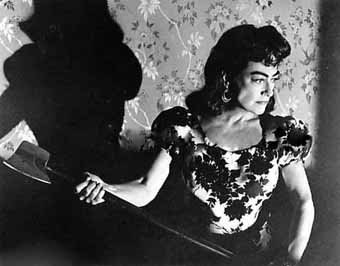 When Robert Aldrich's WHAT EVER HAPPENED TO BABY JANE? (1962) became a smash hit and simultaneously inaugurated the "hag horror" genre — horror/suspense flicks starring past-their-prime Hollywood divas — imitations were certain to follow and follow they did, and if you ask me the best of that lot was the William Castle-directed STRAIT-JACKET. Written by Robert Bloch, the author of PSYCHO, and starring Joan Crawford (who suffered so memorably when pitted against a tits-out alcoholic and insane Bette Davis in BABY JANE), the film is a brisk little thriller that shocks with its violence (for its time, mind you) and surprises with Crawford turning in a performance that's waaaaaay better than a "B" picture like this deserves.

Unlike many thrillers about supposed murderers that try and fake us out as to the protagonist's actual guilt, STRAIT-JACKET doesn't bullshit us for even one second and shows us flat out that Lucy Harbin (Crawford) did indeed murder her much younger husband (Lee Majors in his first role) and his lover with an axe, beheading the adulterers, an event witnessed by Lucy's very young daughter, Carol (who also witnessed her father getting it on with the other woman not long before the two met the wrong end of that axe). Following the double homicide, Lucy endures twenty years in a mental asylum and is eventually released to go live with her brother and sister-in-law who kindly raised Carol (Diane Baker) to young womanhood. The reunion of mother and daughter goes as well as could be hoped for, considering the twenty-year separation, loony bin incarceration and the the daughter having witnessed both adulterous sex and her mother savagely murdering the adulterers, but Lucy is still skittish and rather broken after her experiences and lashes out without much provocation or chooses to hide from all strangers.

We learn early on that Carol is in love with Michael (John Anthony Hayes), the almost personality-free son of a wealthy dairy magnate, and the two have agreed to marry, but the couple fears what will happen if her betrothed's parent's discover Carol's mother is a murderess. While that bit of soap opera drama percolates, Lucy tries to bond with her daughter and make up for all the lost years, learning about her daughter's sculpting skills and undergoing a makeover that inappropriately sees her dressing in a wig and outfit that are much too "young" for a woman of her years. When she meets her daughter's beau, Lucy is so overcome with nerves that she downs a few stiff ones and disturbingly throws herself at the young man in a sequence guaranteed to make your flesh crawl, and as if that's not bad enough, Lucy is unexpectedly visited by her former psychiatric caretaker who decides to drop in and see if she is indeed sane (he was the sole doctor at her sanity hearing who did not think she should be released). Those two incidents lead to a sad and shattering deterioration of Lucy's mental state, and there soon follows a number of gruesome axe murders that look like the handiwork of our poor, unbalanced protagonist...

STRAIT-JACKET plays like an old E.C. comic book story brought to life and is nowhere near as sophisticated as Bloch's work on PSYCHO, but it does have a visceral charm all its own and one hell of a performance from Joan Crawford. If this had not been a "B" horror flick I would bet good money that Crawford would have at least gotten an Oscar nomination. She's compelling throughout, and the scene where she snaps and tells off Michael's utter cunt of a mother is just plain heart-breaking. Also of note is George Kennedy as the hired hand who works for Lucy's brother on their farm. He's a deliciously seedy redneck stereotype, and from the second you see him you just know he's going to meet his fate on the business end of an axe; when that moment comes, it's a laughable bit of cheesy violence as an all-too-obvious fake head gets lobbed off, which only makes things that much more fun.

My only real complaint about STRAIT-JACKET is that it's a blatant WHAT EVER HAPPENED TO BABY JANE cash-in that doesn't rise to that film's level of script quality and taughtness. While the film goes to great lengths to convince us that Lucy is unraveling and reverting to her homicidal ways, it's very obvious from the moment she returns from the asylum as to who the killer is, and the final reveal is a bit of a reach for a number of reasons. Nonetheless, STRAIT-JACKET is very entertaining and a good entry-level bit of creepiness to get your kids started with. I first saw it over thirty years ago while under the very influential wing of a favorite babysitter who loved horror movies in general and "hag horror" in particular, and during that time she also turned me on to WHAT EVER HAPPENED TO BABY JANE? and Robert Aldrich's similar foloowup to that one, namely 1965's HUSH...HUSH, SWEET CHARLOTTE, all of which helped mold my own twisted sensibilities. I'd recommend these movies for kids ten and up because they're the perfect transitional flicks from fairytale creeps to a more grownup flavor of chilling horror that stems from family dysfunction and basic human cruelty, things kids will come to understand with crystal clarity as puberty hits and they enter the arena of existential misery known as junior high school. And since these films feature a particularly "female" area of horror, make sure your daughters check this shit out. (They're no CARRIE, but they'll serve until the girls are old enough to handle that film's apocalypse of puberty-horror and sadistic high school torment angst.) 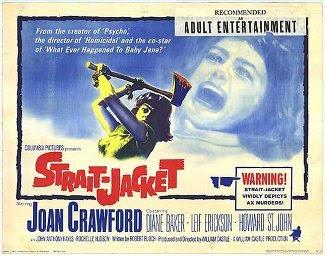 "Hag Horror".... didn't realise this genre even had a name!

Seen Bette Davis' "The Nanny"? That's a good entry in this field.

Those diary magnates did a lot better before blogs became popular. Oh, did you mean bovine diaries, in which adolescent heifers ruminate about their crushes on bulls and worry how big their udders are?