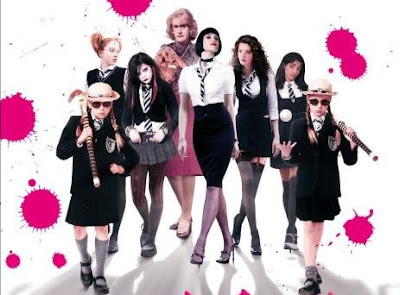 Much closer to the spirit of what creator Ronald Searle was going for with his series of 1940's-1950's cartoons about "the worst girls school in the world" than earlier cinematic incarnations, this seventh film chronicling the appalling (by pre-1960's British standards) misdeeds and chicanery of the girls of St. Trinian's private school could use a bit more of Searle's twisted vitriol, but as a twenty-first century series reboot it does a pretty damned good job, and I only have a couple of minor quibbles with it.

The setup's pretty much the same as what I encountered in the first film in the series, THE BELLES OF ST. TRINIAN'S (1954), only this time the roles of the school's headmistress and her scumbag brother (re-named Camilla and Carnaby Fritton here) are played by Rupert Everett and he's a gas as a far less innocent version of the headmistress than Alistair Sim's take on the character. 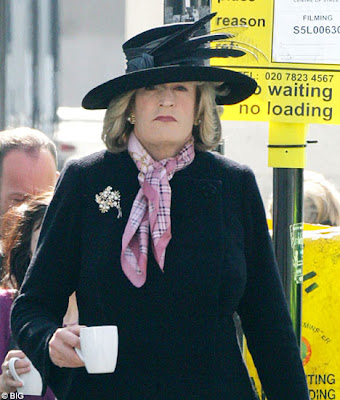 Rupert Everett as St. Trinian's headmistress, Camilla Fritton.
Once more the school finds itself in the financial shitter and drastic measures must be taken to acquire the half-million pounds needed to keep it from going under, measures involving a complex MISSION: IMPOSSIBLE-style art heist (of Vermeer's seventeenth century painting "Girl with a Pearl Earring") that's all the funnier for being masterminded and pulled off by a bunch of delinquent schoolgirls. If it sounds like lightweight stuff, it is, but it's very entertaining fluff from start to finish and it achieves the sense of twistedness that films like both ADDAMS FAMILY movies strove for and failed to conjure (although I have to give it up for the Thanksgiving play sequence in the otherwise worthless ADDAMS FAMILY VALUES). Let's face it: stories about horrible behavior, offensiveness and such are always more fun when the protagonists/perpetrators hail from a group normally held up as the epitome of sweetness and wholesomeness, and a British girls school is indeed fertile ground from which such characters can sprout.

While the school's overall student body is still very much one large hostile tribe, now with era-appropriate sub-divisions and hierarchies, this time around the tribe is given several memorable faces to represent the assorted Goths, Chavs, Emos, geeks, et cetera. The girls are all fairly broad caricatures/stereotypes, but we get to know them and root for them — my favorites being the red-headed, bespectacled leader of the geeks and the blonde pre-pubescent twins who are described as "England's answer to the Sopranos" — and when the heist takes place you'll really want them to succeed (the savage field hockey match is also a riot). Rupert Everett's a hoot as Miss Fritton and his horse-toothed drag look is hilariously horrible and especially cringe-inducing during the semi-romantic scenes between Fritton and her long-ago lover now turned enemy, Colin Firth, as the minister of education whose latest political agenda is to expose and shut down St. Trinian's.

My favorite character in the whole film, however, is Russell Brand's modern era version of series mainstay Flash Harry, a sleazy Cockney criminal opportunist who enjoys a symbiotic relationship with the girls as both a mentor in illegal doings and as the seller of their highly dangerous, classroom-brewed and blindness and death-inducing "Trinski" vodka (the toxicity levels of which are tested by a hard-drinking Russian student named Anoushka). He's a pisser here and is nearly as funny/appalling as the Eurotrash rock star asshole he memorably played in FORGETTING SARAH MARSHALL. Oh, and the bit where the girls come up with a line of designer tampons because "women don't just want to feel beautiful on the outside" nearly made me snarf my beer out of my nose.

So, yeah, I enjoyed the ST. TRINIAN'S reboot, but I do have two problems with it:
But I can overlook both of those in favor of enjoying a fun, anarchic bit of brainless fun. I have no idea if or when this film will get a U.S. release, but when it does turn up I urge you check it out. It's the kind of thing that could become a cult favorite on cable and run for years.
Posted by Bunche (pop culture ronin) at Monday, June 01, 2009