GET OFF YOUR ASS AND READ MARVEL'S "AGENTS OF ATLAS" ALREADY!!! 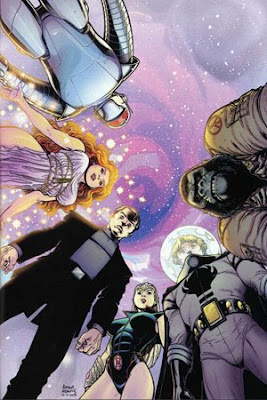 The Agents of Atlas (L-R): M-11 (aka The Human Robot), Venus, Jimmy Woo, Namora, The Uranian (aka the original Marvel Boy) and Gorilla Man.

After being convinced by the considerable oratory powers of Jim Hanley's Universe staffer Jeffrey, I took a chance and checked out the collected edition of the AGENTS OF ATLAS mini-series and the first six issues of the ongoing monthly book, and I'm hooked. No mean feat, since I'd pretty much lost faith in Marvel Comics.

AGENTS OF ATLAS is capably scripted by Jeff Parker and dredges up characters from Marvel's Golden Age, forging them into a team quite different from the by now rote Marvel supergroup that somehow manages to fight for the greater good when not being generally dysfunctional or bitching each other out. Lead by former FBI and S.H.I.E.L.D. operative Jimmy Woo — perhaps best remembered from Jim Steranko's NICK FURY: AGENT OF S.H.I.E.L.D. "Yellow Claw" arc, and also for being the rare (if not only) non-stereotypical Asian heroic leading man in 1950's comics — the team are bonded by a loyalty borne out of mutual respect for each other's skills, and it's refreshing to see a gathering of super-types who are all business. The Agents consist of: 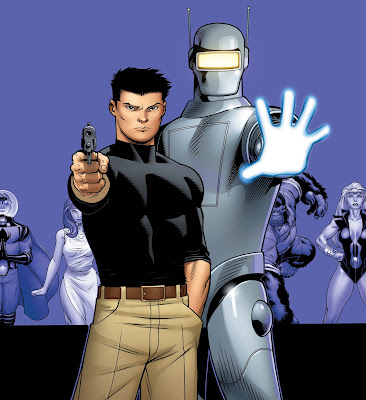 The aforementioned former FBI and S.H.I.E.L.D. agent has been rejuvenated back to his twenties and wastes no time in re-assembling his team of adventurers from the 1950's. That task might sound like it would be a bit of a bitch when taking the passage of time into account, but this is comics and anything is possible. First showing up THE YELLOW CLAW #1 (1956), Woo has obsessively pursued that book's eponymous Fu Manchu knockoff throughout his career (when not accompanying Dum Dum Dugan in battle against the Marvel version of Godzilla in the 1970's), and now he discovers there's more to his game of cat an mouse with the dreaded criminal mastermind than he'd ever imagined... M-11, the imposing old school robot, is reminiscent of Gort from the classic version of THE DAY THE EARTH STOOD STILL (1951) in both form and silent-but-deadly function and wields what can only be described as a "death ray." First appearing in MENACE #11 (1954), it gained the "human robot" sobriquet by fatally absorbing its creator's life force at its creators behest, in order to grant it free will and self-awareness. Now serving as one of the team's heavy-hitters, the robot also performs a wide variety of functions that render it an invaluable member of Woo's crew. 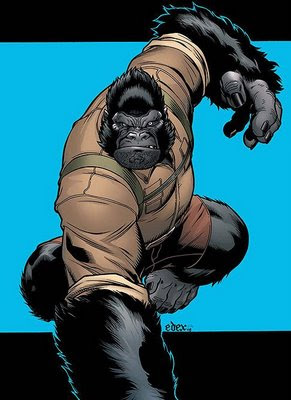 The unwitting inheritor of an ancient legacy that rendered him both bestial and immortal, former solider of fortune Ken Hale is a highly accomplished military man and long-time S.H.I.E.L.D. agent who immediately fucks off from that international law enforcement organization when Jimmy Woo recruits him on his personal quest. Expert in hand-to-hand combat and use of firearms, those skills become even more formidable when coupled with the natural strength of an adult gorilla. Ken is also the team's resident wiseass and is very much reminiscent of Ben Grimm of the Fantastic Four (aka The Thing), only minus the hatred of his transmogrified status. 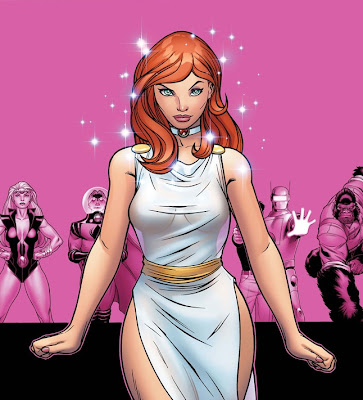 The sweet-natured Venus is a beautiful woman whose voice bends humans to her will, regardless of gender or sexual preference, although heterosexual men are by far the most readily susceptible. Invaluable for defusing hostile situations due to her ability to spread a powerful feeling of loving and good vibes, Venus appears to be the actual figure from ancient mythology, but is she exactly what she seems? I ain't sayin' nuthin'...

THE URANIAN (aka the original MARVEL BOY) 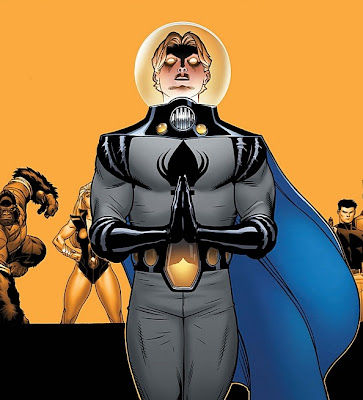 Bob Grayson was originally an ordinary human from Earth whose Jewish scientist father fled with his infant son to the planet Uranus as Hitler came into power, and once there Bob and his father were absorbed into a colony of human-like Uranians who were later revealed to be an offshoot of Earth's own Eternals (waaaay too long of a story to explain here). Bob returned to his birth-world during his teens and, using Uranian super-science, battled crime as Marvel Boy, but has since undergone radical changes in his physiognomy and abilities, changes that make him no longer necessarily categorizable as human... 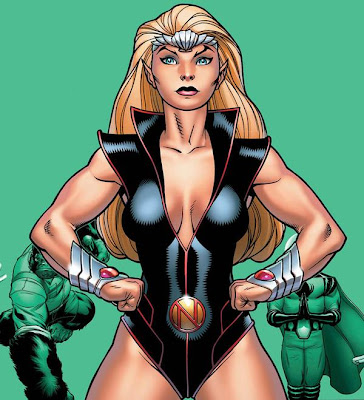 Representing for Atlantis as the "queen of the sea" and definitely the hardcore physical powerhouse of the Agents of Atlas, Namora is a human/Atlantean hybrid like her more famous cousin, Prince Namor, who's perhaps better known to the average surface-dweller as the Sub-Mariner. Able to fly, breathe underwater and swim at superhuman speed (making her a living torpedo), damned near invulnerable, powerful as a motherfucker, and armed with a nasty temper to boot (although she's on very good terms with the rest of the team), Namora is raw muscle on a scale that makes her foes blanch at the prospect of facing her in combat, and unfortunately for them she greatly enjoys busting heads. (Apparently a trait that runs in the family.)

NOTE: it's been cited several times on this blog that I'm a Sub-Mariner booster, and Namora, while not the Sub-Mariner, is certainly a Sub-Mariner, a blanket term used long ago to describe Atlanteans in general and the singular power of Namor. That said, it's good to see a writer remember just how much of a wrecker a Sub-Mariner can be, and considering what we know about the inevitable results of surface-dwellers and Atlanteans getting their hump on, how have the Atlanteans not actively instituted an interracial breeding program so they can produce legions of amphibious powerhouses? Just a little something to think about... 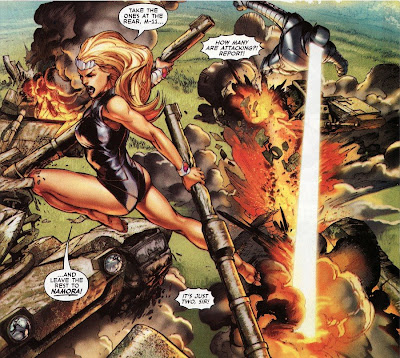 From DARK REIGN: NEW NATION #1, Namora and M-11, taking neither shit nor prisoners. God help whoever they're fighting. (Art by Carlo Pagulayan)

But exactly what causes this bizarre group of semi-forgotten characters to band together, especially now? The surprising answers to that can be found in the collected edition of the mini-series, and what follows after the events of that book only continues the fun on a monthly basis, loaded to the rafters with intrigue and often spectacular superhero action of the kind that made Marvel Comics a force to be reckoned with from 1961 through approximately 1987 (sure, there was a shitload of utter crap put out by Marvel in those days as well, but the standout material is deservedly enshrined as classic stuff).

Jeff Parker's scripting is certainly praiseworthy, but the one drawback of the book's balls-out nature is that its scenarios can be labor-intensive for its artist, making it virtually impossible to sustain its rich visual scope on a monthly production schedule. That problem is solved here by employing a number of different artists on the monthly, all of whom are quite good, but the eight-hundred-pound gorilla in the room is Carlo Pagulayan, a talented young find who can draw his ass off and was definitely the wise choice to have in place as the artist for the first issue (you may remember him as the primary artist on PLANET HULK, but his work here kicks his own ass). I mean, just look at some of this stuff (click on 'em to enlarge): 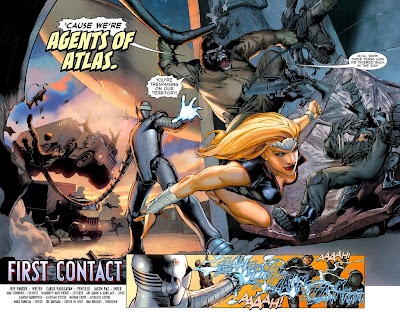 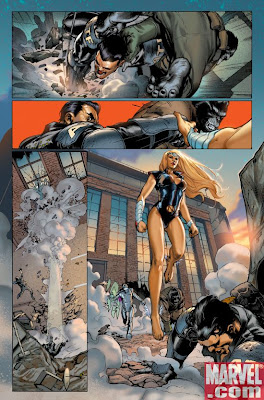 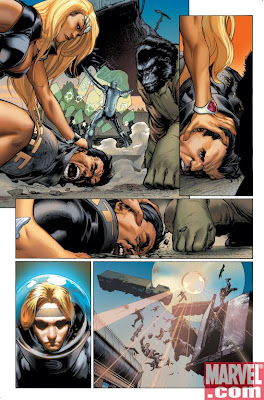 Sweet, right? Pagulayan's work can be found in the entirety of issues #1 and 5, and roughly half of issue #2, and I hope to Jolly Jack that we'll see more of him on this book. A lot more. (I like the work of Leonard Kirk and Gabriel Hardman, but there's no denying that Pagulayan leaves them in the dust.)

Bottom Line: I have not enjoyed a comics series as much as this since I went nuts for EMPOWERED during the tail end of last year, so please TRUST YER BUNCHE and check this out. HIGHLY RECOMMENDED.
Posted by Bunche (pop culture ronin) at Sunday, June 14, 2009

I'll check it out. I've been looking for a good new super-hero book lately.

...and again, Empowered was yet another, "Holy shit - really?!?" recommendation from you that I utterly enjoyed. Got 'em all now. I guess Agents of Atlas will have to be next. Thanks... I think.