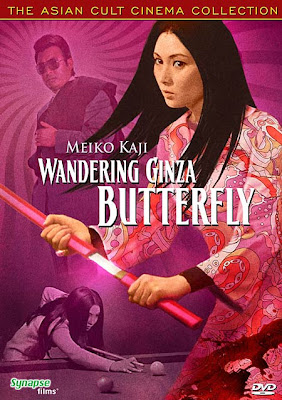 Looking at this recently released DVD's packaging, wouldn't you think it safe to assume the movie in question contained some decent bloody swordplay of the type quite common to films of this genre and era? Plus the star of the damned thing is none other than Meiko Kaji, renowned for her work in the FEMALE PRISONER SCORPION series and the superb LADY SNOWBLOOD (1973), so an expectation of violence is fully understandable. What's definitely not understandable is why this failed combination of a women's "weepie" and tepid yakuza drama even got made in the first place. It offers nothing of substance to any of the audiences it seeks to appeal to.

The plot centers on Nami (Kaji), a self-described "wanderer...a nobody," who's just gotten out of jail after serving a three-year stint. The minute she's out, she returns to Tokyo'sGinza area, a district once comparable to Times Square in its gloriously seedy days, and gets a job as a hostess at a rinky-dink bar. From there it's a dull soap opera focusing on the trials and tribulations of Nami and her co-workers, all while Nami secretly gives over a large portion of her wages in support of a mysterious woman who petitioned for the reduction of her sentence, a kind move that makes absolutely no sense when we find out the sick woman is the wife of ayakuza boss that Nami and her gang murdered. There was no indication of the woman being in any way mistreated by her husband, so why would she bother to have her husband's murderer released early? If anything, in a story like this, one would expect the wife not to rest until she had attained violent and gory revenge for her hubby's untimely demise, but no such luck here.

As that bullshit plays out, there are also subplots involving the bar's owner and her kinda/sorta but not really romance with a quasi-yakuza guy who has a heart of gold (trust me, you just won't care), another quasi-yakuza guy with a heart of gold who recruits girls to be hostesses at Nami's bar who becomes Nami's friend (also not worth caring about), and a group of evil yakuza who manage wrangle the deed to the bar away from the owner because she owes four-million yen on the place and they have suddenly become partners with the corrupt banker who loaned her the money to open the place. That plot element is accented with the other hostesses at the bar discoveringNami's status as a ex-con, and when they fuck with her about it she finally displays some of the violent attitude we'd been waiting for since scene number one. Unfortunately, that display ofbadassery is short-lived as Nami falls in line after a mere slap from her boss.

The movie lurches listlessly along in an unsuccessful attempt to get us to give a shit about any of its characters, finally reaching the make-or-break moment whenNami, earlier established to be an expert at cheating at cards and pool hustling, challenges the evil yakuza assholes to a game of pool with the deed to the bar going to the winner; if Nami loses, her uncle's pool hall and land go to the bad guys, as well as the deed to the bar. Nami wins the pool match (which is ridiculously interrupted when her opponent gets a marvelously over-acted case of the shakes and stops to shoot up some Crank), but the bad guys, being sore losers, kill the bar owner's lover in a drive-by, soNami and the other yakuza -with-a-heart-of-gold get their shit together and storm the bad guys' headquarters (where the crooks are watching a porno movie, no less). Now clad in a prim kimono,Nami , from out of nowhere, wields a sword and appears to have considerable skill with it, a bit of information that we are in no way built up for, so when the ass-whuppin' finally has the decency to occur we just can't buy it. It also doesn't help that the final fight is actually boring and blood-free, something I did not think possible when one has a room full of about twenty people, several of whom are armed with swords, knives and firearms. When all is said and done,Nami and her friend kill everybody and are almost immediately arrested as a maudlin song plays on the sound track. THE END.

There. Now you don't have to sit through this utter waste of time. The only reason I bothered with this at all was out of a fondness for Meiko Kaji — who, despite her looks and considerable genre charm, could not save this dud — and so I'd have any pertinent story background before I tackled the sequel, WANDERING GINZA BUTTERFLY: SHE-CAT GAMBLER (1972), a film that caught my attention by having my man Sonny Chiba as its co-star. After seeing the first film in the series, I have serious doubts as to whether the sequel can possibly be any good, even with Sonny in it, but it's sitting there atop my DVD player, so I'll get back to you soon with a review of that one. 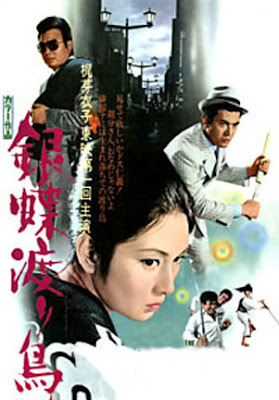 Poster from the original theatrical release: even the poster's a snoozer...
Posted by Bunche (pop culture ronin) at Monday, June 15, 2009