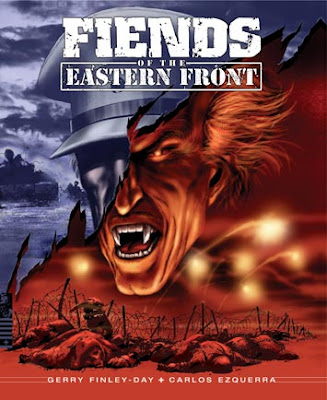 One of the more obscure but beloved series from the early years of Britain's 2000 AD sci-fi weekly comic is the 1980 FIENDS OF THE EASTERN FRONT, what I think may have been the magazine's first foray outside of sci-fi and straight into the realm of horror. I got into 2000 AD the year after this series ran and never heard of it until a few years back, when fellow Two Thou addict Chris Weston gave me the issue of THE BEST OF 2000 AD that first reprinted the series, and now it's out in a gorgeous hardcover edition.

Written by Gerry Finlay-Day (who wrote the excellent THE V.C.'s and would later co-create ROGUE TROOPER with Dave Gibbons) and drawn by Carlos Ezquerra (the signature artist and co-creator of 2000 AD mainstay STRONTIUM DOG), FIENDS OF THE EASTERN FRONT is a WWII story from the point of view of a Wermacht soldier whose company encounters the platoon of Romanian Captain Constanta, a pack of harder-than-hard warriors who bring a special kind of hatred to the opposing Russian forces. To their horror the Germans discover the Romanians are vampires, and you've never seen a more merciless military force. That's all you need to know, other than that the story was not designed to be one of Two Thou's endlessly-ongoing series like the once great but now interminable SLAINE, so the steadily mounting tension and creepiness actually reaches a satisfying conclusion. The tightly-wound writing and some of the best art in Ezquerra's career add up to this one firmly earning a rating of RECOMMENDED, but it's only available as an import so you will have to special order it from your local comics shop or consult Amazon.
Posted by Bunche (pop culture ronin) at Saturday, June 13, 2009