Very few people can be totally ruthless. It isn't easy. It takes more strength than you might believe.
-Mr. Han

There are movie bad guys and then there are fucking great movie bad guys, and even if he never did anything else in his lengthy career, Shek Kin (aka Shih Kien) will forever be remembered for his iconic role as Mr. Han in the film that I consider the Ground Zero of the 1970's chopsocky boom, ENTER THE DRAGON (1973). (There are those who cite FIVE FINGERS OF DEATH for igniting the craze by virtue of it arriving in the West first, but ENTER THE DRAGON was what really got people's attention on a huge scale, so there.) Wait a minute, you say you have no idea who the hell I'm talking about? Okay, take a look at this photo: 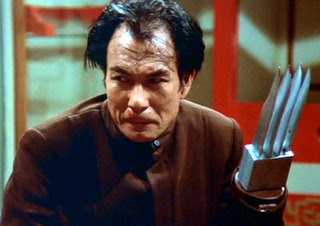 Shek Kin as the super-evil Mr. Han in the landmark ENTER THE DRAGON (1973).


Even if you've never seen ENTER THE DRAGON I'm willing to bet you've seen references to its villain with a stilted, pompous dubbed voice (courtesy of the always awesome Keye Luke) and left hand that was a modular arsenal of interchangeable implements of martial arts destruction, perhaps most notably in THE KENTUCKY FRIED MOVIE's hilarious "A Fistful of Yen" sequence.

Whatever the case, Kin's Mr. Han was a terrific over-the-top late-20th century Fu Manchu, a scary Chink stereotype who not only had the requisite island in the middle of nowhere that served as a training ground for an army of kung fu killers (whose actual purpose was never actually outlined), the guy's sense of decor looked like something out of a bad mushroom trip that peaked in a plush dim sum house somewhere in Chinatown, he had a dungeon full of junkies (also for no stated purpose), he brewed his own industrial strength heroin on the premises for worldwide distribution, had a personal and deadly cadre of bodyguards comprised of his own fiercely loyal daughters, thought nothing of dumping the heroin-addicted bodies of murdered/o.d.'ed and kidnapped women into the ocean, and was just a general blight upon society and common human decency everywhere. His only redeeming quality was his dedication to the study and promotion of martial arts excellence, and even that virtue was twisted into the service of outright evil, so how could movie fans not love the guy? Plus he was around sixty when he took on a peak-level Bruce Lee and made you believe someone so relatively old and seemingly overmatched could possibly, just possibly, come out of such a one-on-one battle alive. Sure, he cheated, what with using that claw hand, a spear, and sneaking up on Bruce in a room of nothing but mirrors, but still... 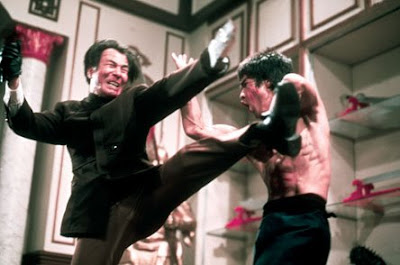 Old-assed (age sixty) Shek Kin dances the tango of death with the legendary Bruce Lee and acquits himself better than one might expect in ENTER THE DRAGON.
Posted by Bunche (pop culture ronin) at Friday, June 05, 2009