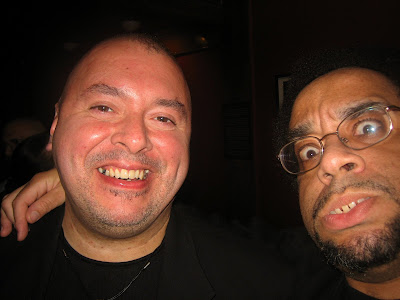 Yer Bunche and Mark "Tex" Texiera.
Last Wednesday night I was invited to attend an art opening at Manhattan's Society of Illustrators showcasing the work of Mark Texiera, a majorly talented illustrator (read "comics-biz grunt") whose artistic gifts are equaled only by his humble and lovable nature. 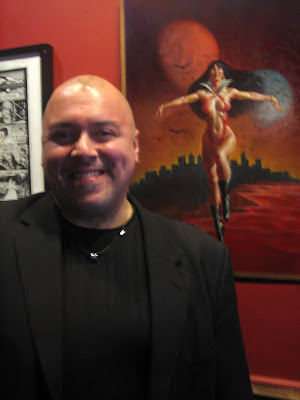 The man of the hour: Mark Texiera.

I met Tex (as he's commonly known) almost immediately upon my arrival in the Marvel Comics Bullpen nearly twenty-years ago, and at the time he was hard at work with Javier Saltares on the re-launch of GHOST RIDER. Not yet a "name" in the biz, Tex was perpetually sunny and full of fun and energy, and when the dreaded "Deadline Doom" loomed, Tex enlisted any available Bullpenners (including yours truly) to help with the finishes on some of the pages. For our efforts we were rewarded with original pages from the series, the mere thought of which makes a certain breed of comics fan drool with envy (which reminds me, I need to get mine scanned), and from the exposure he received on GHOST RIDER Tex went on to do monthly installments of WOLVERINE, and from there it was onward and upward. Moving on to the revived VAMPIRELLA, Tex proved himself one hell of a cover artist, and parlayed his flair for illustrating hot chicks with big tits in varying states of scantily-cladness into considerable notoriety and a rabid fan base.

Now that you have the basics on Tex, here's a selection of shots from the event: 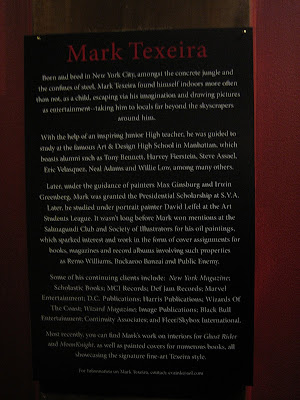 Inscribed upon an ebony plaque, the Legend of Tex hangs proudly. Verily it is a mighty saga, as bold and timeless as THE SAGA OF THE VOLSUNGS. 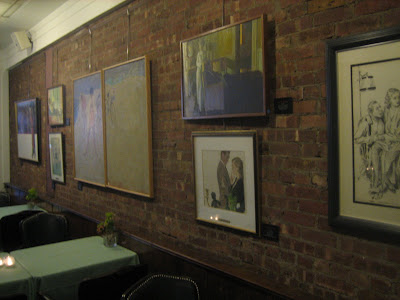 The art opening space features each and every wall being adorned with examples of the finest of the illustrator's craft, and the collection covers a wide range of styles dating back near a century, and maybe even further. 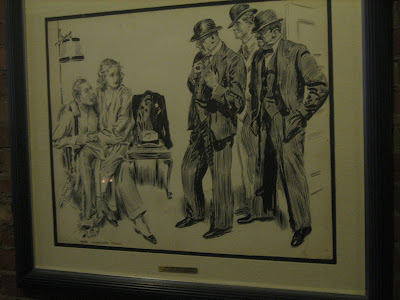 Here's a gorgeous example of old school illustration that I embarrassingly neglected to jot down the artist, title and year info for. 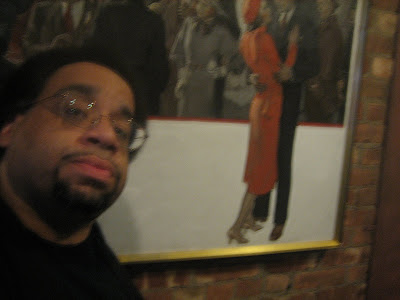 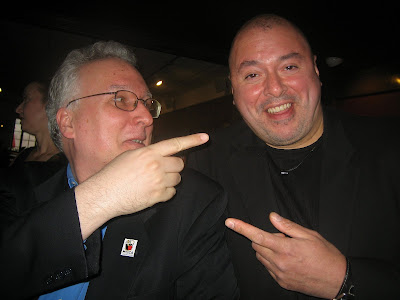 Tex with twenty-year Marvel Comics editorial mainstay Jim Salicrup. Jim's now the editor-in-chief of Papercutz, a company that publishes quality comics for kids, and when he showed me a selection of some of their upcoming projects I was rather impressed. More on that stuff when it comes out... 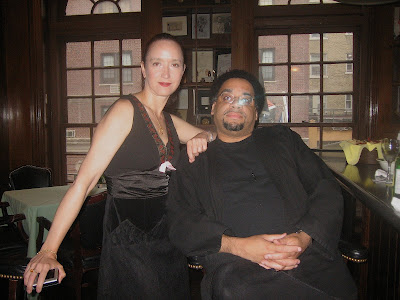 Here's me with another former Marvel colleague, Renee Witterstatter, aka "the Texas Tomato." A bit of a renaissance woman, Renee has worked in the trenches of comics-biz editorial, hobnobbed with Jackie Chan, and is currently fronting Eva Ink, a film production and publishing house where she has represented Michael Golden and Arthur Suydam, and now reps for Tex. You have not lived until you hear her speak Mandarin with her distinctive Texas twang. 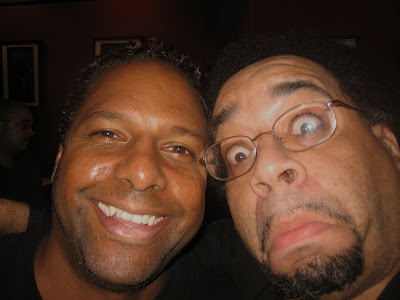 Here's me with yet another former Marvel colleague, namely Jim Hoston (another comics-biz Negro). Jim's portrait-painting skills are truly astonishing, and if you are an aspiring painter you would do well to check out his work...and then cut off your hands when you realize the sheer futility of setting up an easel near the guy. 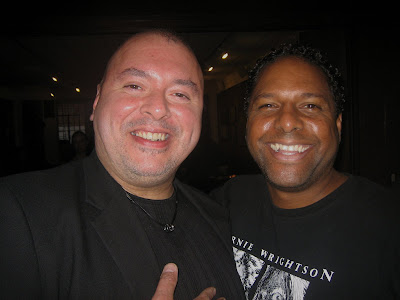 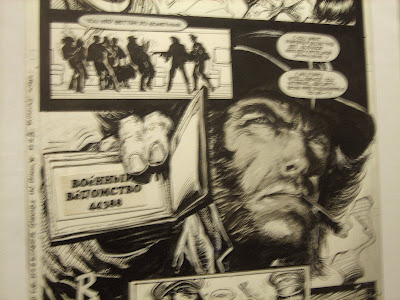 An unfortunately out-of-focus shot of one of Tex's classic WOLVERINE pages. No use of Clint Eastwood for inspiration, either. 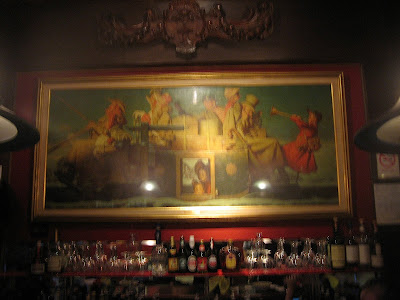 Let's face it, every bar should feature a humongous Norman Rockwell original. 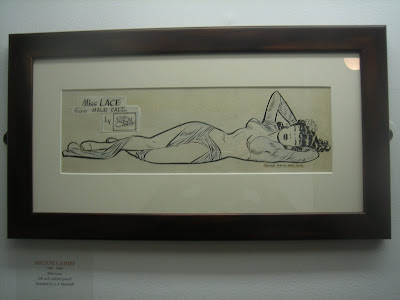 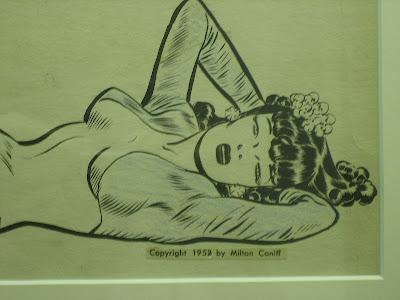 Detail of Milton Caniff's Miss Lace portrait. If this piece is ever stolen, I hereby urge the authorities to check my apartment for its whereabouts. 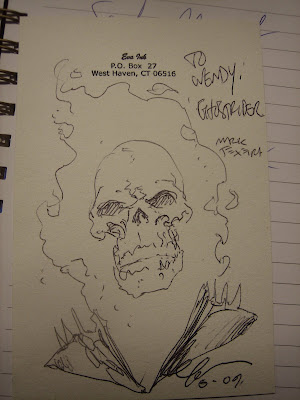 An original Ghost Rider that Tex was kind enough to draw for Jewish Warrior Princess. 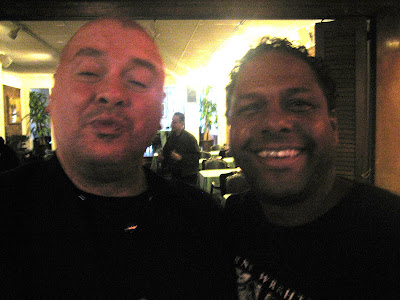 As the evening progressed, Tex got a case of "kissy face." 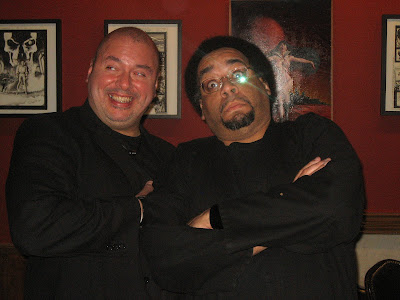 And....
he plays a mean first base for the Bronx Bombers, too!

That joke would have worked if the spellings of their names were the same, so no cigar Mr. Browski.