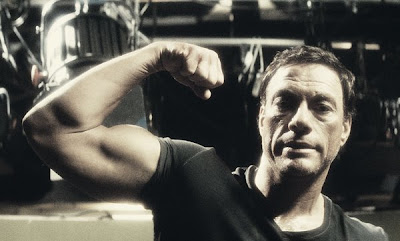 The redemption of "the Muscles from Brussels" starts here.
Having been a lifelong martial arts movie fan, it goes without saying that I've seen many of the films of one Jean-Claude Van Damme, aka "the Muscles from Brussels," and anyone who's seen even a sampling of that filmography can tell you the guy's flicks are a mixed bag at best. With his body hair-free, rippling-muscled physique, sometimes incomprehensible French accent, and pretty-boy looks during his prime (most notably in LIONHEART and DOUBLE IMPACT), Van Damme's vibe always struck me as much more homoerotic than I cared for in my martial arts heroes. 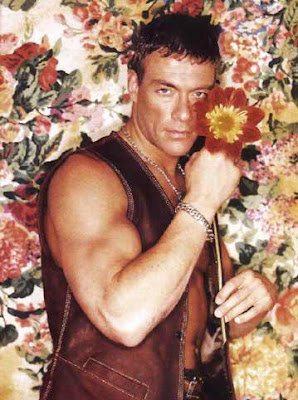 Seriously, what the fuck's going on here?
But I didn't complain too loudly because I had an on again/off again girlfriend in the late 1980's and early 1990's who dug him so much that I was guaranteed to get ridden until my dick was practically broken off at its roots if I took them to his latest film, so I'll always be grateful to him for that. Movies like BLOODSPORT (1988), KICKBOXER (1989) and TIMECOP (1994) ensured Van Damme a place on video rental shelves and cable TV programming schedules for years, but no one really took him seriously for what I perceive to be two reasons:
So Van Damme was seen by many as little more than a joke who churned out mediocre/bad movie after mediocre/bad movie, with some wags even mockingly referring to him as "Jean-Claude VD" while likening his movies to sexually-transmitted diseases. (No, I'm not making that up.) I personally gave up on his movies long ago (I threw in the towel after THE QUEST, which came out about two years after that long-ago girlfriend's departure), but about a year ago I heard the first rumblings of the guy having made a movie that would cause audiences and critics to re-think their opinions of the Belgian Beefcake, and I was admittedly intrigued. That film turned out to be JCVD and it shocked the shit out of me for a number of reasons, chief among which is that Jean-Claude Van Damme can really act, and that his earlier perception as wooden was due to him being stuck speaking English in his movies. Lemme tell ya, when the guy's allowed to speak in his native tongue, as he is here, the results are startling (I mean that as heartfelt praise).

JCVD is not in any way an action movie, but is instead hinged upon the interesting conceit of Van Damme playing himself, now an actor who has fallen from grace thanks to an inevitable waning in popularity and the drug scandals that kept him in the tabloids. As his career is steadily sliding down the toilet, he must also contend with a bitter child custody battle, and his odds of winning dwindle as he's portrayed by his wife's attorney as an unfit parent for allegedly exposing his daughter to his violent movies, and his daughter's own statement of wanting to live with her mom so she won't be made fun of anymore by her friends and schoolmates. Looking weary and beleaguered beyond his then-forty-seven years, a defeated Van Damme goes home to Brussels to regroup, but as he goes to accept a much-needed cash transfer at a local bank, he unwittingly walks in on an armed bank robbery and hostage situation in progress. Things go from bad to worse as the robbers fix things so it looks to observers like Van Damme himself is responsible for the whole mess, and the situation escalates into a taut no-win scenario where the internationally famous action icon is utterly at the mercy of a trio of gun-wielding criminals, and his every action (or inaction) holds the fate of the innocent hostages in the deadly balance.

As the story unfolds, Van Damme has several moments of soul-searching and introspection that really allow him to show his range and sensitivity, and I defy you not to be moved, especially during a reverie to himself that briefly takes him out of the held-at-gunpoint drama so he can address the audience directly. The poignancy of his words and the hang-dog resignation in his delivery are amazing, and the words are lent a great deal of lyricism by being spoken in silk-smooth French.

The whole film is terrific from start to finish and is in every way the antithesis to Van Damme's earlier "action figure cinema" résumé, with an ending that's refreshingly realistic and sobering, especially if you're aware of the man's career and its pitfalls over the last decade or so. Bravo, Jean-Claude. Seriously, man. Bravo. HIGHLY RECOMMENDED.
Posted by Bunche (pop culture ronin) at Friday, June 12, 2009

I've been hearing fantastic things about this movie, but I've also heard that you need to view the subtitled version and not the dubbed one to truly enjoy how good it is. I get the impression that the dubbing is both terrible and distracting.

That's the only thing that's held me back from seeing it, because I think the verion on the Instant Watch option in Netflix is dubbed, which is how I had planned to view it until people warned me off that version.

I didn't mention that there are dubbed and subbed versions because I'm one of those folks who goes straight for the subtitles. I prefer to see performaces in their native language so you can see what the actors were going for, as opposed to the often terrible voice-overs provided by American distributors. And have you ever seen the dubbed version of MAD MAX? Why it was deemed necessary to dub a film already in English is beyond me, but did they have to include as one of the dubbers the guy why voiced Racer X on the old SPRRED RACER cartoon? That voice took me right out of the film.

I think I saw the dubbed "Mad Max" once. It boggled my mind. Particularly since I saw "Road Warrior" before I watched "Mad Max." I'd be more inclineed to dubb a heavy Cockney accent from the UK than I would an Aussie accent...

Like you, I'm subtitles all they way man...well, except for Ultraman...the dubbing works there for me. ;-)