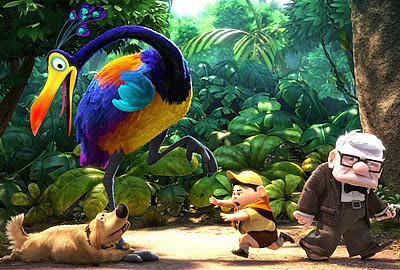 Before I get to the review proper, let me take a brief bit of your time to remind you that just because a film is animated that doesn't automatically make the film in question a "kiddie" movie. Such is the case with UP, and that's not to say that the material in the movie is in any way unsuitable for younger audiences, but rather that the themes explored in it have a lot to do with an understanding of the human experience that one acquires with a certain level of age and what one has gone through in life (I found RATATOUILLE to be much the same in this respect). Thus I suggest that before you take your kids to see UP you should carefully assess whether your youngster will get fidgety and restless during a film that doesn't get lively enough to rivet a child's interest until about two thirds of the way through its running time. The showing of UP that I attended was marred by several families who'd brought their broods to see it, and most of the children in question ranged from babe-in-arms infancy to about five years old, and these kids spent the entire film loudly testing their newly-realized vocal capacities by screaming, shrieking, making random sounds repeated over and over again at top volume, crying, and just about every noise kids can make. And you know it's bad when the slightly older kids in attendance said out loud that there were "too many babies and little kids" in the audience and that they were ruining it for everyone else. But at no time during this agony did I hold the kids responsible; it's their shitheaded parents who don't get that when you have children you have to accept that it'll most likely be several years before you can actually see a movie in the theater again, instead waiting for DVD or cable and seeing flicks at home where you they can attend to the needs of their little ones without fucking it up for the rest of the audience, people who also paid the exorbitant admission price and expect to enjoy the movie they paid to see.

Anyway, enough with my cautionary rantings.

UP, the tenth of Pixar's feature films, is simply excellent in every way it's possible for a film to be excellent, and its 3-D element is not necessary at all in order for the viewer to enjoy it. I've found that the majority of 3-D movies use that effect as a gimmick to disguise a film's plot deficiencies, MONSTERS VS ALIENS and BEOWULF immediately leaping to mind as examples, but UP stands on a very strong story foundation so no such fancy gewgaws or flash are needed in the least.

UP tells the story of Carl Fredricksen (voiced by Edward Asner to Oscar-worthy effect), an old man struggling with the crushing void left in his life following the death of his beloved wife, Ellie. The pair bonded during childhood over a mutual love of the promise of adventure in exotic places and hero worship of a famous explorer named Charles Muntz (Christopher Plummer), and from that inauspicious meeting we are shown the evolution of their life together, going from youthful innocence through marriage, their shared dreams (some of which tragically never come to pass), and Elie's death, all of which is portrayed in a moving sequence taking up about ten minutes of screen time and featuring more honest. genuine emotion than any film I've seen in years. If you don't care about Carl Fredricksen after what's witnessed during that sequence, you have simply no heart.

Cantankerous and lost without Ellie and facing court-ordered eviction from his (and just as importantly, Ellie's) home for a "life" at the Shady Oaks retirement community, Carl rigs up the house with a massive amount of helium balloons (presumably snagged from his job as a balloon vendor at a zoo, where he worked with his wife who served as a tour guide) and sets off on an airborne course to Paradise Falls in South America, the site where his (and his wife's) explorer idol vanished while on a quest to prove the existence of a rare flightless bird. The goal is to fulfill Ellie's wish of having her home on the peak of Paradise Falls, and while on the way Carl finds himself saddled with an unwanted and annoying traveling companion in the form of Russell (Jordan Nagai), an earnest but irritating scout in search of his "helping the elderly" patch, an achievement that will advance him to senior rank. As the two share a journey that smacks more than a little of the now quaint adventures scribed by Jules Verne, both unlikely heroes have their individual mettle tested and neither comes up wanting, faced with befriending and protecting the aforementioned rare bird (dubbed "Kevin" by Russell) and encountering a pack of dogs equipped with collars that allow them to speak. Among the dogs is Dug (Bob Peterson), the embodiment of all that is sweet and endearing in Man's Best Friend, and he soon proves to be another misfit who casts his lot with the two humans and the bird. More goes on from that point in the narrative — a LOT more — but I'll leave those details for you to discover for yourself; the bottom line is that I hold UP in the highest of estimation and urge you very strongly to see it.

What surprised me most about UP is how the marketing for it gives you no clue whatsoever as to its themes and tone, making it look like a cute little kiddie picture when it is in fact a moving character study of isolated and lonely characters who touchingly find one another and find themselves all the better for that mutual discovery. The film's examination of loneliness and the overcoming of that loneliness, both situational and emotional, touched me deeply and I found myself openly weeping at certain points in the story. One of my co-workers, a hardcore Disney and Pixar fan, actually found the film too sad to be enjoyable and cried from start to finish, but she's a sensitive sort who prefers her cartoons within a certain set of established animation storytelling parameters, and what she got from UP was in no way what she went in expecting.

I found UP's deep emotional resonance to be not only refreshing but also quite cathartic, and when I left the theater my mind kept returning to it and mulling it over for several hours, and after very careful consideration I find UP placing as third in my ranking of favorite Pixar movies (number one being RATATOUILLE, with THE INCREDIBLES an extremely close second), and as the years go by I would not be surprised to see it move up even higher. I'm a very emotional guy and understand what this movie was talking about all too well, so when a movie speaks to me like this, I listen. UP speaks with a subtlety and eloquence missing from the vast majority of Hollywood's output, and the fact that it communicates as it does through the animated medium only makes it all the more precious. Don't miss it.
Posted by Bunche (pop culture ronin) at Tuesday, June 02, 2009

You've really sold me on UP, hopefully see it as soon as it comes out.

Steve, you have found your calling. Your reviews of films, comics and other popular forms of entainment both enlighten and inform. Five stars. I also enjoyed reading your commentary on the audience. You tell it like it is with eloquence and style. Encore!

I'm with Rick. Although I've disagreed with you occasionally (cf. The Crow, among others), your reviews are smart, insightful, eloquent, often hilarious, and very frequently dead-on. You are by far my most respected film-criticism source, and I'm glad to have had you change my mind about such films as Kung Fu Panda, Tropic Thunder and the recent Star Trek, all of which I had planned to pass on until I saw your reviews.

As for Up, it's already on my list. We're gonna see it this weekend.

I would have seen it eventually anyway, but you've sold me, too, Bunche.

And as far as the taking kids to movies thing, I'm in total agreement with you. My little girl is almost four and I STILL am not ready to bring her into a movie theater.

thank you for that lovely review.. as a parent .. i'll wait til it comes out on DVD

Saw this the other night and we loved it despite being emotionally WRECKED by the end. We were taking a break from dealing with our cat's health crisis (embolism in her leg, three days at the vet in a panic culminating in a cancer diagnosis) and just needed some light entertainment while the little one rested at home. I was reluctant but forced myself to go, and of course the short film beforehand got it all started with images of baby kittens and storks in the clouds.

And then it went downhill from there.

Cried nearly through the whole damn thing. Through the ten minute life montage, the breaking of the mailbox, the launching of the house, the photo album, the grape soda cap, the dog... and goddamnit it, the bird hurts her leg... massive waterworks! Cried at the end, cried in the parking lot... crying right now thinking about it in fact.

But still, an awesome film.

I look forward to seeing it again... just not this week.