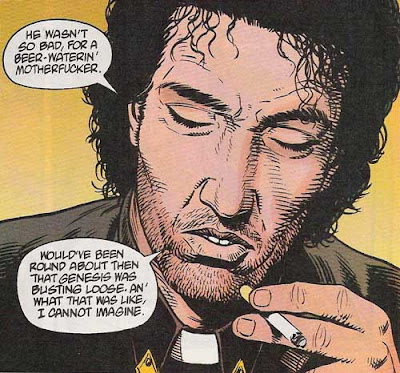 Wednesday night's signing by Steve Dillon — he of PREACHER and THE PUNISHER fame — went found the man signing individual comics issues and collected editions while practically giving away sketches at a mere $15 a pop for charity. 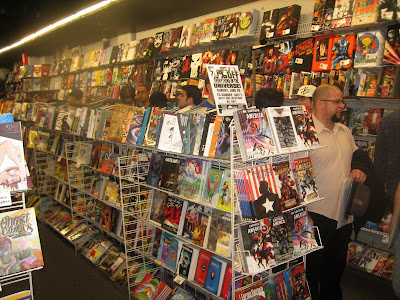 The fans await an audience with Steve.

I'd guesstimate about slightly over thirty people showed up to wait on line for signatures and sketches, and while it was totally cool of Steve to do sketches for cheap, everyone and their mother wanted one, so instead of asking people if they wanted a sketch or just signatures, the system instead was handled on a person-by-person basis. Not the most efficient way to handle such things because it takes mere moments for signatures while sketches can vary greatly in length of execution, thus dooming the signature-seekers to wait for immense lengths of time when they could have breezed in and out, but I'm at a loss for coming up with a better solution. 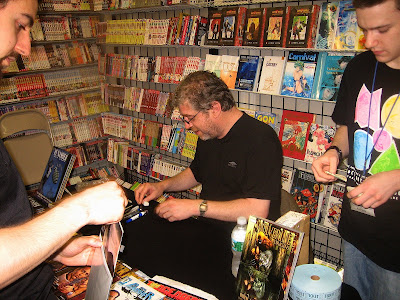 Steve sets up.
I witnessed a number of people wait on the line and finally give up and leave (including my pal Suzi, who bought six of the collected PREACHER editions), and let's face it, a comics store book-signing is not a place where artists usually do sketches. Sketches are almost always a convention thing and are often regulated by the artist's manager, or else it's up to the artist to handle it as they see fit; my pal Amanda makes a point of having those who want signatures come up and get their stuff signed first so she can get down to the commission pieces once that bit of business is taken care of, fielding the signing of later individual items as they come while she's drawing. But that's what works for her.

Anyway, when I finally made it up to Steve we chatted briefly as he signed my books and he said he might be making it to my birthday shindig this Saturday, so it was all good. As I picked up my signed items and bade him farewell as he resumed the sketching, I made my way out to meet Suzi uptown and realized I had been on line for two and a half hours, during which time the fans remained well-behaved and polite, unlike some similar scenarios I've seen at conventions. My flat feet screamed as I made my way over to Penn Station and the train to the Upper West Side. But who gives a fuck about my feet? The awesome thing here is that Steve is such a trooper, he kindly sketched and signed for everyone who remained on the line, staying well past his scheduled two-hour appearance and making sure his fans were happy and satisfied. There are some "big" names in the comics-biz who regularly demonstrate what amounts to open contempt for the people who made them famous and often wealthy, and I'm glad to report that Steve Dillon is not and never will be one of them. 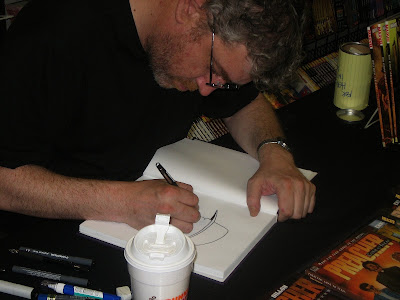 Steve draws the Saint of Killers for a fan.
Oh, before I forget to mention them, you just have to give it up For Jim Hanley's Universe staffer
Russel (with only one "l") and his six-week-old daughter, the adorable little Dinah. 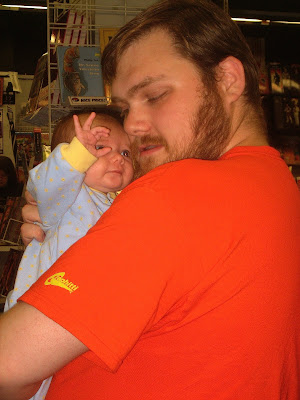 Tiny Dinah and her big, bearded geek of a dad.
Yeah, you guessed it: her geeky daddy named her after the Black Canary. 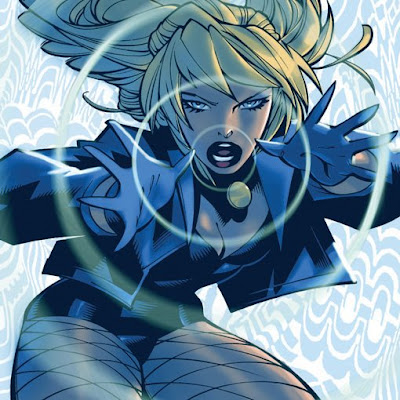 The Black Canary, aka Dinah Lance.

Once I made my way uptown I met up with Suzi at the House of Brews on West 51st Street, where she was holding court with a bunch of computer folks, some of whom she worked with and others she hoped to scope out as possible recruits to her legion of technocrats. They may have been heavy-duty computer types, but us geeks recognize one another despite whichever tribe we represent for, and in no time we were having a blast. Suzi's one of my favorite human beings on the planet, so I guess I should not have been surprised by the quality of company she keeps. And among this amiable rabble was one Charles Novick, a sweet guy who turned out to be the designer of the Stray Cats' first U.S. album, "Built for Speed" (1982). 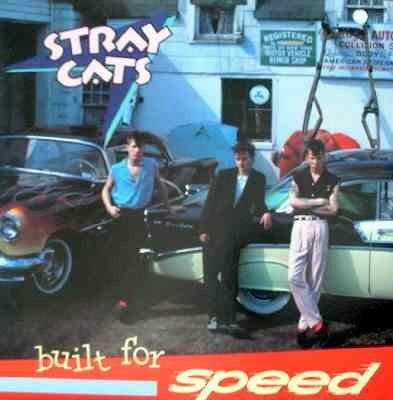 We got on like a house on fire, and I hope to see him also at my thing on Saturday. Just goes to show that you never know who'll you meet in the wacky ol' Big Apple. 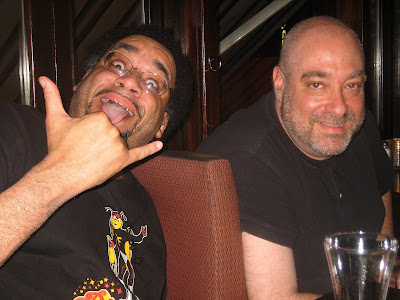