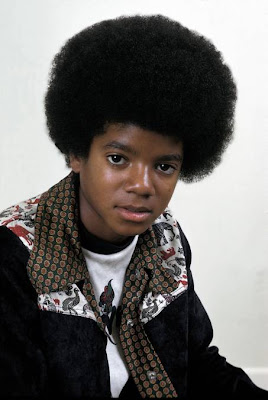 Michael Jackson, circa the early 1970's, or waaaay back when he was still black. No, really. That's Michael!

Yes, you read that right: Michael Jackson, "the King of Pop," is allegedly dead at age 50, apparently due to a cardiac arrest. I'll be back with a piece on Michael at some point tomorrow, but I have to find out more about this. TMZ.com is reporting that Michael's flat-out dead, but every other source I've found says he's had a heart attack and is in a coma. TO BE CONTINUED
Posted by Bunche (pop culture ronin) at Thursday, June 25, 2009

Poor guy. I think he deserved better than what the last ten years have given him.

Isn't it crazy! I can't imagine how massive the crowd around the hospital will have grown by morning. "Thriller" was the very first album I bought. Wow.