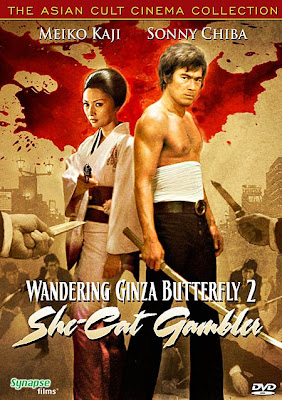 Meiko Kaji's back, and this time she's black!!! No, wait... It must be the twelve-pack of Bud I just poured down my throat...

Okay, so I endured the utter waste of time that was WANDERING GINZA BUTTERFLY and now I've seen its sequel, which I watched solely because it features my man Sonny Chiba as a stuttering, mostly comedic, low level pimp with a heart of gold named Ryuji (or Ryu for short).

Sonny Chiba, caught with his pants down as the hapless Ryuji.

Hell, I'd sit through anything with Sonny in it — MESSAGE FROM SPACE, anyone? — and I think the filmmakers must have realized his presence couldn't hurt. In fact, this movie feels like the filmmakers said, "Well, WANDERING GINZA BUTTERFLY was absolute ass, so let's make a sequel and forget all about the boring shit that preceded it. Oh, and let's have the main character retain the same name as before and hope audiences are too fucked-up on sake to notice that Meiko's pretty much playing the same part she did in the LADY SNOWBLOOD flicks!" (I know the LADY SNOWBLOOD movies hadn't happened yet, but you know what I'm getting at.)

Completely ignoring the events of the first film and the fact that our heroine got busted after killing a roomful of crooks and most likely went to prison on a multiple murder rap, this time out wandering gambler Nami (Meiko Kaji) is a proper, kimono-clad type common to these movies, and she gets things off to a ninkyo (chivalrous) start by rescuing an innocent girl who's been sold to the some yakuza assholes to pay off her father's hefty gambling debts. After winning the girl's freedom in a card game, Nami sets about fulfilling the film's main point: she's looking for — stop me if you've heard this one before — a gambler named Hoshiden who long ago murdered her father before her very eyes (as a child her dad hauled her along to shady gambling houses, so Nami's been dealing with such shit since her single-digits) and she wants to render the guy as dead as her pops.

That's pretty much the whole movie in a nutshell and as movies of this type go it's slightly better than passable, an assessment I make only because Sonny Chiba's on hand to bring the fun as he nearly always does. I mean, how can you not love the moment where Ryuji and Nami meet during a yakuza-thrown card game in which Ryuji's losing (badly), so he attempts to cop a cheap feel off of Nami, claiming that touching a woman's breasts gives him good luck? (I've gotta remember that one!)

Ryuji homes in on the dairies.

Chiba also comes through in fine form when it's time to stop clowning around and hand out helpings of sharp-edged death to yakuza scumbags, thus simultaneously aiding his pal Nami and killing off the assholes who usurped his pimpin' business. Be it with fists and feet, or while brandishing a katana with stunning effortlessness and utter command of the situation, I love watching Chiba work, and Sonny fans will not be disappointed when the film finally gives us the kind of action that should have been in evidence from start to finish and not just at the very end.

Rule #1 in Japanese movies of the 1970's: if Sonny Chiba's in the same room as you, run like a motherfucker!
But what of the film's headliner, Meiko Kaji? She's good here, but this version of Nami is kind of a dry run for her later roles, and if you've seen her in LADY SNOWBLOOD or the FEMALE PRISONER SCORPION series you won't find anything here that'll knock you out.

In summation: WANDERING GINZA BUTTERFLY 2 is an okay time-passer and definitely an improvement on its predecessor, but your life can continue unhindered if you decide to give it a miss.
Posted by Bunche (pop culture ronin) at Friday, June 19, 2009