"THE HORROR...THE HORROR...": AN UNEXPECTED WINDFALL OF ABSOLUTE SHITE AND A MAJOR STEAMER OF A DVD BOXED SET

When I returned home from work on Monday night, I was surprised to discover a package of assorted crap sent to me by my old friend Bill Wrigley and comprised of stuff he simply needed to expunge from his home. Among other items there were DVDs of THE BEST OF GLOW ("Gorgeous Ladies Of Wrestling") and Gerard (DEEP THROAT and THE DEVIL IN MISS JONES) Damiano's infamous misfire, LET MY PUPPETS COME (it's exactly what it sounds like), and a boxed set of an audio tape course on how to seduce women, but the crown jewel atop this pile of stink-nuggets was Rhino Video's 2-disc complete run of the unbelievably awful PINK LADY...AND JEFF. "And just what," I hear you ask, "is PINK LADY...AND JEFF?" Let's set the Wayback Machine to the Spring of 1980, a period when the once-mighty juggernaut that was Disco was lurching toward its long-awaited death...

During those heady days, the NBC television network had steadily gained a reputation for foisting an avalanche of truly heinous programming upon an unsuspecting (and probably coked-up) America, and some genius at the network came up with the brilliant idea of giving a primetime variety show to the superstar Japanese pop music duo Pink Lady. Perhaps the quintessential example of the plastic Japanese pop group, Pink Lady was comprised of Mie and Kei, a pair of treacly-cute girls who sang catchy tunes and served as pitchwomen for a myriad of products, and I suppose they may have seemed a sure thing for a network hit in the years when brainless and generally horrid disco dominated the American airwaves. When the girls arrived in the States for their big network show, it was discovered that, to put it kindly, they were not what one would call fluent in English, thus necessitating the presence of an American to keep things moving and serve as their "interpreter," theoretically ensuring that wacky comedy gold could be spun from the straw the network ended up with, and that thankless task fell to standup comic Jeff Altman. 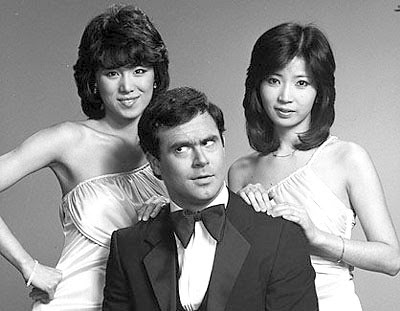 Harbingers of the simultaneous deaths of disco and the American variety show: Pink Lady and Jeff Altman.

Much was made of the girls' feeble grasp of the language and the inevitable clash of cultures, and while such elements have been fodder for humor since Day One, the series was about as funny as a burning and occupied children's AIDS ward, and when the gags weren't unceremoniously bombing there were musical performances in which Mei and Kei had to sing in English that they'd memorized but could not comprehend. Assorted guest stars, musical and otherwise, failed to add anything to mix and the show was swiftly canceled, running from March 1 through April 4, 1980 before vanishing into TV immortality as one what is widely considered to be one of the worst shows in American television history, if not the rock bottom worst of all time.

And now I own this cathode ray Chernobyl, and I cannot wait to sit my friends and family through its rampaging terribleness. 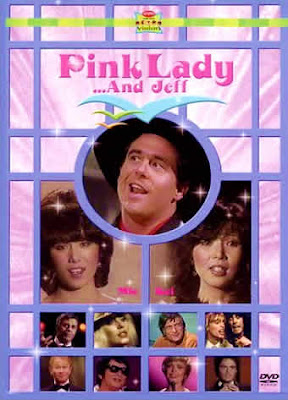 The PINK LADY...AND JEFF boxed set: apparently it was totally legal to sell this despite the strict regulation of hazardous materials.
Posted by Bunche (pop culture ronin) at Thursday, June 04, 2009

I own a copy of LET MY PUPPETS COME also... It's exactly what you think is. Stick with MEET THE FEEBLES...

Now all you need is the complete series dvd's of SUPERTRAIN and THE BIG SHOW and you'll have all of NBC's attempts to lobotomize the American public through their televisions.

I just want to point out two important facts:

1: Pei from Pink Lady went on to be one of the singers for Animetal Lady, a speed-metal band which bases its repertoire entirely on covers of anime themesongs.

I get the feeling that the guy who dumped all that stuff was a real charmer.

Pink Lady and Jeff is also credited with killing the variety show on American TV.