Now that the allegedly unintentionally druggy H.R. PUFNSTSUF kiddie show is slated for a big-screen version, I say fuck doing it as a straight-up kid's flick and instead make it an R-rated straight-up stoner-oriented comedy. It might not kill at the box office, but if it were cleverly scripted, genuinely funny and ideal for repeat viewing with a bong close at hand, I'd wager it would have legs as a DVD perennial. With that in mind I send you off to what such a project could be like, namely MR. SHOW's "The Altered State of Druggachusetts," a dead-on lampoon of the early works of Sid & Marty Kroft. 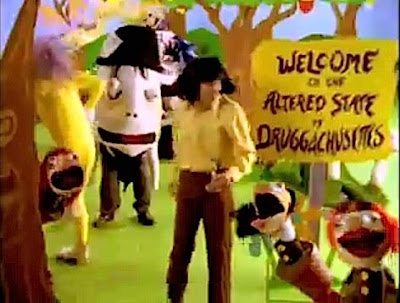 "The Altered State of Druggachusetts."
For the last four decades the Krofts have sworn up and down that they never intended H.R. PUFNSTUF (1969), THE BUGALOOS (1970) or the even totally tripped-out LIDSVILLE (1971) to be geared to a chemically-altered sensibility, and I actually believe them, but I also believe in no uncertain terms that they unknowingly tapped into the lysergic sensibility of those times. Whatever the case may be, those shows stand as borderline-disturbing examples of what happens when children's programming collides head-on with unbridled psychedelia.
Posted by Bunche (pop culture ronin) at Saturday, June 06, 2009

...not to mention closet homoerotica and disturbing currents of pedophilia...

I remember seeing some extremely trippy, I-think-i'm-having-a-flashback style kids TV when I visited Tokyo about a decade ago..