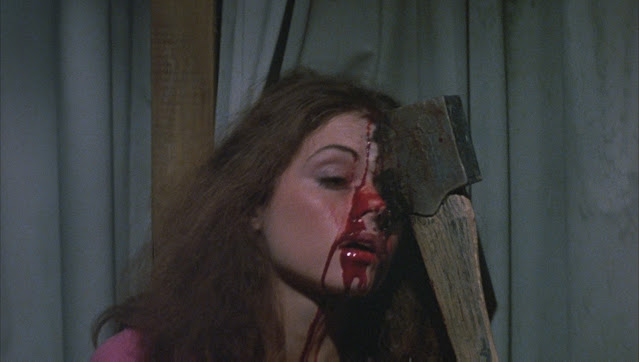 She axed for it. (I'll show myself out.)

In the summer of 1980, eager movie fans were foaming at the mouth in anticipation of THE EMPIRE STRIKES BACK, the first of the STAR WARS sequels, so when a humble low-budget gore flick quietly landed in the nation’s theaters, pretty much no one expected it to become one of that year’s most lucrative box office draws.

Blatantly biting off of John Carpenter’s seminal HALLOWEEN(1978), FRIDAY THE 13th was made on the cheap and totally eschewed the artistry that made HALLOWEEN the classic that it is, as well as not giving a squirt of rat’s piss if it were actually scary or not (it isn’t). No, this film’s sole raison d’etre was concerned with absolutely nothing but turning the screen into a savage charnel house, accented with titties. In other words, the perfect brainless sex ‘n’ violence exploitationer that the youth audience would devour as celluloid fast food. But what no one foresaw was the film reaping so much money that sequels were inevitable, unintentionally creating a cheapjack franchise that ended up as an iconic horror cinema institution. Most of the films in the series were outright shit, but they were the standard-bearer of what became known as the “slasher” film, a genre that became emblematic of its ‘80’s moment in history.

I was fifteen when FRIDAY THE 13th arrived, and at the time all of us who were about to enter high school at the end of that summer saw gaining entrance to so outrageously gory of movie (for mainstream fare) as something of a rite of passage as we worked our often-confused way through coming of age during the Reagan era and the Cold War, a period in which ongoing fear of a nuclear conflagration was very real indeed. Horror movies were a means for coping, and though I had been a dyed-in-the-wool “horror kid” since age four, I had up to that point mostly been raised on content suitable for broadcast television, with the notable exceptions being DAWN OF THE DEAD (1978) and ALIEN (1978), so I was in no way expecting something so extreme to run outside of a grindhouse. This was the kind of shit that could arouse the ire of censors and parental watchdogs of decency (which in some circles it did), but who gave a fuck what those squares thought? Us kids wanted to see what the big deal was, so we went in droves.

I had already seen HALLOWEEN, albeit in a version censored for broadcast on NBC during primetime, as well as proto-slasher PSYCHO (1960), so I was familiar with the basic tropes as set forth in films of genuine quality and merit, and my serious gore cherry had been popped by DAWN OF THE DEAD, but DAWN’s then-over-the-top gore, while quite shocking, worked perfectly within the apocalyptic context that it presented. It even offset a lot of its visceral nightmare with a blackly comedic sense of humor. FRIDAY THE 13th, on the other hand, served up a bunch of ciphers that barely qualified as characters, and they were there to be chopped up and otherwise massacred for our amusement. At no point do we give a shit about any of them. It’s all about Tom Savini’s groundbreaking gore effects, baby. This sure as shit was Kurosawa by any stretch of the imagination.

When my peers began seeing the movie and disseminating early reports on its content, many, including myself, were quite skeptical. It reminded me of all the times during elementary school when kids would describe details of “grownup” movies or TV shows during recess, and more often than not those details were over-inflated or straight-up lies in order to garner attention. (My go-to example of this phenomenon was a 4th grade schoolyard incident the day after a network TV broadcast of ONCE UPON A MATTRESS, a musical retelling of THE PRINCESS AND THE PEA. Some kid claimed that it climaxed with a lot of farcical running around that saw the princess, who was reportedly hugely pregnant, having a bunch of mattress topple onto her. The kid swore up and down that the pressure of the mattresses forced the baby to comically be fired from her nethers, complete with umbilical chord. Even at that tender age I knew bullshit when I smelled it, and from then on I looked askance at my peers’ “I swear to god this happens” tall tales.) Surely a movie showcasing nothing but repeated stabbings, mutilation, and dismemberment never be allowed to play at Westport’s classy and genteel Fine Arts 1 & 2…

The initial reports all emphasized the violence and gore while making no mention whatsoever of the plot. None of my peers gave a damn about plot or characterization, nor did anyone else in America’s moviegoing throng, apparently, and many times I heard the film earnestly assessed as “the scariest movie ever made.” (Which was also how they described POLTERGEIST a couple of years later.) When I finally saw the film for myself, I found the gore fun, but felt the film lacked in every other aspect. There’s no suspense, none of the characters inspire interest of caring, the script is awful the direction and cinematography are flat and uninspired, the jump scares swiftly become tedious, and when the killer finally revealed, it’s in no way believable because the person in question would not have had the physical strength to perform some of the feats of brute strength depicted. In short, it’s a mindless spook show and nothing else.

But lack of a brain behind a film seldom stopped a movie from being a hit, so FRIDAY THE 13th became the genre’s textbook template for the decade, with its innumerable knockoffs displaying even less creativity and artistry. Yes, there were some decent and entertaining slasher, but for the most part the genre was a cul de sac. That said, I freely admit to being a fan of this series purely because I’m amused by their escalating idiocy. The filmmakers are fully aware of exactly what they are churning out, and the audience is only too happy to turn up for the latest serving of blood sausage. It’s crap and we all know it, and sometimes one is just in the mood for junk food. 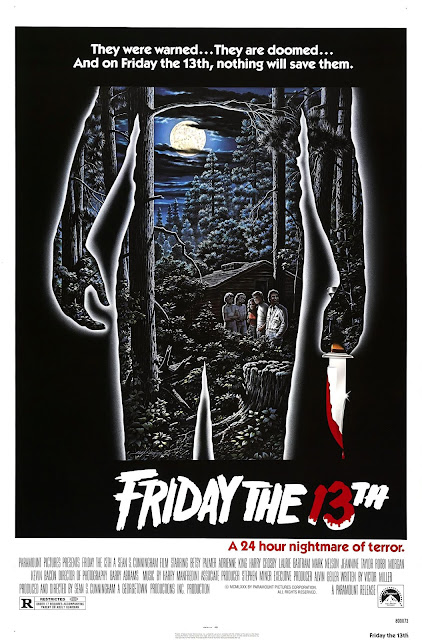