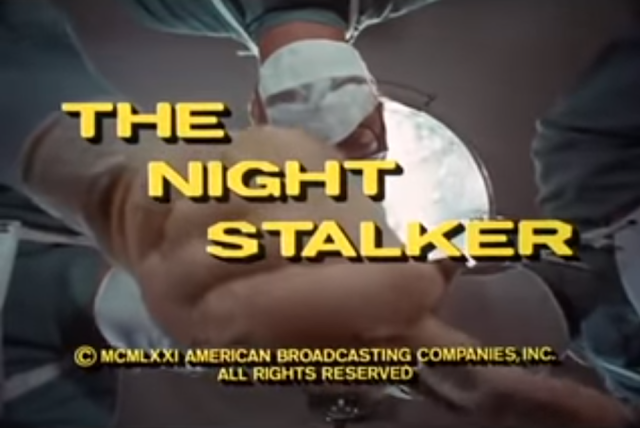 When an autopsy turns weird...

"This is the story behind one of the greatest manhunts in history. Maybe you read about it — or what they let you read about it — probably as some minor item buried somewhere on a back page, however what happened in that city between May 16th and May 28th of this year was so incredible that to this day the facts have been suppressed in a massive effort to save certain political careers from disaster, and law enforcement officials from embarrassment. This will be the last time I will ever discuss these events with anyone, so when you have finished this bizarre account, judge for yourself its believability, and then try to tell yourself, wherever you may be, 'It couldn't happen here...'" -Carl Kolchak, dictating to his portable tape recorder in a fleabag motel

In 1972 Las Vegas, a series of bizarre murders of young women takes place, with all of the corpses completely drained of blood. As Carl Kolchak (Darren McGavin), an investigative newspaper reporter for the Daily News, formerly of some NYC paper, who is considered something of a nuisance by the police and others handling the stories he covers,  follows the clues, the weirdness escalates as a local hospital's entire supply of blood is stolen, regardless of blood type and RH factor. More information is garnered at a meeting with local politicians and police officials, including the fact that the bite wounds on the victims' necks were found to contain human saliva. The coroner in attendance, after being asked by Kolchak, verifies that there are historical instances of deranged individuals believing that they are vampires and feasting upon the blood of victims, but that idea is scoffed at by the police. The coroner, on the other hand, advises them not to so readily dismiss Kolchak's theory out of hand. That said, all reporters present are ordered by the mayor to keep a lid on "this vampire stuff" and make no mention of the women having been drained of blood, and Kolchak is in no uncertain terms told to stay clear of the case, as the mayor plans to speak with his boss and have someone else, anyone else, assigned for coverage. 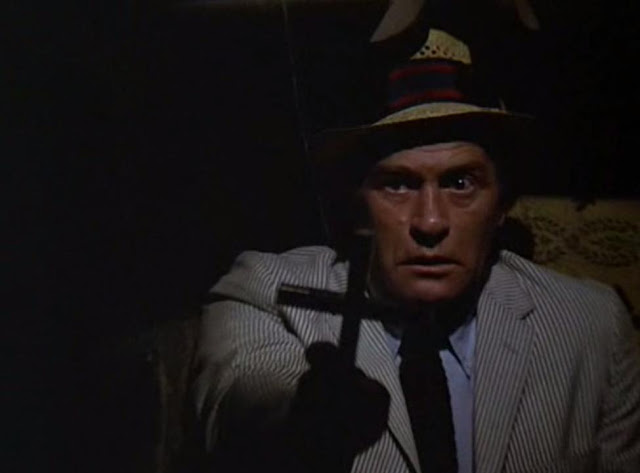 Investigative reporter Carl KOlchak (Darren McGavin): Soon to be the idol of 1970's monster kids.
Kolchak forges ahead with his investigation anyway, despite his boss angrily telling him "No vampire stories," but the killer strikes again, only this time with a witness, but having a police sketch of his face adorning the front page does not deter the ravening suckface. His next victim is cornered alone, but she releases a large attack dog upon her assailant, only for him to grab the animal, break its neck, and cast its lifeless carcass to the ground before making short work of its owner. 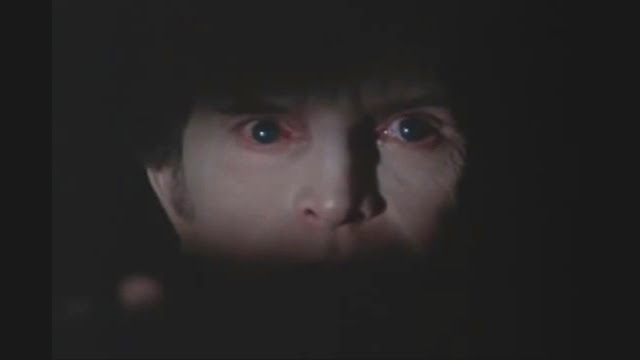 A hungry member of the undead stalks Sin City.

At this point, Kolchak thinks the murderer is simply a psychopath, but his casino-worker girlfriend (Carol Lynley) gives him a book entitled "Everything You Ever Wanted to Know About Vampires But Were Afraid to Ask," that he pores over for facts on the lore the nosferatu. It's a timely gift, as Kolchak hears a police report of a violent brawl at another of the city's hospitals and rushes to the scene to bear witness. With his own eyes Kolchak watches as the vampire makes off with another haul of blood while tossing around hospital staff and police like they were rag dolls. The killer manages to escape with ease, even while the cops open fire on him, and Kolchak snaps photos of the wild melee.

With such proof, the lid is blown off the case and the killer is identified by Scotland Yard and Interpol as Janos Skorzeny, born in Romania in 1899. Skorzeny ended up in England during World War II, under the false identity of Dr. Paul Belasco, a specialist in hematology research whose work involved freshly-killed air raid victims from London's emergency rooms — his home was found to be equipped with a number of sumps, tubs, and a huge frozen meat locker — and after that he turned up in Canada, his path coinciding with incidents of violence marked by dead bodies, and his British citizenship making him an international fugitive. His travels are always accompanied by killings, each of which involved massive loss of blood in the victims. At a press conference outlining all of this, the authorities won't acknowledge that Skorzeny is a vampire — after all, that would be too fantastical — but Kolchak asks pointed questions about the superhuman display that he personally witnessed at the hospital, and puts forth that the only way the police will get this madman is if they proceed under the assumption that they are dealing with an honest-to-god, straight-up, real-deal vampire. Needless to say, this does not go over well with the local law enforcement and politicians, and Kolchak is issued a veiled warning to watch his ass, keep his mouth shut, and not interfere with the police investigation of the matter. With that, police efforts kick into overdrive, with round-the-clock surveillance, choppers deployed, and 650 officers on duty... And Kolchak doggedly continues to sniff out the trail.

Skorzeny soon resurfaces and, with Kolchak present to snap photos at point-blank range, is chased by the police , resulting in another melee punctuated with a hail of impotent gunfire. Any normal human would have been reduced to chutney by all the bullets and shotgun shells, but Skrozeny merely picks himself up, glares daggers at his pursuers, and again escapes into the night. After witnessing that display, Kolchak firmly believes Skorzeny is exactly what he appears to be, so he turns up for a private audience with the authorities, offers his advice on how to handle the vampire in exchange for the exclusive rights to the story, and outlines what should be issued to every man in the filed: a kit containing a crucifix, a mallet, and a wooden stake. His terms are agreed to, but with two conditions: Skorzeny must be taken alive so he can stand trial, and if Kolchak is wrong he must leave Las Vegas within 12 hours. Firm in his conviction, Kolchak takes the deal, overjoyed that the presumed windfall from being the reporter to solve the case will allow him to return to New York City, so he follows a contact's lead to the house where Skorzeny holes up during the day. With that information in hand, it is on...

This well-crafted made-for-TV movie surprised many with its quality and its success in the ratings, but all of the elements for something memorable were in place. The script by Richard Matheson, he of many classic episode of THE TWILIGHT ZONE, is firmly rooted in a believable reality, which helps sell the presence of a vampire serial killer, and the cast play their parts with totally human gravitas. The success of this effort led to a sequel, THE NIGHT STRANGLER (1973), and then the ongoing weekly ABC series, KOLCHAK: THE NIGHT STALKER (1974-1975), in which Kolchak, now operating in Chicago, would encounter and face off against a new weird threat and situation every week. It was the first primetime show that I, at age nine, discovered on my own that became must-see weekly programming, and I never missed an episode. I sometime watched it while cowering beneath the family room's coffee table, but I would have preferred to cut off one of my limbs than miss an episode. Darren McGavin became a hero to myself and legions of kids (and adults) across the nation, and the series offered a steady parade of monsters for Kolchak to contend with, ranging from the expected werwolves, vampires, and demonic presences to homicidal robots, ghost, zombies, and even Lovecraftian entites, so it was quite an education for monster kids.

I saw THE NIGHT STRANGLER and the TV series before I saw THE NIGHT STALKER itself, and I'm fuzzy on the details but I think I finally saw it when broadcast on NYC's venerable THE 4:30 MOVIE sometime around 1976 or 1977, and I could totally see why the movie inspired an ongoing show. It's quality stuff that retains an edge despite its FCC-approved content, and that same edge carried over to most of the series' episodes. Unfortunately, KOLCHAK: THE NIGHT STALKER only lasted for one season, and I have no idea if its cancellation was due to dwindling ratings or the fact that its "monster of the week" format was a a well that had pretty much run dry after 20 episodes, but its cancellation was a real gut punch. The show returned as reruns on THE CBS LATE MOVIE in the late 1970's and proved a ratings hit, and it remained such whenever it was subsequently brought back in syndication. There was even an attempt at a reboot series in 2005, but without McGavin, there really was no point. Let's just be glad that was got to spend as much time investigating the mysterious and gruesome as we did with Carl Kolchak. I can;t speak for the rest of you, but it was absolutely a formative influence on my fervent love of horror as a genre, and my quality of life during those tender years was definitely improved by its presence. 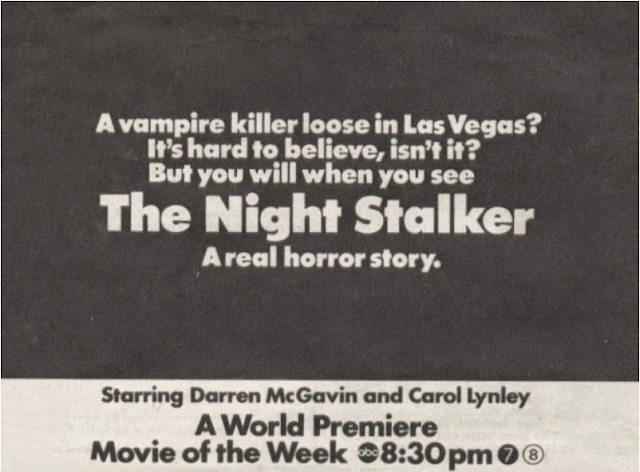