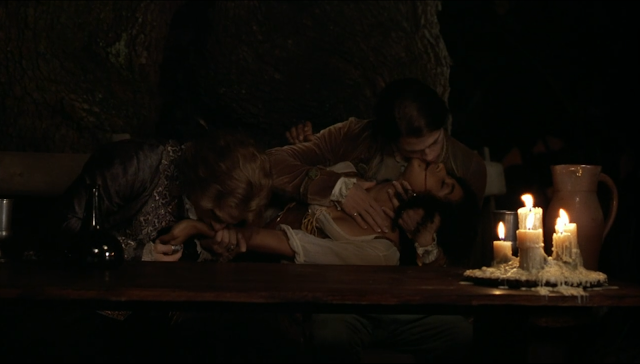 In present day San Francisco, a journalist (Christian Slater) scores the interview of a lifetime when he follows a mysterious stranger and asks him to tell his story. The mystery man is one Louis de Pointe du Lac (Brad Pitt), who claims to be a 24-year-old who became a vampire in 1791. Understandably skeptical at first, the interviewer is soon convinced of Luis' claim by displays of his inhuman speed and clearly otherworldly pallor and eyes. Luis then recounts his tale:

Distraught over the death of his wife in childbirth (along with the baby), Louis, the owner of a slavery-era plantation just south of New Orleans,  gives up on life and seeks death by misadventure. During an evening out, he is rescued from a knife-wielding pimp by Lestat de Lioncourt (Tom Cruise), a vampire dandy who senses Louis's bleak mental state. Lestat briefly feeds on Louis, but leaves him alive in a state straddling mortality and vampirism, giving Luis the choice to join him in eternal life. Louis accepts and Lestat allows him to feed on his vampiric blood, which transforms Louis into a creature of the night. The pair go about the nighttime scene in and around New Orleans, with Lestat merrily feasting on three kills per night — a young woman as an appetizer, a gelded boy as the first course, and a member of the aristocracy as the main dish — while Louis, who cannot bring himself to murder innocent people, instead makes do with rats and chickens (which do not satisfy like human blood).

Louis does his best to resist but eventually gives in to his unnatural bloodlust, which only delights Lestat, for now he believes he has at last found a true partner in his murderous immorality. But when the plantation's slaves start succumbing to mysterious deaths, the voodoo-practicing slaves, who fear Lestat and believe him to be the devil, embark on a revolt. Louis, who kills a favored slave (Thandie Newton) when unable to resist his urges, is disgusted with himself and the whole (un-) lifestyle, so he orders all of his slaves to flee as free men, for he and Lestat are indeed the devil, and then puts his home to the torch.

The pair flee to New Orleans, where they feed on the local prostitute talent, but, disgusted again, Louis wanders the streets in a state of bummed-out contemplation. He makes his way to a section where a plague is killing the locals, and it is there that he encounters Claudia (Kirsten Dunst), a pre-pubescent girl whose mother has perished from the disease. Seeking to do her a kindness by killing her (while also sating his hunger), Louis puts the bite on Claudia, but it is Lestat who converts her to vampirism with his blood. Sensing their relationship needed something to unify him and Louis, Lestat creates Claudia as a their "daughter" who will give them someone to parent and thus make them a family. 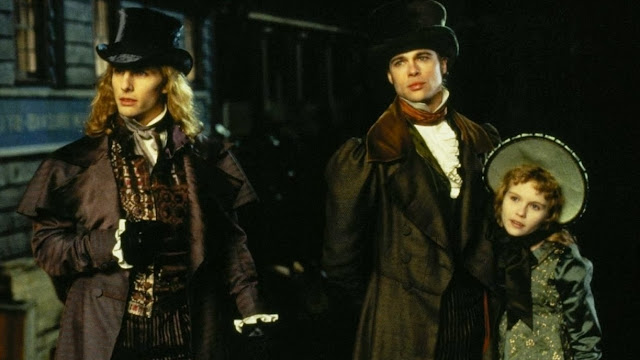 Lestat, Louis, and Claudia on a family outing.

In no time, Claudia proves herself to be a born killer, far outstripping Louis as Lestat's hoped-for protege. But what neither adult considered was the damage that would be done by Claudia mentally and emotionally growing up but being forever trapped in the unchanging body of an 11-year-old. Filled with resentment, Claudia engineers a way to remove Lestat from the pictures so she and Louis can travel the world in search of others of their kind. After years of fruitless questing, the pair finally encounter other vampires, in fact a whole theater troupe of them, and then things get really interesting...

I read the novel of INTERVIEW WITH THE VAMPIRE during my junior year in high school (1981-1982) and I enjoyed it a lot, even going so far as to be inspired to draw a family portrait of the central trio. (A piece that long ago vanished into the ether.) It was arguably the first popular novel to truly get into the heads of its monsters, and though they committed heinous acts, it was impossible to to relate to and sympathize with them. Anne Rice's novel was the first vampire novel brings up the now-tired trope of the alluring, glamorous undead, along with focusing the narrative on deeper themes instead of merely providing a "shocker" of a yarn. The novel was written as a means for its author to come to terms with the death of her four-year-old daughter from cancer, and her grief and general sadness are all over every page. A funfeel-good read it definitely is not, and that attitude carries over into the film adaptation. Though the movie obviously cannot convey the story's themes of loneliness, family dysfunction, and pervasive bleakness with the same depth of prose, the translation to the screen does a damned fine job, bolstered by lavish production values and a rock-solid cast. Tom Cruise at first seemed to have been miscast as Lestat but, and I say this as someone who's read the first five out of the 11-book series, his usual obnoxious smarmy manner is just right for conveying Lestat's assholism and arrogance. Brad Pitt was likewise and unlikely pick for Louis, but his face communicates Louis's world-weary melancholy to great effect. But it's wee Kirsten Dunst who steals the film with her stunning portrayal of Claudia. 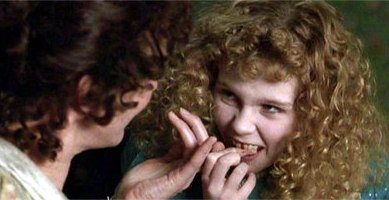 Kirsten Dunst as the bloodthirsty Claudia.

In the novel Claudia is turned when she's only 5, which would have been impossible to do with a kid actress that young, so aging her up a bit was a matter of necessity. Fortunately Dunst was up to the challenge, and she absolutely convinces as an eternally young grown woman trapped in the body of a child. It's a horrifying concept, and she knocked it out of the park.

The novel drew its power from being a multi-player character study of infernal creatures, ephasizing sadness and creep-factor over actual visceral scares. The scares put forth by the novel are strictly conceptual, though there's certainly no shortage of blood and gruesomeness, and that carries over into the film. It's not scary, per se, but it very eerie/creepy in content, and there's a LOT of Karo syrup blood on display. In short, INTERVIEW WITH THE VAMPIRE is horror for an adult audience that can groove on its MASTERPIECE THEATER vibe and flavor, and truly enjoying what it has on offer is very much dependent upon having a certain amount of experiences with the misery of adult life and its existential horrors. Recommended for vampire fans and for most audiences of 16 and older. Younger viewers will likely find it too boring and nowhere near gory of shocking enough, but I wholeheartedly dig it. 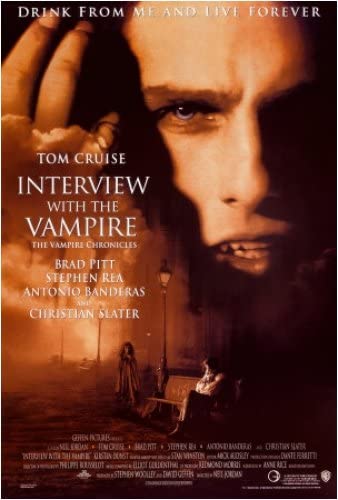 Poster from the theatrical release. I get that Tom Cruise was the biggest draw in the film, but this poster is flagrantly misleading. This is Louis's story all the way.