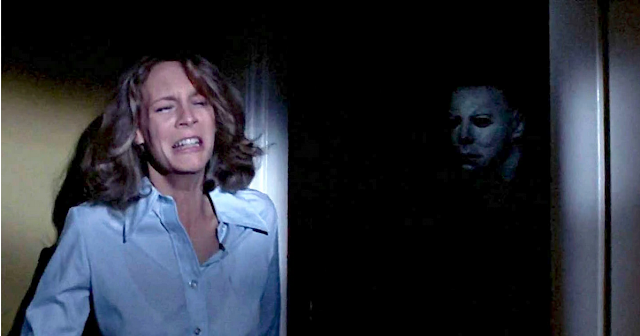 A bad night for babysitting.

John Carpenter’s HALLOWEEN emerged seemingly from nowhere to set the tropes of what we now know as the slasher movie genre in stone, and as it has been written about ad infinitum since its release, I had until now avoided commenting on it in my yearly essays. Now, I only seek to include it because it’s an iconic piece and a game-changer for horror, and also because I want to get around to citing as many of the all-time classics as possible.

In the fictional town of Haddonfield, Illinois, on the night of Halloween in 1963, six-year-old Michael Myers, dressed in a clown costume, stabs his teenaged sister to death with a butcher knife. With no motivation evident, the boy is relegated to a sanitarium for the next fifteen years, eventually escaping in time to get his hands a William Shatner mask and a mechanic’s overalls just in time for an implacable murderous rampage on Halloween night. Silent and seemingly superhumanly powerful, Michael (Nick Castle) makes short work a group of the neighborhood teens, with only virginal bookworm Laurie Strode (Jamie Lee Curtis in the role that would define her career) left to menace. Laurie’s babysitting a pair of kids, so when Michael comes calling she must fight for their lives as well as their own. As the bodies pile up, Michael is pursued by Dr. Loomis (Donald Pleasance), his former institutional psychiatrist, with Loomis bearing a deep understanding of exactly what Michael is: an unstoppable entity of purest, most unbridled evil, in short, Michael is the Boogeyman. That’s all the explanation given and that’s all we really need. Michael Myers is that primal childhood fear of a reasonless monster that exists for no reason other than to kill, and as such he is the essence of terror distilled down to its most basic and potent.

HALLOWEEN is simplicity itself, shot on a shoestring budget and crafted as nothing kore than a massive “BOO!!!” for an eager audience. It’s not deep and it features allegory or social commentary. It’s simply a blank-faced, silent killer stalking and bumping off teens without any hope of a challenge, until he meets Laurie and encounters her equally-dogged will to protect her charges and make sure they all survive. It’s a setup that is all too easy to relate to, even with its weird elements (Michael being apparently unkillable, for one), and that no-nonsense approach made HALLOWEEN one of the most successful independent films ever made, raking in a box office yield of $60-70 million bucks off of a budget of a reported $300-$350,000.

HALLOWEEN’s plot is nothing more than a stripped-down “girl in danger” yarn, but it’s the direction of John Carpenter, his now-iconic score, and its considerable visual artistry and editing that make it rise well above the pack. And its success did not go unnoticed by other filmmakers — most notably those responsible for FRIDAY THE 13th two years later — and in no time studios were churning out slasher films in droves, ripping off many of the tropes established by HALLOWEEN, but bearing little or none of its craft or creativity. HALLOWEEN achieved horror perfection without a trace of gore. It's descendants... Not so much.

Though PSYCHO and PEEPING TOM (both released in 1960), can be considered precursors, HALLOWEEN is the true Ground Zero for the slasher genre. This is where it all started, and after exploding out of the gate with such a genuine work of cinematic art, there was nowhere else for slasher genre to go but down. This was lightning in a bottle and a proving ground for a director who would go on to craft a number of other landmarks of horror. Yes, there are a handful of subsequent slashers that possess merit, but this here is the gold standard. 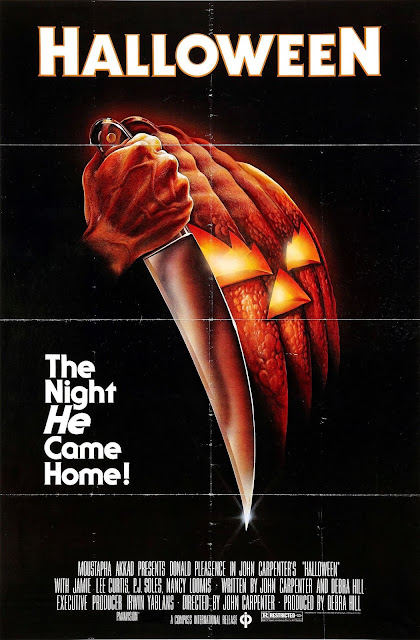 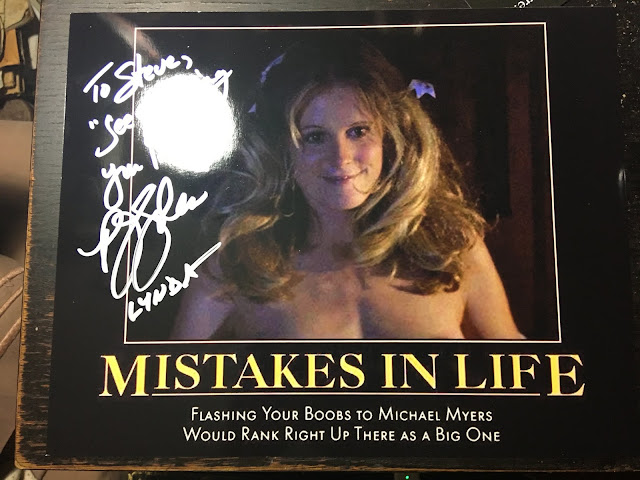 From the 2018 Chiller Theatre Con in Parsipanny, New Jersey. She's a sweetheart and very, very funny.