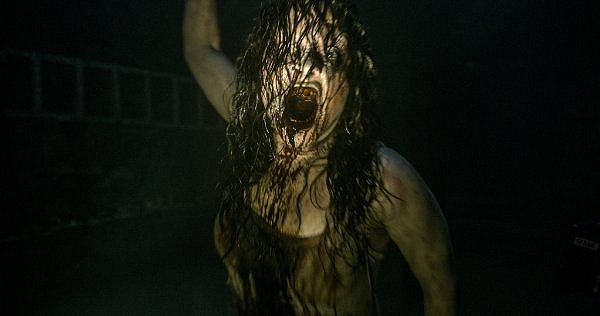 A different kind of cabin fever.

When the original THE EVIL DEAD came out back in 1981, it was lauded as an original and innovative alternative to the era's seemingly endless and mostly fucking awful assembly line slasher flicks, and it remains a landmark in the annals of 1980's horror films. It put both director Sam Raimi and actor Bruce Campbell on the map as cult figures and was followed by the delirious EVIL DEAD II (1987) —which perfectly walked the fine line between sheer terror and outright hilarity to end up as one of the best sequels ever made (I think it's easily the best of its particular series) — and ARMY OF DARKNESS (1992), which formed the end of what is now known as The EVIL DEAD Trilogy. I have to admit that I'm the rare horror fan who is not a fan of the original or of the much-beloved ARMY OF DARKNESS, though I do appreciate the original for being something different at a time when different was exactly what was need, so I approached the remake with no particular attachment to or great love for the 1981 version. If anything, I was hoping for a remake almost as good as the superb (though extremely nasty) 2010 take on I SPIT ON YOUR GRAVE. I saw the remake with a dear friend whom I've known since high school and he's a huge fan of the original; he saw it when he was about sixteen or seventeen, back when HBO was kind of still a new thing and a novelty, while he was alone and house sitting for a mutual friend's parents. He watched the original at night in a house he was unfamiliar with and didn't even know where some of the light switches were, so the stage was set for a young lad to have the living shit scared out of him. To this day he freely admits that it terrified him in a particularly primal way.

The new version follows the basic template that was set back in 1981, with a group of young twenty-somethings going to a cabin deep in the middle of nowhere and finding a dark tome via which unseen and incredibly evil forces are unleashed to wreak appalling havoc. The chief differences between the old and new iterations of the story involve a passage from the evil book now actively being read by one of group rather than the demonic force being called up by playing a recording of a recitation of one of the spells, and the reason for the crew being present in the creepy shack in the middle of nowhere being shifted from spring break to it being chosen as the site where heroin addict Mia (Jane Levy) intends to go cold turkey and have some of her friends and estranged older brother, David (Shiloh Fernandez) and his girlfriend, Natalie (Elizabeth Blackmore), around for support (plus Grandpa, the family pooch). David left home years earlier, leaving his sister behind to care for their demented mother, who ended her days in a mental institution — the dealing with of which apparently set Mia on the path of hard narcotics — with his desertion royally pissing of their friends, registered nurse Olivia (the dark and lovely Jessica Lewis, whom you may remember from CLOVERFIELD) and school teacher Eric (Lou Taylor Pucci), who had to handle Mia during her last attempt at abrupt sobriety. That previous situation not only nearly resulted in Mia's death by overdose — in point of fact, she actually was dead but eventually revived by defibrillator — it also added fuel to the fire of the group's reunion due to David's absence during that near-fatal O.D.

So what we have here is a bad situation made immeasurably worse when the crew heads into the cabin's basement in search of the source of a foul stench and discover the revolting evidence of some sort of dark and horrifying witchcraft ritual (which is seen before the titles). It's never a good idea to enter the basement of a remote cabin in the woods — as we have seen many, many times previous, and as was quite pointedly commented upon for the ages in 2012'ss brilliant THE CABIN IN THE WOODS — and it's especially poor judgment to retrieve something that's been sealed in an industrial trash bag and subsequently tightly wrapped in barbed wire. So of course egghead Eric snags said taboo object, opens it, and finds an ancient book haphazardly bound in what appears to be human skin, with pages scrawled with an arcane alphabet hand-written in blood. Loaded with fucked-up illustrations and hand-scribed notes in English that in no uncertain terms warn the reader not to read the book or speak any of its passages aloud, this is the kind of shit that you or I would take one look at and immediately put as much distance between ourselves and it as fast as humanly possible. But, as this is after all a horror movie, over-educated Eric of course does exactly what the notes explicitly warn him not to do, and in no time the withdrawal being suffered by Mia is compounded with a serious dose of full-on, foul-mouthed, murderous demonic possession. 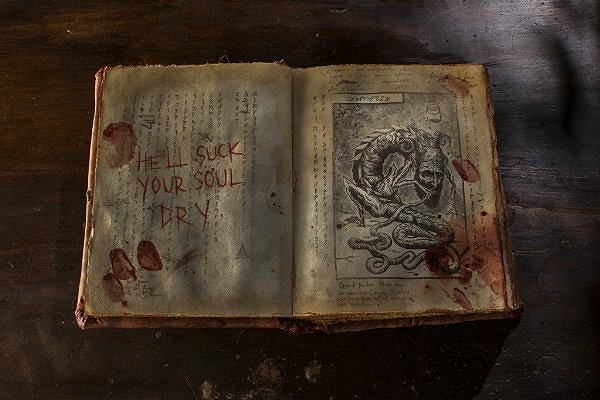 Kids, if you find something like this securely wrapped up in a garbage bag and barbed wire at the site of what was obviously some kind of ultra-evil ritual, complete with the putrefying remains of animals suspended from the ceiling... 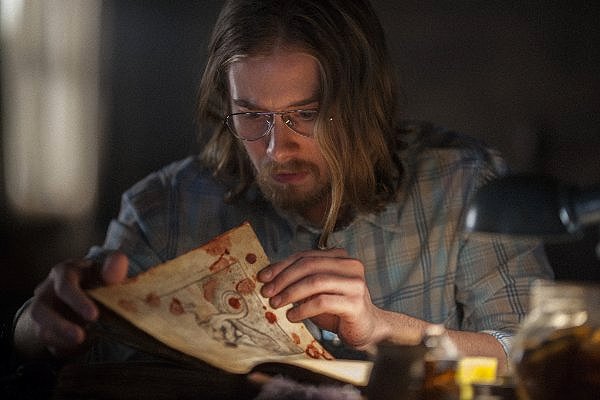 ...do NOT read aloud from the fucking thing like this fucking idiot did! Round up your friends and get the fuck out of there immediately!!!

From that moment forward, no one is safe and and the sanity and fortitude of all will be pushed to the brink and beyond.

As remakes from the current spate of such efforts go, EVIL DEAD is entertaining enough but it does have some problems. First and foremost, it's just not that scary, despite it being as serious as a heart attack when compared to the original's twistedly humorous approach. Sure, the possessed Mia is creepy as all get-out but the film's suspense is minimal and the narrative relies on gore rather than genuine scares to deliver the shocks. The film is clearly a product of the influence of "torture porn" flicks like the SAW series and HOSTEL, wherein excruciating depictions of mutilation and suffering are lingered over with a borderline-prurient gaze, creating in the audience a sense of physical discomfort as opposed to the more visceral dread generated by the primal horrors wrought by trying to wrap our collective heads around forces and beings that we cannot hope to understand or prevail against. Seeing some crazed psychopath slowly drag a weathered machete across the flesh above one's kneecap is something that's all-too-easy to understand and relate to, and while it is definitely horrifying in the way that the details of  the real-world's "mundane" serial murders can be, it's just not comparable to the horror of the imagination. Instead of making that sort of effort, the film delivers amounts of gore and spew that frankly surprised me, especially when considering how pussified the MPAA has been when applying ratings to violent/gory content over the past twenty years or so, and as such EVIL DEAD will no doubt delight gorehounds to no end. In fact, on the scale of sheer gore, this film easily receives a solid 10 out of a possible 10, which makes me wonder if anyone at the MPAA even saw it.

Now don't get me wrong, I love gore. Love it! It's just that I'm no longer an adolescent who's jonesing for "forbidden" sights and thrills and plot be damned, so when I am treated to bucketloads of the red and gooey stuff, I like to see that element in service of a story with real narrative flesh beyond something told around a campfire. My own personal taste in horror nowadays runs more toward what the given scary scenario has to say about the human condition, and in this case I suppose the demonic possession and what it results in could be seen as a commentary on addiction and how it affects the addicted individual and their loved ones written in the most broad of strokes, but EVIL DEAD obviously has no such considerations on its mind and is instead content with giving us the most basic of setups as an excuse for what is an admittedly impressive bit of way-over-the-top charnel house entertainment. That's all well and good but the individual audience member's mileage may vary.

Some of the gruesome set pieces are quite compelling in the way that one is powerless to look away from a car accident where severed body parts litter the asphalt and splashes of what was once the very fluid that fueled those bodies paint the tableau in congealing sanguinary shades. Especially good are the rather...intimate way in which the entity enters Mia's body (in a nod to the original's infamous tree sequence; ladies, you are guaranteed to squirm), Natalie's solution to a possessed left arm (hint: it involves an electric carving knife), a lesson in the offensive application of a loaded nail gun, and the bifurcation of a once-human tongue via the use of an extendable utility knife, all of which employ the modern grand guignol sensibility taken to a giddy extreme. 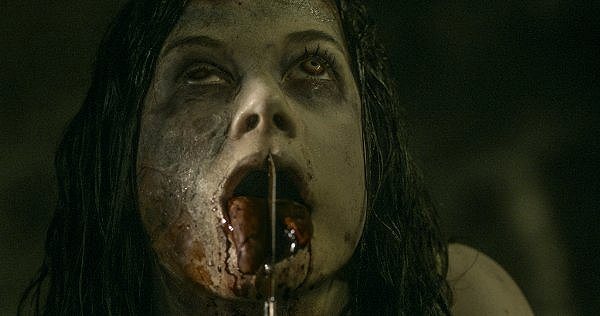 It should also be noted that this is the first feature from Uruguayan director Fede Alvarez, and while he does not hit the audience with the kind of innovative razzle-dazzle that Sam Raimi brought to the proceedings thirty-two years ago (though certain shots crib from Raimi's memorable stylistic touches), this effort is assured and quite professionally crafted. I hope this film is a springboard to bigger and better works from him.

So when all is considered, I recommend EVIL DEAD but also advise waiting for cable, unless you just have to see its excesses unspool on the big screen, which I can certainly understand. It's entertaining for what it is — not great but entertaining — and if you are a gorehound, you will be in hog heaven. If, however, you are like me and prefer your horror with more meat to it, it's an okay way to pass the time until something heavier is unleashed. Oh, and there's an extra for those who stay through to the end of the film's credits. I mention it solely for completists as it is an utterly gratuitous piece of fan service, adds nothing to the narrative, does nothing to set up a possible/inevitable sequel, and it's over in maybe six or seven seconds. If you miss it, you miss nothing but I figured I alert you to it anyway. 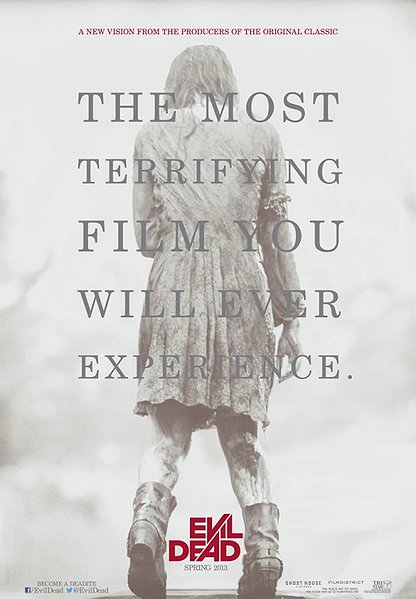 The poster for the theatrical release, making a claim that few films live up to and that this one definitely doesn't.
Posted by Bunche (pop culture ronin) at Thursday, October 08, 2020