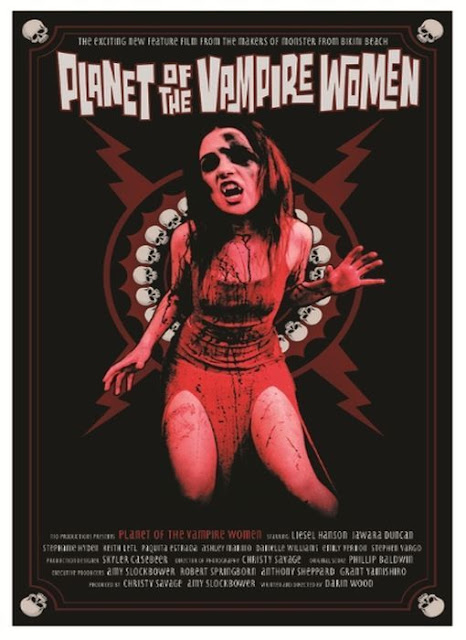 As you've probably gathered after reading enough of my reviews, I'm a tough audience and that critical eye certainly extends to the cheesy stuff I sit through. I love low-budget/B movies, provided they entertain me and provide me with something fun to sit through. In the case of PLANET OF THE VAMPIRE WOMEN, I did not think it was terrible, but I cannot say I enjoyed it or that I would recommend it.

The plot follows a crew of infamous space pirates who rob an orbiting casino/brothel of cash and an antique space cruiser, and what befalls them when they are subsequently pursued by a dogged police officer (Jawara Duncan). After unnecessarily spending a half hour leading up to the heist and providing viewers with a bevy of nekkid titties, the pirates head to a mysterious planetoid where their captain (Paquita Estrada) is possessed by a strange parasitic entity that turns her into a vampire (which is convenient since she already looks like a Goth dominatrix, only she's black). After killing one of her crew (who subsequently rises as a vampire minion), the captain escapes the ship and heads for the mysterious ruins on the planet's surface, where evidence of an advanced but extinct civilization reveals how disembodied vampiric presences wiped out the indigenous populace. More vampirism ensues as the remainder of the crew pursues the captain and eventually discovers the secret of the parasitic entities and realizes that the creatures must not be allowed to venture from the planet lest they spread throughout the universe. 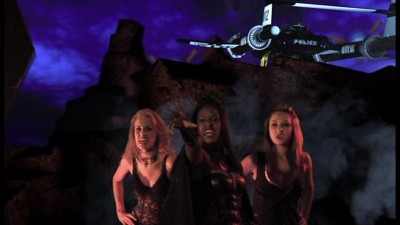 That setup is rife with promise and could have made for quite a memorable little bit of fun, but the key problem here is pacing that redefines the word "lugubrious." The first half-hour is padded out to a merciless degree and considering the setup of the heist and the need for exposition on who the characters are, all of that stuff leading up to and including the crash-landing could have been accomplished in ten minutes rather than thirty. Gratuitous nudity is always fun and chase scenes can be entertaining, but not when they're so clearly being used to cover up the fact that nothing is going on in the narrative for long stretches. Once the crash has happened, it was yet more drugged-Brontosaurus pacing that went nowhere. That was a shame because even with the minimal exposition and characterizations, we were given enough info about the main characters to get that they could have been much more interesting if they had been served by a tighter script.

A movie like this could get by with having its characters engaging in interesting/clever dialogue while running around on that hostile planet, but what there was of the dialogue was too sparse and did nothing to alleviate the drag factor. The only characters who truly generated interest were former-Marine Maldonado (Liesl Hanson, looking very butch-cute), cyborg Automatic Jones (Keith Letl), drug-addicted and officially disgraced Doctor Calaveras (Stephen Vargo) and Astrid Corvair (Stephanie Hyden), a smart and sunny pleasure-clone with the ability to change her appearance with a suggestive flick of her hips (whom I liked rather a lot, despite her being a less-gratuitous and comparatively non-violent Cutey Honey knockoff), and the four of them could have easily carried a whole movie without having to resort to the whole staler-than-stale vampire trope. For example, when questioned about displaying what seems to be an uncharacteristic and considerable amount of knowledge about alien archaeology, the bubbly Astrid, who up to this point seemed to be little more than a dumb blonde stereotype with a gimmick, cheerily replies, "There's a lot of down time between all the fucking and sucking. I read a lot." If only the rest of the script displayed such wit. 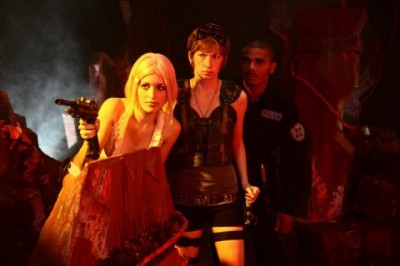 Exploring the mysterious planet.
I could go on, but I won't. The effort that went into it was all there on the screen and its low-budget in no way detracts from its potential. In fact its DIY qualities added to its charm, giving it a feel like a gene-splicing of PLANET OF THE VAMPIRES, ALIEN, RED DWARF, JASON OF STAR COMMAND and the third season of LOST IN SPACE, with acres of tits thrown in for good measure. So basically my problems with it all come down to terrible pacing and a script that needed a lot more work. When seeking to overcome budgetary limitations, a script for a story like this needs to either be as serious and taut as a heart attack, or else it needs to be flat-out funny, and this script did not have enough of either to fully work for me. But, as previously stated, I'm a tough room and I am also not clairvoyant, so I can't predict how well PLANET OF THE VAMPIRE WOMEN may work for you.
Posted by Bunche (pop culture ronin) at Wednesday, October 07, 2020