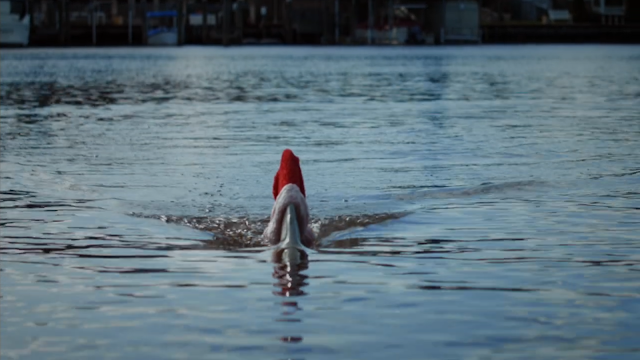 No, you are not going insane.

"He who holds this pen holds great power. With generosity and heart, it can only do good.  Beware of he who uses it for selfish gains."

Port City, Louisiana:  It's shortly before Christmas and high school-age aspiring comics creator Cody (Reid Miller) illustrates a comic book story about "Santa Jaws," a Great White shark that eats a homicidal Santa, is infused with his evil,  and becomes a sea-roaming force of carnivorous malevolence. As his family gathers for what looks to be a tension-filled holiday, Cody's posted-to-social-media drawing of his tyrannical principal lands him a week of being grounded, which throws a monkey wrench into his plans to attend a party at local comics shop. Upon being banished to his room, Cody finds an early Christmas gift from his grandfather, Papa Joe (Richie Montgomery), an antique-looking ornately silver-and-gold-adorned fountain pen in a wooden case engraved with a mysterious German phrase, and sets about inking one of his illustrations of Santa Jaws. (If you've ever seen a horror movie, you know what an old magical item looks like on sight, and that fountain pen falls squarely into that category.)  But it's Papa to the rescue, as he wakes Cody early for their annual morning of Christmas Eve fishing trip. If Cody sneaks out with Papa, Papa will swing him by the party on the way home. The pair make it to the pier, but a mysterious green surge of energy below the surface manifests a Great White shark whose fin sports a Santa hat. Yes, Santa Jaws has magically come to life, given form by Cody's wish to be rid of his annoying family, and her first move is to eat Papa. 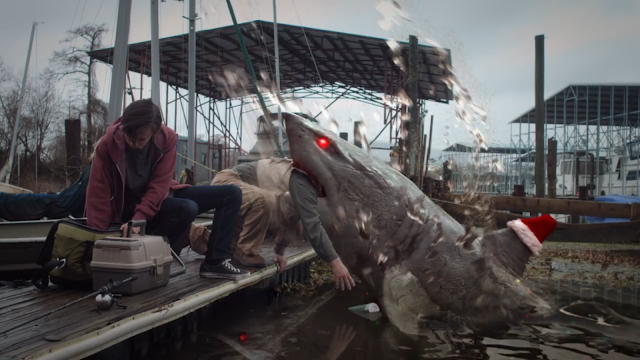 Just when you think you've seen everything ridiculous.

A distraught Cody returns home and alerts his family to Papa having been dragged to a savage end in the depths, but none of them believe him and instead berate him for spinning lies. As the family leaves him at home by himself, Mom having taken away his cell phone and threatening grave reprisals if he should sneak out again, Cody nonetheless sets out to investigate how and why Santa Jaws somehow corporealized into reality. Aided by a small Scooby Gang of friends and family, Cody learns that Santa Jaws is attracted to Christmassy things — a Santa hat, spilled eggnog, Christmas lights, a guy in an elf costume who's eating lunch on the dock — and that it can be harmed by items associated with the holiday.  Things become desperate as the body count grows, but Cody proves his mettle by facing up to his fears and by remembering the value of his family.

More of a comedy than an actual horror film — Seriously, how could it not be ? — SANTA JAWS is that rare effort of ridiculousness that knows exactly how utterly stupid its concept is but plays it straight, thereby upping its silliness. The gravitas with which the characters treat a shark with a Santa hat on its fin is hilarious in and of itself, and it only gets more idiotic when, in an attempt to put a stop to Santa Jaws by impaling her, Cody draws a candy cane harpoon being driven through the shark's head, only to have that strategy backfire and turn her into a Christmas-themed killer demi-narwhal. 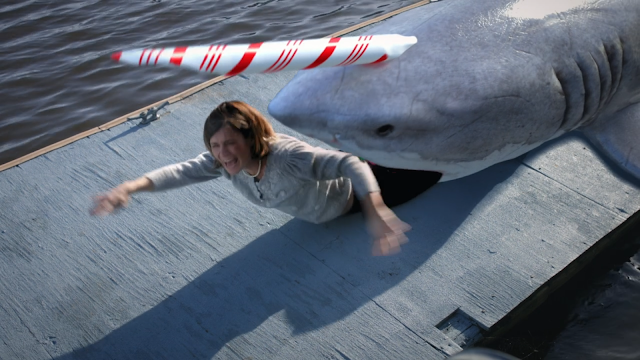 And while a comedy, some of the deaths are rather nasty, and in some cases quite unexpected and shocking, but when one of the plot's key elements is a magic pen in the hands of a protagonist who can tell visual stories on paper and make anything happen, the ending is pretty much a foregone conclusion and kind of a forgivable cop-out.

SANTA JAWS is utterly and charmingly shameless for knowing exactly what it is and delivering its madness with a straight face, and as such it's a good addition to the roster of off-beat Christmas films. Its gore is minimal, so it's perfectly suitable for anyone over the age of six, and it makes up for its lack of visceral shocks by having its heart in the right place and by being genuinely deadpan funny. A ture surprise and definitely RECOMMENDED. 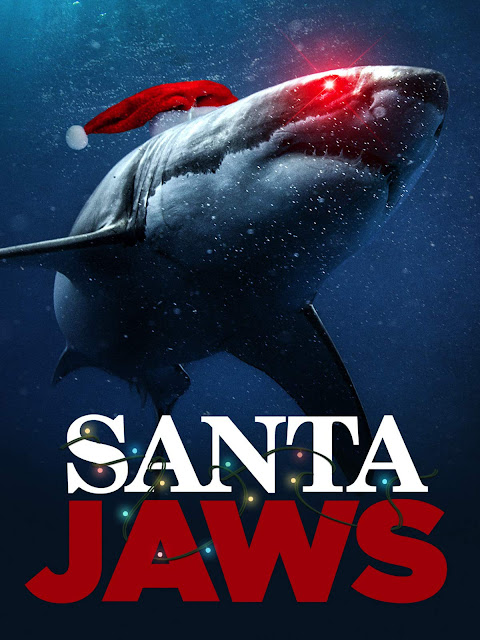 Promotional image for the film.