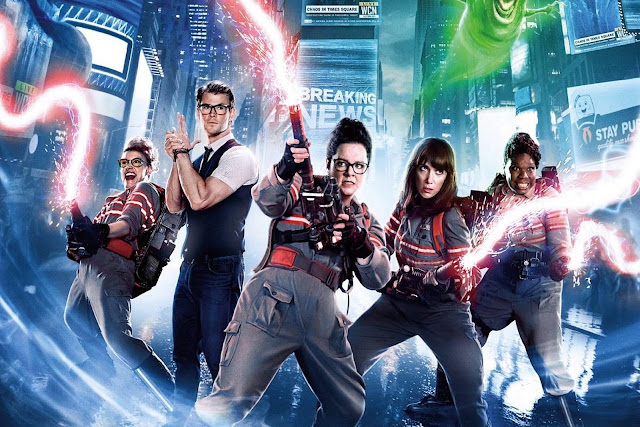 I wish they'd aimed their proton blasts at my head and blown it off, rather than allow me to sit through this creative cul de sac...

I finally sat through the much-maligned GHOSTBUSTERS (2016) and while it is not the worst thing I've ever endured — far from it — it really is as bad as they say. As I endured it the other night, by about 48 minutes into it I decided against writing on it for this year's round of seasonal essays, but after mulling it over further I figured I'd just bite the bullet and let my voice be heard.

The 2016 GHOSTBUSTERS is basically an attempted remake/reboot of the classic 1984 supernatural comedy, and as such it's defeated as of frame one. The original was an unarguable case of lightning in a bottle, the prefect film that landed just at the right time in history and that went on to become a beloved touchstone. Everything about it, from its script to its performances to its superb practical effects, was right on the money, and anyone with a brain in their head could sit through it and tell you that it was the kind of thing that just cannot be replicated or sequelized without subsequent entries being doomed to be at the very least lesser than the source material. Such was the case with GHOSTBUSTERS II (1989), a sequel that was painfully lackluster in every way, and that's definitely the case with the 2016 iteration. There was a reason why the would-be franchise lay fallow for 27 years after the failure of the first sequel.

This time around the studio pretty much stuck to the concept of the original film, which was an origin story but clearly intended as a "done in one" piece, but this time around the four protagonists are played by well-known comedic actresses, three veterans of SATURDAY NIGHT LIVE — Kristen Wiig, Leslie Jones, and Kate McKinnon — and one all-purpose comedic mainstay (Melissa McCarthy, who was phenomenal in BRIDESMAIDS and the criminally underrated SPY).

In a nutshell: The group comes together after managing to capture a ghost, but the NYC Mayor's office demands that they shut down operations immediately, despite the Mayor knowing what they do is real, so as to avoid mass hysteria, and the officials also launch of campaign to discredit the Ghostbusters as attention-seeking frauds. Meanwhile, a disgruntled misanthrope plots to bring about the end of the world by opening a portal the beyond, killing himself in the process as part of his plan, thus becoming a ghost of considerable power. The final act is a rehash of the end of the original, only with modern CGI effects that make it look like watching someone else play a video game. Also, the film  is peppered with loads of catering to nostalgia, including useless cameos by the remaining principals from the 1984 original, a memorial bust of Egon Spengler (since Harold Ramis is the only original Ghostbuster to have died in real life),  a regular hearse pimped-out into the new Ecto-1 (which makes zero sense as the original Ecto-1 was clearly a vintage ambulance), an appearance by Slimer, and an awful contemporary version of the Ghostbusters theme (as if the original wasn't over-saturated ad nauseum, and it's still in fairly heavy rotation on oldies stations and during Halloween), none of which add anything to the overall narrative.

The cast seems to have been handed the most rudimentary of scripts and told to improvise and "be funny," and while all of the leads are quite capable of eliciting laughs elsewhere, the ad-libbing here was out of control and mostly crashed and burned. The bright spots in the performances include Kate McKinnon's deliriously weird engineer Holtzman, who's so strange that she often feels like she escaped from some other far-better movie. She the maddest of mad scientists and she's so bizarre that it's impossible not to want to see her in the spotlight. For me, McKinnon stole the film. The other standout, and a true shock to me, is Leslie Jones as Patty, a subway booth worker with real smarts and an encyclopedic knowledge of the history of New York City's buildings and landmarks, which comes in handy when she becomes the fourth Ghostbuster. I am not a fan of her work elsewhere, as I find her usual schtick to be loud, ghetto-stereotypical, and coonish to the point of bordering on minstrelsy (minus burnt cork), but here she was easily the most grounded, normal-acting, and relatable of the protagonists. And then there's Chris Hemsworth, who's about as far away from his signature performance as Thor as he could get. He plays Kevin, the hunky receptionist who gets hired because he's major eye-candy, despite the fact that he is dumber than a bag of hammers. Hemsworth was allowed to do a lot of ad-libbing, as he has proven himself quite capable of delivering laughs elsewhere (most notably in THOR: RAGNAROK), but here he ventures deep into the Twilight Zone of bizarro dumber-than-dumb character creation. Kevin is simply too stupid to live, and even within the context of a goofy comedy, he's just too much. No one in their right mind would hire him for any job imaginable, and his would-be wackiness utterly fails to land. To put it more succinctly, it wastes its cast — I'm looking at you, Charles Dance — with the exception of Kate McKinnon's aggressively loony distaff Egon Spengler, and and Jones's relatable everywoman who's thrust from the mundane world into paranormal weirdness and superheroics virtually overnight.

It's all a soulless and wholly unnecessary quasi-remake reboot that brings nothing to the table and apparently had no real creative vision going in, other than to establish a franchise that the studio could milk the shit out of. The jokes all fall as flat as a roadkill raccoon, and there is nothing as tragic as a comedy that utterly fails at its main goal, which is making the audience laugh.

GHOSTBUSTEWRS 2016 is a creatively bankrupt piece of cranked-out corporate product cinema, no more, no less. And don't blame its failure on its leads. Them being women has zero to do with it. This would have been a dud with anyone in these roles.  And now GHOSTBUSTERS AFTERLIFE looms, which is an attempt at course correction that chooses to ignore the 2016 iteration and instead focuses on a bunch of tweens who take up the Ghostbusters mantle. I hope it turns out to be good, but after the fialed direct sequel to the original and then the 2016 debacle, I have to say I have the lowest of expectations...