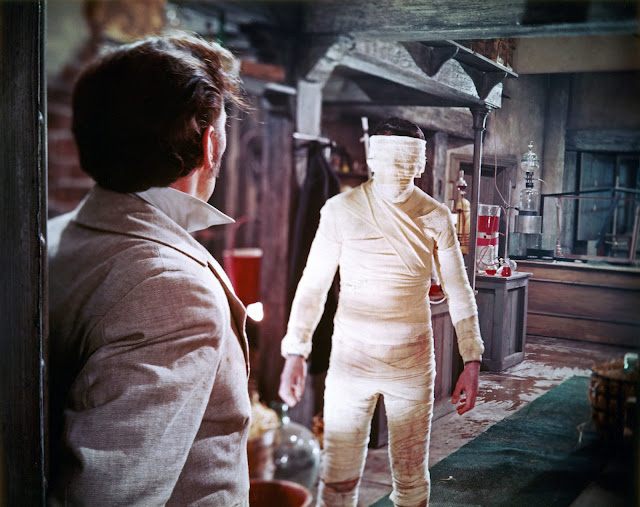 Taking the concept of "homemade" a tad too far.

Here we are, at the Hammer imprint's Ground Zero.

Though Britain's Hammer Studios had been around for a while, it was 1957's THE CURSE OF FRANKENSTEIN that put them on the map (along with the following year's HORROR OF DRACULA). WWII was only 12 years in the past, so memories of real-life horror were still quite fresh, and it was also the era of the fugue state between the Profumo scandal and England losing its cherry to the sexual and psychedelic excesses of the swinging Sixties, so the U.K. simply was not ready for Hammer's flavor of shocks. The Universal cycle was swiftly becoming an antique during a market dominated by alien invaders and gigantic monstrosities spawned by the dawn of the atomic bomb, so something new was needed to sate audiences. What Hammer brought to the table was lush (some would say garish) color, a pervasive Gothic atmosphere that felt like dark fairytales for grownups, a more "adult" sensibility — remember, the British had just endured WWII, so hiding the nastiness of the world was no longer an option — stories geared more toward the audience's experience as adults, a reasonable amount of "sauce" in the form of generous, heaving bosoms, and the groundbreaking depiction of then-copious amounts of fire engine-red blood (that always looked to me like Sherwin-Williams house paint). Hammer kicked off their horror run proper by reinventing horror's two biggest stars, Frankenstein and Dracula, by putting spins on them that worked from the late-1950's/early-1960's, and in the case of Frankenstein, the focus was shifted from the creature to the creator.

If you have seen pretty much any Frankenstein movie, you know the basic building blocks (and the fact that only the germ of them were cribbed from the classic source novel):

All of those elements are present in THE CURSE OF FRANKENSTEIN,  so there's little need to bother recounting the details of film's plot. All you need to know is that it's the 1800's in Switzerland and we are introduced to the aristocratic Baron Victor Frankenstein (Peter Cushing, in one of his career-defining roles), a wealthy scientific/medical genius who, with the aid of his tutor-turned-lab partner, Paul (Robert Urquhart), builds a man from random deceased components and seeks to grant it life. The pair discover the secret of life (which is conveniently not explained to the audience) and they have the hanged corpse of a highway man with which to get started. Now, all they need is a decent head and, preferably, the brain of a genius. As things escalate, Paul suffers bouts of conscience, while the baron forges ahead with a single-mindedness that can be read as madness. 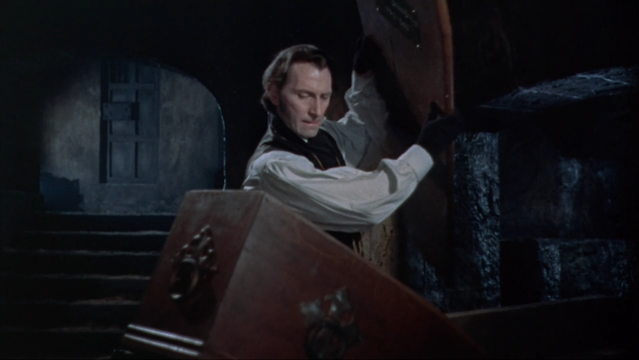 The Baron (Peter Cushing) goes shopping.
Matters are complicated when the Baron's cousin, Elizabeth (Hazel Court), arrives to take up residence at Victor's mansion. The Baron supported her and her mother since she was a child, but now her mother is dead and she has been promised to the Baron in an arranged marriage, which she's totally down with, but her presence throws a hitch into the Baron's ongoing affair with Justine (Valerie Gaunt), his lusty FRench maid. It all comes to head, and once it does, the Baron finds himself awaiting execution by guillotine, recounting his story to a priest in his dungeon cell.
The film was a massive hit, despite the open revulsion expressed by critics and certain sectors of the general public over its then-shocking bloodiness, medical gore, and mention of the French maid being made out-of-wedlock pregnant by the Baron. Other than those daring elements, it's a well-made but pretty standard Gothic yarn, with its other big difference being that it was made in color, which it certainly took advantage of.
If I have one gripe about the film, it's that its creature, brought to (un) life by Christopher Lee (who, like Cushing, became an icon for his subsequent Hammer roles, most notable his especially evil take on Count Dracula), really doesn't resonate much, other than for his visual aspect. 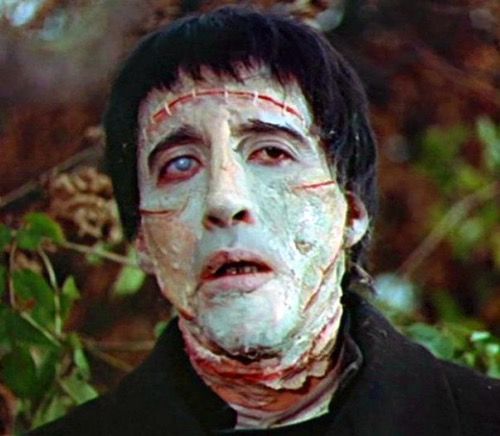 Christopher Lee as one of the most pathetic variations on Frankenstein's monster.

The creature has no personality and does not speak, as the genius brain was severely damaged during an altercation between the Baron and Paul, and it moves with an impaired stiffness that does not allow it to do much. It does manage to escape briefly and shamble about the local woods, but over the course of the story the creature racks up exactly two kills, both offscreen. If you're into Frankenstein movies, then this is definitely not the film for you. Some of us, however, are in it for the monster's creator, and here is where things get interesting. 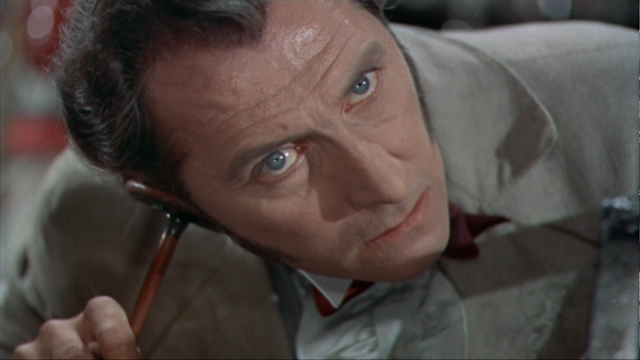 Peter Cushing, redefining Frankenstein from a mere mad scientist to an obsessed and cruel aristocratic sociopath.
Hammer's stroke of genius with its Frankenstein franchise was making the Baron the true monster of the cycle, and relegating the creature to mostly the role of being a goal to be striven for. The Baron rich and thinks himself beyond the laws of man and the Church, and he will stop at nothing to achieve his ends. Ghoulish grave-robbery and acquisition of fresh organs, abuse of those around him without a second thought, utter disregard for general human compassion and decency, the list goes on and would be further refined as the series progressed. He's a total hateful piece of shit here, but this is just the blossoming of the cold and vicious assholism that he would display further down the line. Cushing is always a delight, but his Baron goes so against his actual nice old man personality, it's astonishing. But, hey, such ifs the pint of acting.
THE CURSE OF FRANKENSTEIN, though rather tepid by today's standards, is a landmark and as such it is worthy of your time. It's not my favorite of the Hammer Frankensteins, but it's certainly a good entry with which to get the ball rolling. A solid origin story and definitely recommended. 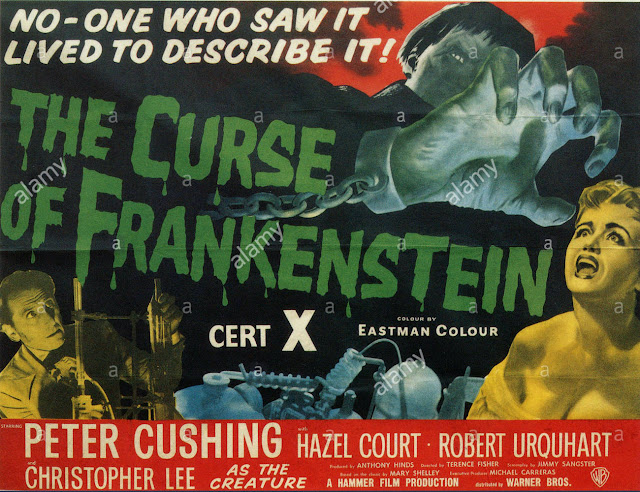