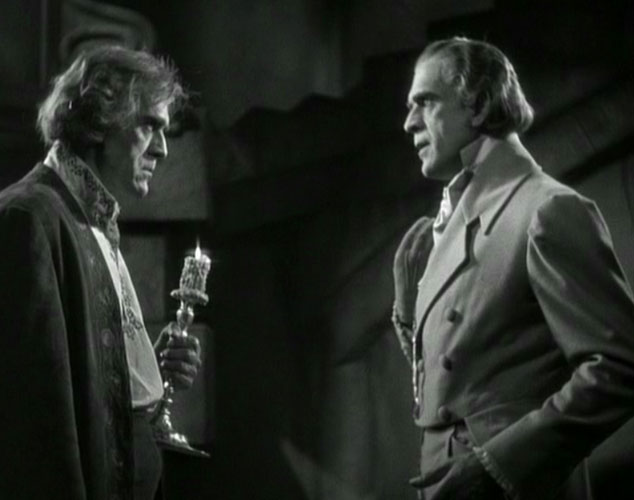 Gregor and Anton: twin roles that allow Boris Karloff to show of his considerable range

Hungary, the late 18th century: The twin heirs to the baronial clan de Berghmann are born, but their birth is not greeted with celebration. Their birth is a harbinger of the end of the family, as they are the fulfillment of a dire prophecy that states much as the line was begun by a pair of twins, the elder of which was murdered by his younger sibling, it was destined to come to an end when the same act of fratricide is committed by the next set of twin sons to come along. The catalyzing event occurred in the Black Room, a hidden dungeon featuring implements of torture and a deep it for the disposal of bodies. The identical twins, Anton and Gregor (both portrayed by horror legend Boris Karloff) are visually alike in every way, save for Anton being born with a paralyzed right arm. The boys grow up together in the castle and endure the deaths of their parents, and when their father passes Gregor, the elder of the pair, inherits the title of baron, along with absolute power over the local peasantry, while Anton leaves to travel abroad and study. Things skip ahead by many years and Anton returns to the castle, summoned by Gregor. His resemblance to his brother shocks the locals, who had more or less forgotten his existence, and Anton soon discovers that his brother is hated with a white-hot passion by all and sundry. In the years since Anton's departure, Gregor has proven himself to be a cruel and tyrannical ruler who also sidelines in the rape and murder of girls from the village, thus fomenting an imminent uprising by the locals. Upon arriving at the castle, Anton is warmly welcomed and attempts to verify the claims made against his brither, but Gregor shuts down his inquiries at every turn.

The pair are invited to the home of family friend Colonel Hassell (Thurston Hall), where Anton meets and is instantly smitten with the Colonel's lovely daughter, Thea (Marian Marsh). Gregor has long had designs on Thea and makes it known to her father that he intends to make her his baroness, but Thea's heart belongs to young soldier Lieutenant Lussan (Robert Allen), who distrusts Gregor and would kill him in cold blood if he could get away with it. With the love quadrangle in place, Gregor sets in motion a diabolical scheme that frames the Lieutenant for the murder of Gregor's mistress, Maska (Katherine De Mille), thus getting him out of the way, and arouses the ire of the locals who, having had enough of his evil, storm the castle with the intent to kill him. Gregor weasels his way out of his lynching by agreeing to leave the country for good, abdicating his title and responsibilities to Anton. Once the locals have agreed to this, Gregor Lures Anton into the Black Room, revealing that he summoned his brother home because he knew it was only a matter of time until he met his fate at the hands of the justifiably pissed-off peasants, and he intends to murder the kindly Anton and take his place. Anton is unceremoniously pitched into the pit while holding the knife Gregor attempted to stab him with, and he perishes, but not before swearing that he will kill Gregor, even if he has to return from the grave to do so. With that, Gregor seals the pit and reminds himself that from that day forward he shall become his brother in every way, even affecting his brother's paralyzed arm. Some time passes and Gregor then murders the Colonel, who who had figured out the deception. Unfortunately the Colonel did not act upon that knowledge sooner, as he has Gregor (as Anton) sign legal documents granting him custody of Thea as her guardian, along with giving him full access to all of her property and finances. He then capitalizes on Thea's grief over her father's death and sadness at her true love awaiting execution for a murder he did not commit, proposing that she become his baroness. It all builds to its inevitable conclusion, and end that can only come in the Black Room...

Is there anything more horrifying than family dysfunction?

THE BLACK ROOM is a tidy thriller that gives Boris Karloff ample opportunity to mine the thespic territory of the nice guy and the complete and utter rat bastard, and he plays both parts quite believably. The entire cast is game and the story moves at brisk pace, but with all of the plot details that I just recounted, anyone with half a brain in their head can easily predict where all of this is going, but the magic here is in seeing exactly how it reaches its foregone conclusion. I last saw this film in 1975 during an airing on New York's Channel 5, when I was ten years old, and though it had no monsters it held me riveted with its solid story, bleak atmosphere, and Karloff in two roles that were about as far away from Frankenstein's monster as one could get. It's an often-overlooked gem that deserves rediscovery, especially if you love the Universal horror cycle of the 1930's and 1940's. It's a Columbia release, but you get what I mean. 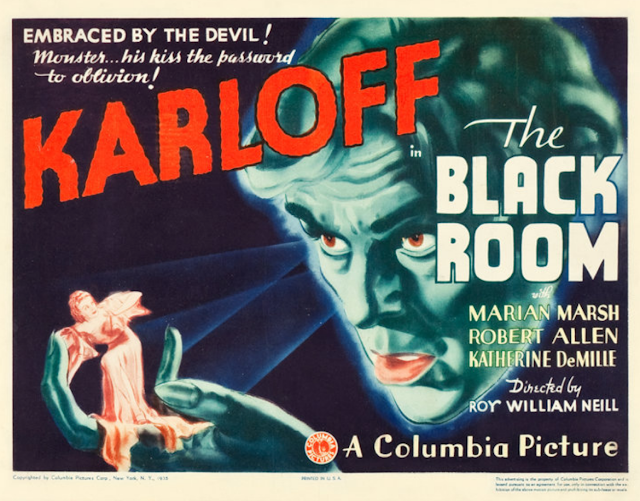