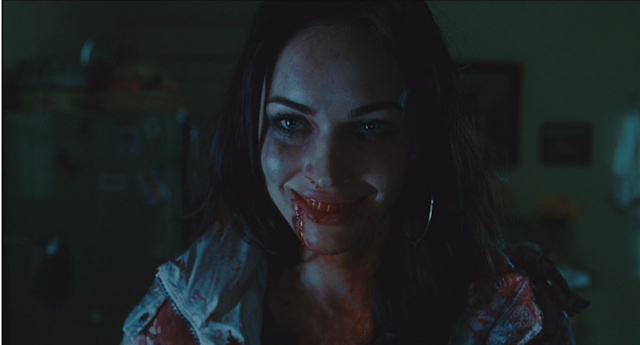 Our story is narrated by our protagonist,  nerdy-but-cute high-schooler Anita "Needy" Lesnicki (Amanda Seyfried), from behind the walls of a Minnesota women's mental institution, where she now resides as a violent inmate whose propensity for assaulting the inmates and the guards earns her frequent trips to solitary.

Needy has been best friends with Jennifer Check (Megan Fox) since their sandbox days, and one is hard-pressed to understand exactly why. Needy is a sweet girl buy Jennifer, one of that breed of sexually-aggressive high school goddesses whose stunning beauty and smokin'-hot bod practically guaranteed she'd end up a cheerleader, could kindly be described as an alpha female "mean girl," and she lords her position and social status over all around her. Needy is no exception, but apparently their very one-sided friendship serves a purpose for the nerdette. 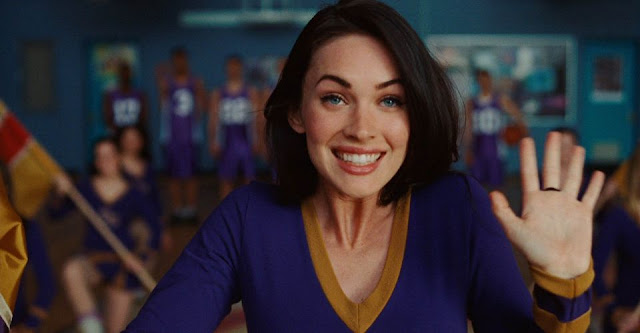 Jennifer: a self-proclaimed "great friend " and a truly horrid human being.

On a night when Needy had intended to spend some quality time with her boyfriend Chip (Johnny Simmons), Jennifer demands Needy's presence as her wing man, as she wants to go to a local club (actually a dive bar) so she can stalk the hunky lead singer of the indie emo band Low Shoulder. This is just the latest time that Jennifer has hijacked Needy, thus derailing Chip's plans, and the exchange between him and Jennifer makes it clear that there is no love lost. Anyway, the underage girls get into the bar (which apparently does not check I.D.s at all) and Jennifer makes a beeline toward the band. She does not even attempt to hide her lady-boner for the singer, while Needy take sin instant dislike to him, considering him a "creep." While Jennifer hits the bar to get drinks for herself and her bestie, Needy overhears the band members discussing Jennifer and taking quite an interest in whether or not she's a virgin. Needy calls them out for that and attempts to keep and eye on the randy Jennifer, but a fire mysteriously breaks out, burning the bar to ground while many people, adults and the girls' classmates, are either immolated or crushed underneath the escaping panicked throng. The girls make their escape the the bathroom window, but the second they are outside the douchey singer takes the hand of a dazed Jennifer and tries to lure her into his bitchin' van. (I'm not certain but she acts likes she's either drunk or roofied.) Needy tries to convince Jennifer not to go with the band, but she's too smitten (and possibly wasted) to resist. As the singer leads her into the van, the singer smirks at Needy before slamming the door and driving off. 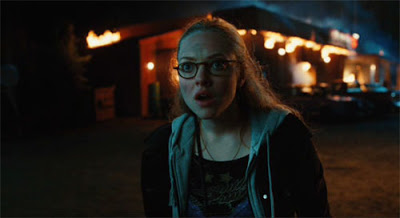 Needy, appalled at her friend ditching her for four strangers.

Understandably freaked-out by the carnage and also by Jennifer leaving with the band for god knows what fate, Needy calls Chip and tells him what happened. While on the phone with Chip, Needy hears an intruder downstairs, and she should be alone in the house because her mom is working the swing shift. The intruder turns out to be Jennifer, who's completely covered in blood and acting strange. She does not answer when the frantic Needy asks her what happened, instead raiding the fridge and devouring a roast chicken from the floor like an animal. She then does some EXORCIST-level projectile vomiting, only the spew is inky/jet-black, with unknown spiny objects within. Jennifer, in a display of inhuman strength, hoists the terrified Needy against the wall and begins sniffing around her neck like a vampire, but she backs off and leaves, leaving a horrified and confused needy to clean up the mess.

The following day, the girls' high school has become a place of communal mourning as the students come together over the loss of friends and family. A shell-shocked Needy is astounded to see Jennifer show up like nothing happened, and her callous disregard for the tragedy is the first clue that Needy notices that tells her her bestie is not right. From there matters escalate, as Jennifer, who is now more alluring than usual, embarks on a killing spree, targeting various males among the student body. Things deteriorate between the girls as Needy, spurred by her best friend's negative traits coming to fore more aggressively, tries to distance herself from Jennifer and reflects on the nature of their long-term so-called friendship. But Jennifer will not leave her alone and, in a weird attempt at keeping the friendship going, she climbs through Needy's window and tries to seduce her. The two start to get hot and heavy but Needy snaps out of it and demands to know just what the hell is going on of late. Jennifer states that there should be no secrets between besties, so she makes with an origin story:

On the night of the fire and her abduction, the members of Low Shoulder drive Jennifer into the deep woods, where Jennifer quite understandably fears that she's about to be gang-raped. Such is not the case, however, as Low Shoulder intends to sacrifice her to dark powers in exchange for success and fame, because things are hard for a struggling indie band. Jennifer pleads for her life, suggesting that the band kidnap some other girl, "someone who knows how to do sex things," as she claims she knows nothing because she's a virgin. The truth of the matter is that she has been quite sexually active since junior high, but she's not gonna tell the band that. Psyched at having a self-proclaimed virgin in their clutches, the guys do their best to scare her, because fear further purifies the ritual, and the end up stabbing Jennifer to death with a Bowie knife. They leave her for dead and drive off to hoped-for success.

Jennifer further explains that she came back from the dead — she does not know the how or the why of it — and during the time since the ritual murder she has discovered that she came back with a number of supernatural powers, such as inhuman strength, levitation, and a Wolverine-like healing factor that makes her damned near unkillable. The only hitch is that she must kill and consume human flesh, preferably male once per month, or her inhuman looks and sexual allure will fade. Appalled, Needy kicks her out and the two begin to grow distant.

Needy puts her nerd skills to good use and researches exactly what happened to Jennifer, studying several books on the occult, witches, and dark rituals, and she concludes that the band botched the ritual by offering an "impure" sacrifice, so a case of demonic transference took place, allowing Jennifer to become a vessel for a murderous succubus. She also discovers that the only way to stop the succubus is to destroy her heart. What follows in the best teen dance horror movie finale since the original CARRIE (1976), as matters escalate, betrayal occurs, and Needy truly comes to terms with the true nature of her relationship with Jennifer. When all is said and done, Needy does what needs to be done, resulting in unexpected side-effects...

I skipped JENNIFER'S BODY when it came out, because it looked like just another shitty "teen" horror outing, starring two of my least favorite female leads, and also because it was universally lambasted upon release. I saw it for the first time yesterday and I am glad to say that it is a deeply misunderstood effort that is far more intelligent than the vox populi would have one believe, and bith Fox and Seyfried are fantastic in their roles. Written by JUNO scribe Diablo Cody, the film displays some of the most believably-written and believable-sound teenagers ever to grace the screen. I'm a guy who has always fit in better with my female friends, so I have seen and heard pretty much everything and seen all the ways that females interact since I was in high school, and Cody's examination of the specific inter-female dynamic seen here rings as very authentic, with Jennifer's demonic side being the sort of cunty inner beast that many high school hotties express, especially when dominating an easily-manipulated less-secure friend, only writ horrifyingly and homicidally large. Jennifer was always evil and bad friend, but it took supernatural madness to wake Needy up to that fact.

I was going to review HEREDITARY as this year's final 31 DAYS OF HORROR entry, but I'd recently heard good things about JENNIFER'S BODY, so I gave it a chance. It's one of the best horror films of the early 2000's and is apparently finding the justice it deserves as it is reexamined and reappraised in a time that is more open to what it has to say. It was not helped by its studio focusing on Megan Fox's hotness and catering to her horny male fan base with the film's marketing, which made it look like another disposable and brainless teen horror flick, instead of the intelligent ultra-dark comedy that it actually is. Of this year's roster of 31 DAYS OF HORROR choices, this is one is my pick for the cream of the crop, an outstanding high school movie and equally superb as a demonic possession story, and I cannot recommend it enough. A must-see for all horror fans, both hardened grown-up "monster kids" and civilians alike. 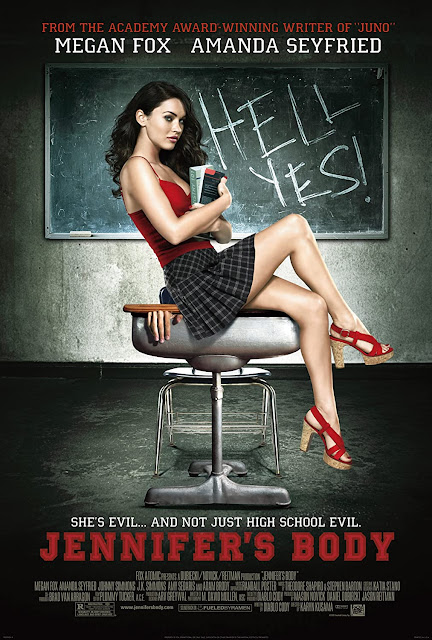 Poster from the theatrical release. Talk about totally mis-marketing your film...

And with that, I bid all of you a safe and Happy Halloween 2020 in spite of the pandemic. If you can't go out, stay in and educate yourself on horror movies. And if you do go out, remember social distancing protocols and wear your mask! (By which I mean a face covering intended for use in the pandemic, ya sillies!) Thanks for reading CINE-MISCREANT and see y'all next year! 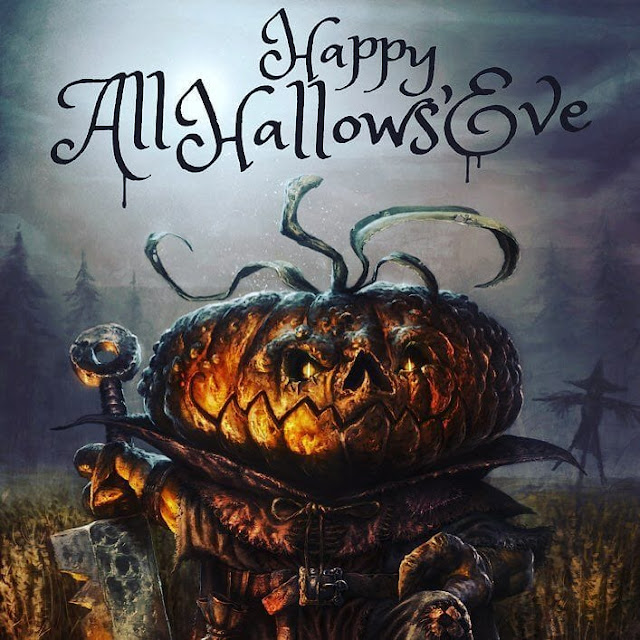 Jesus, have mercy on your soul...