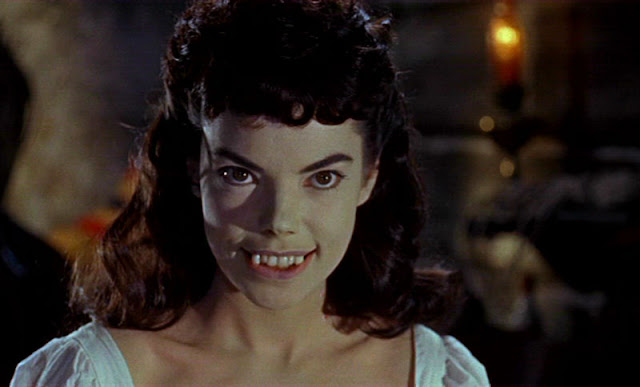 No-bullshit old school vampirism, from back when vampires were figures of raw terror.
After being ditched in a rustic Transylvanian (where else?) village by a shady coachman, Marianne Danielle (Yvonne Monlaur), a pretty French student schoolteacher, finds herself stranded among clearly terrified locals. Luckily (?) for her, the sinister Baroness Meinster (Martita Hunt) rolls up and, hearing of her plight, offers the girl accommodation for the evening at her family's castle (a location whose immediate visual leaves no doubt that diabolical things will occur there. 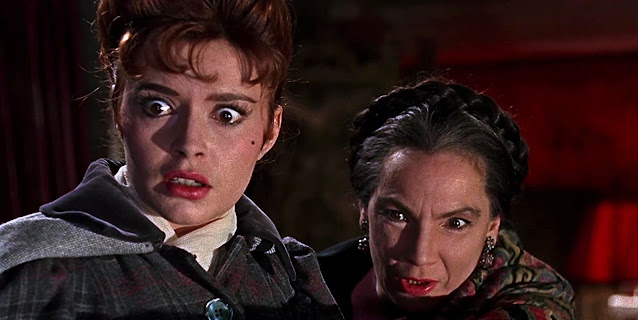 Marianne (Yvonne Monlaur): Hijacked into a waking nightmare.
While settling into her guest room, Marianne goes to the balcony and surveys the outside of the castle, noticing a young man on the balcony across from her. Over supper, the Baroness explains that the man her guest witnessed was her son, whom she claims to be "ill" after he fell under the influence of a certain bad "wicked" associate — alluded to be have been Count Dracula — and whose presence she hides from the locals, having convinced them that he died some time earlier. Later that night, concerned for his well-being and catching a glimpse of the young man seemingly about to hurl himself to his death, Marianne calls out to him, admonishes him not to jump,  and swiftly sneaks out of her room in the middle of the night to confront him. Upon entering his rooms, Marianne meets the handsome young man, who reveals himself as the Baron Meinster (David Peel), a bitter prisoner in his own castle who is prevented from escaping by a shackle attached to his left ankle.
Moved by his plight, Marianne agrees to steal the key  to the shackle from the Baroness's room and free the Baron, and when she obtains it she  throws the key to him on his balcony. He eagerly unlocks the cuff and tells Marianne to get dressed and meet him downstairs, but the Baroness realizes the key has been stolen and confronts Marianne. The Baroness, clearly beside herself with terror, tells Marianne that she has no idea what she has done, at which Marianne flees to meet the Baron. With the Baroness in hot pursuit, Marianne rushes into the arms of the Baron, who is now dressed in a cape and ready to leave, and he orders Marianne to get dressed, as his mother can no longer hurt her. As Marianne heads off to get dressed, the Baron commands his mother to follow him. As she readies to leave, Marianne hears the Baroness's housekeeper wailing in horror that "He's free! HE'S FREE!!!" and when she goes to investigate, the now utterly mad housekeeper shows the foolish, well-intentioned teacher the now-exsanguinated corpse of the Baroness, noting that the Baron has fled into the night (which is announced with the presence of bats being noted and the ominous howling of a wolf). Still unsure of why all of this is going on, Marianne runs off into the night while the housekeeper states to herself that the young Baron must return before the cock crows. Return to his coffin, that is...
The next morning, an unconscious Marianne is found in the woods by a passing coach. It's vampire-slaying expert Dr. Van Helsing (a returning Peter Cushing), who revives the girl and takes her with him back to the tavern where her misadventure began. the good doctor's timing could not have been better, as a local's daughter was killed during the night and now her wake is being performed, so the doctor examines her and discovers — you guessed it — she bears the signature neck wounds of a vampire attack. Van Helsing happened to be on his way to give a lecture on "the cult of the undead" and how it must be stamped out, so, immediately after she has filled him in on every aspect of her story, Van Helsing drops  the young idiot off at the girl's academy that she was on her way to in the first place, establishes himself with the school's director as an authority not to be trifled with, and, with undead suckface ass-kicking kit in hand, heads off to Chateu Meinster. As we all know, a vampire's victims can rise from the dead not long after they are interred, so in no time there are a number blood-imbibers running around for van Helsing to contend with, and let us not forget that there is a conveniently-located academy full of nubile young girls for the Baron to prey upon...

Risen from the grave to join the party...
The first of many sequels to the game-changing HORROR OF DRACULA (1958), THE BRIDES OF DRACULA could have been just another followup cranked out from the cinematic sausage factory to appease lovers of the newfound permissiveness of British horror in the wake of the studio's previous groundbreaking horror entries (the aforementioned Dracula effort and 1957's THE CURSE OF FRANKENSTEIN), but this was made during the period when the soon-to-be-iconic Hammer brand was finding its footing and fired on all cylinders. Despite the absence of Christopher Lee's towering evil as Count Dracula, thanks to the character having been quite decisively killed (yeah, right) in the previous installment, director Terence Fisher crafts what is pretty much Hammer's finest vampire outing outside of the Dracula franchise, ranking alongside THE KISS OF THE VAMPIRE (1963) as the best and most fun of their undead suckface yarns that did not feature Christopher Lee.
As always, Peter Cushing is a study in cool under pressure as Van Helsing takes the fight to the undead with a crusader's gusto and conviction, and he certainly has a lot to deal with in Baron Meinster and his minions. Meinster in an interesting against-type vampire, being blonde and somewhat fey in an era where such figures sported dark hair and a sense of superiority that one imagines an apex predator feels in comparison to its prey. He's almost baby-faced, and one can see how his initially pleasant looks and manner would sway an impressionable young lady. Such is definitely the case with Marianne, who has to be the most brain-dead heroine in a Hammer film up to this point. Her interference in family matters that do not concern her leads to the deaths of the Baroness, a local peasant girl, a stable hand, and one of the academy's students, and she remains about as sharp as a bag of wet mice, even after she is made fully aware of what's going on around her. 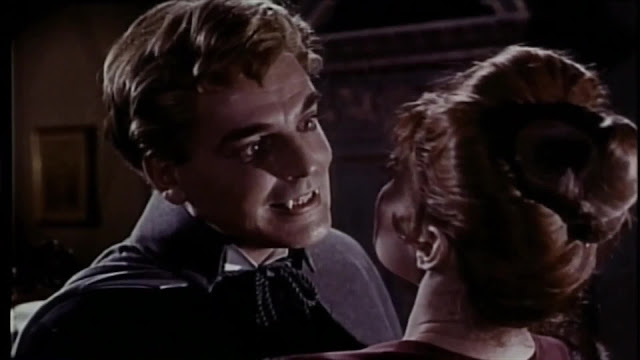 "Une moment, Monsieur Baron... You are ze vampire or something, no?" (Poirrot she is not.)
To sum up, THE BRIDES OF DRACULA is a hoot and a half. It's a textbook vampire story across the board and is in every way a lesson in how to do a sequel right. It does not rehash the previous film to diminishing returns, and it offers the audience old school vampire thrills of the type that pretty much died out on the silver screen by the mid-1970's. Gothic to the core and replete with the signature look and feel of classic Hammer, this one is a must-see, both for Hammer enthusiasts and vampire junkies alike. 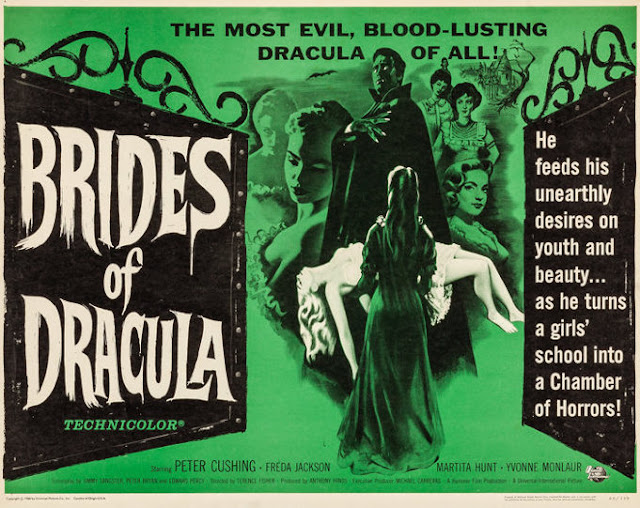